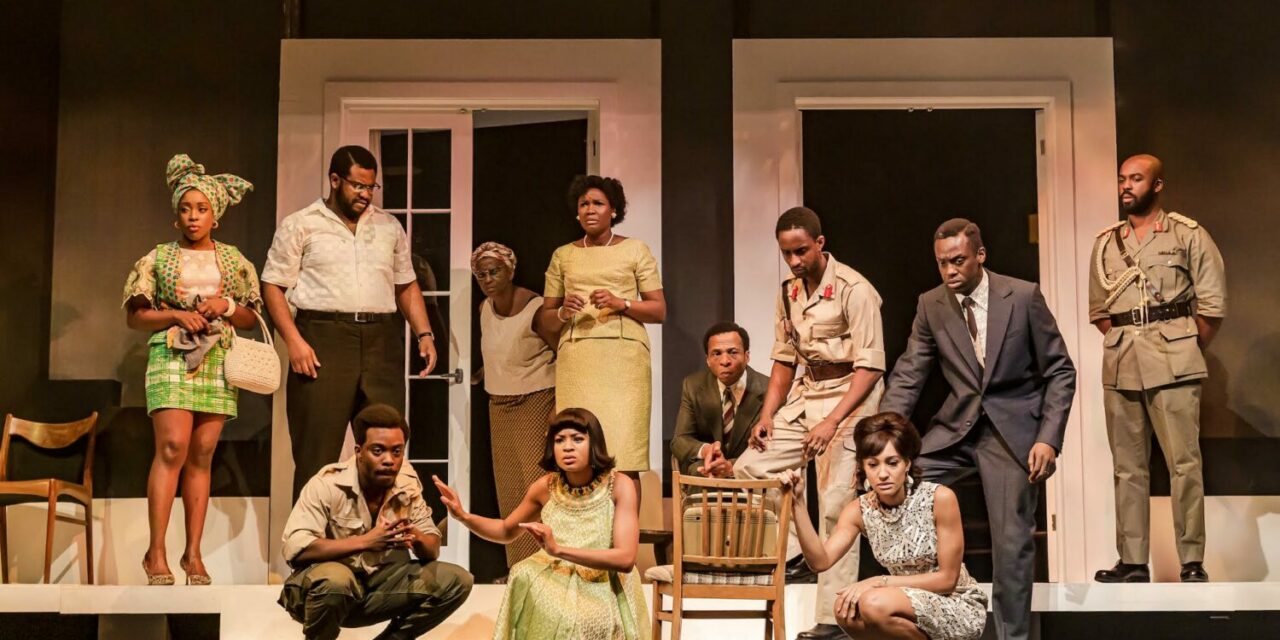 "Three Sisters" at National Theatre. December 2019. Photo by The Other Richard.

In recent years there has been a resurgence of progressive adaptations of Chekhov’s realist classic, “Three Sisters.” Yet none can match the forceful adaptation of Inua Ellam’s sweltering rendition, set against the historical backdrop of the 1967 Nigerian Civil War.

It is common to observe that a new adaptation constitutes a ‘re-imagining’ of a classic. But at the preview of Inua Ellam’s Three Sisters adaptation at London’s National Theatre, one could be forgiven for thinking that it was being performed for the first time. Similar to Stravinsky’s 1901 premier, director Nadia Fall finds dramatic emphasis above and beyond Chekhov’s original staging.

Chekhov famously observed that life is both complex and simple. And so what better description of the Three Sisters might one give today? The play is simple in its premise and deeply complex in its implications. On the surface of it, we witness how an exiled family dreams of a return to Moscow and selects risky romance to ward off political ennui. But the more complex reading, here brought out with great elan in the transposition of the narrative to 1967 Biafra, is that of individual destinies caught up in great societal turmoil.

But this ‘new’ Three Sisters is more than just a transposition onto an exotic locale. In the opening act of the play, the gruff soldier Igwe (Jonathan Ajayi) remarks: “If a man starts talking philosophy then it’s wisdom, whereas when a woman starts philosophizing, then it’s just depression.”

This declaration marks one of the first textual differences between Ellams’ new rendition of Chekhov’s text. In the 1901 version, the script reads, “If a man starts talking philosophy, then it’s either philosophy or sophistry. If a woman starts philosophizing, (…) then it’s just pull my finger.”

So how –and more importantly, why- does Ellam change “pull my finger” to “depression?” The answer reveals the key strengths of the new adaptation. First, “depression” is an ailment of the individual, and the women here are depicted as true individuals, not just stereotypes (the seductress, the manipulator, the pedant, and the virgin).

By distancing himself from the misogynist assumption that women are not capable of philosophy, Ellams brings home the central theme of the play, which is that of three sisters trying to reconcile their personal purpose with that of familial obligation and political responsibility. This means that the tragic element of the three women, is precisely the burden of their individual lives, juxtaposed by the pressures of belonging to a family first, a nation second, and themselves last.

This, of course, is the cross the sisters have to bear, and in time they come to realize the tragedy of their position: if they philosophize, it may lead to depression. But this depression is itself the fruit of a growing knowledge of their situation. As Chekhov wrote, “any idiot can face a crisis, it is day-to-day life that wears you down.”

And yet the female characters we see in this version of Three Sisters are hardly victims. They sing, fight, dance, and tease. And yes, they philosophize. In fact, the many aphorisms voiced in the play sent frequent ripples of approval throughout the thoughtful crowd. And what a crowd it was. The preview of Three Sisters at the National Theatre was attended by a sizable Nigerian and of Nigerian-descent audience. London is after all the home of the United Kingdom’s largest Nigerian population. And that night the theatre was alive with recognition. Whenever a character uttered a Nigerian turn of phrase, the audience responded with audible approval. Code-switching in Chekhov, and why not?

Also, absent from this version are Chekhov’s normative judgments on bad behavior and civic virtue. Instead, the three sisters are quite literally torn into three stereotypically feminine roles: teacher, wife, and wife-to-be.

Lolo is the first and oldest sister, and Sarah Niles plays her with great poise and intelligence. Through her reading, she senses that the dream of an independent Biafra will remain just that, a fiction. And her desire for a genuine transformation of the youth, to which she dedicates her life as a teacher, remains a futile effort. With Cassandra-like pain, she sees her best intentions met first with disbelief, then hostility.

Nne Chukwy, the unhappy wife (was there ever a more common breed on the stage?) is a joy to behold, as Natalie Simpson gives us both scathing glares and vulnerable moments of self-doubt. Could her inability to achieve happiness somehow be of her own doing?  The well-known critique comes to mind, that whereas for men submission is a form of tragedy, for women it is but the name of tradition. Hers was an arranged marriage. One that could never find even an ember of affection to stoke into late love.

Udo, the third, and youngest sister is played with seemingly effortless grace and charm by Racheal Ofori. As in Chekhov’s original, the entirety of the first act takes place on the occasion of her birthday, pre-figuring the soon-to-be-birth of a fledgling nation. Her half-hearted decision to settle for her suitor, Nmeri Ola (Peter Bankolé), is rewarded only with the painful knowledge of his early death, killed in a duel by another suitor. Again and again, the sisters’ choices are rendered irrelevant in a frenzy of bad decisions taken by their male counterparts.

Although here too, Ellam’s disruptive take on the Three Sisters wreaks havoc with our expectations. Is the illicit and burgeoning romance between characters an actual escape from anything, or is it synonymous with the ‘romantic escapade’ of an independent Biafra? It is of course neither. Both the Biafran civil war and the intergenerational conflict, is set against the backdrop of Britain’s colonial legacy and the scars it has wrought upon the Nigerian sense of nationhood.

Also deserving of special mention is the role of Abosede (Natasha) performed with majestic imperviousness by Ronke Adekoluejo. Her turn as the social climber, who slowly undermines and takes over the household, brings to mind Florence Pugh’s star-turn in the 2018 televised adaptation of Vanity Fair. But it was really Anni Dominga, playing the housekeeper Nma who embraced the thin line separating comedy and tragedy. While her comedic timing was slightly off in the opening act, by the third act the audience was actively rooting for her, and howling with laughter at her alternately sweet and yet derisive treatment of the boyish Dimgba (Tobi Bamtefa). Although here again, we can detect a clever re-writing of Chekhov, as the two servant characters, Ferapont and Anfisa, are written as one.

Chekhov enthusiasts will also marvel that this version of the playhouses a tragic miniature within its structure. We are introduced to the servant Oyiridiya, played with searing anger by Dianna Yekkini, who asks anyone who will listen for a gun. She seeks revenge against the killers of her husband. In the final act, she disappears. We are told she has found a gun and been killed. By which side? By both. As she approached the Nigerian troops, the French mercenaries, and the Biafran resistance, her attempt at revenge is gunned down in an instance. Finally, even the family home is lost, forfeit all too easily at the gambling table. The sisters are evicted, left to stand alone in the dusty street.

The tragedy is that of a family torn between a longing for collective and particular belonging. It is to director Nadia Fall’s great credit, that she elevates the play beyond its usual staging, which has over the years become rather more like a Beckettian farce, and instead restores it to its properly tragic dimensions. That is, in the contradictory seduction of national pride versus individual ‘purpose’, the family ‘scene’ and the wilderness, she fully visualizes the manner in which the characters are first lifted up, then ground down under history’s rapidly turning wheels.

The axis of this dramatic movement is to be found in the short-lived Republic of Biafra. The Biafran Civil war is more than just a convenient historical backdrop. Not just an abstract warzone like Brecht’s Mother Courage or Beckett’s Waiting for Godot. The Biafran war for independence is much more than just a set-piece. Instead, in the context of the civil war, the intersectionality of race, class, gender, and colonial history come into clear and vivid focus. This is more than what one would reasonably expect from a performance of Three Sisters. Can the play bear the weight of so much interpretation? The answer is a resounding yes. In fact, one might even go as far as saying that the play comes to fruition. Like Copernicus, who needed Kepler to complete his famous ‘turn’, or Hegel who thought Kant to his logical conclusion, so too does Ellam bring to Chekhov a certain continuation without which the work would simply not be complete.

Like Chekhov’s infamous gun, Three Sisters itself has lain in wait, anticipating the time when it will inevitably be fired. And it is in this resoundingly explosive and startling adaptation, that the contents of the original are discharged, and the full potential of the loaded play bursts forth into contemporary significance. The National Theatre has rightly loaded its artistic barrels with these diverse and thrilling actors and has produced an absolute stunner of a performance. Go see it, because this shot will hit you square in the chest and ring loud in your ears for a long time to come. 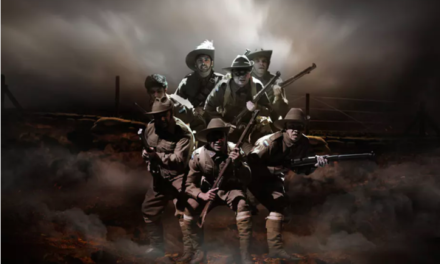