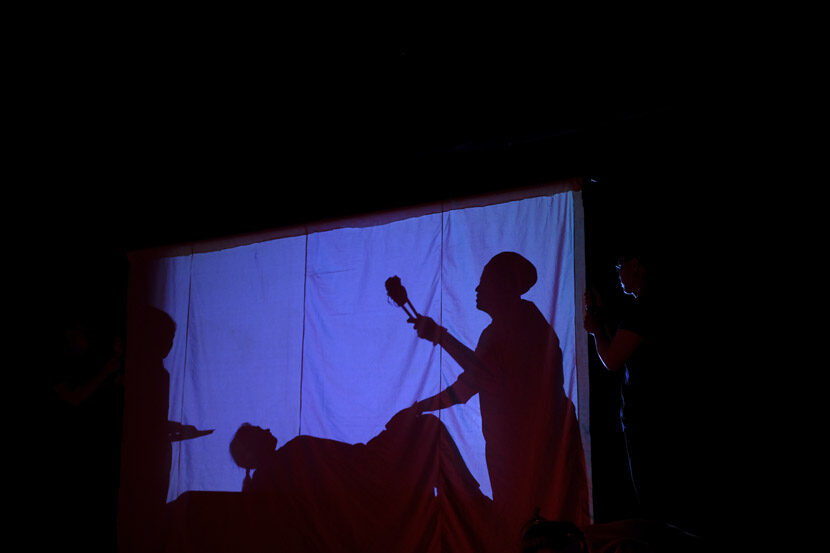 “Maternity Chronicle” at Star Theatre in Beijing, May 11, 2019. Photo by Wu Huiyuan/Sixth Tone.

The women of Mulan Community Service Center share the stories of their lives as mothers and migrants in a new stage play.

BEIJING — Onstage behind a thin cloth screen, the woman on the operating table shudders as the doctor dilates her cervix and begins to remove the contents of her womb. In front of the screen, three other performers twist and turn, their faces contorted in pain.

Some members of the audience — most of whom are university students — find this too distressing to witness and cover their eyes.

I’m sorry, my baby, the woman says in her monologue following the late-term abortion. You already have two older brothers and we are such a poor family. If we have you born, there will be so much toil for me and your father. Please forgive Mama.

This amateur theater production was performed in May by a group of female migrant workers in Beijing to an audience of just over 100 people at Star Theatre in the city’s Xicheng District. The script draws from their lives, spotlighting the struggles and secrets that reside at the intersection of their experiences as mothers and migrants.

By the end of 2018, there were over 288 million migrant workers in cities across China, 35% of whom were women. Many live in precarious circumstances, alienated from the traditional social structure of the village, but unable to fully integrate into the ecosystem of the city due to economic, social, and administrative barriers.

The play centers on Xiaoyu, who comes from a rural village in southwestern China. She gets married and has her first child in 1990, when she as just 17. The play opens when she is still in the countryside and facing her third pregnancy — an unexpected one, due to the expulsion of her contraceptive intrauterine device (IUD). At a local clinic, she faces a dilemma: The family has two sons and cannot afford another child, but she also cannot afford to take any time off from farming.

By the time the wheat harvest is complete, Xiaoyu is so far along that the abortion can only be performed by inducing labor.

Xiaoyu’s story emerged from a series of discussions organized by Mulan Community Service Center, an organization supporting female migrant workers in Beijing. At one Mulan talk in 2017 that focused on breastfeeding, many participants shared their most unspeakable stories for the first time. 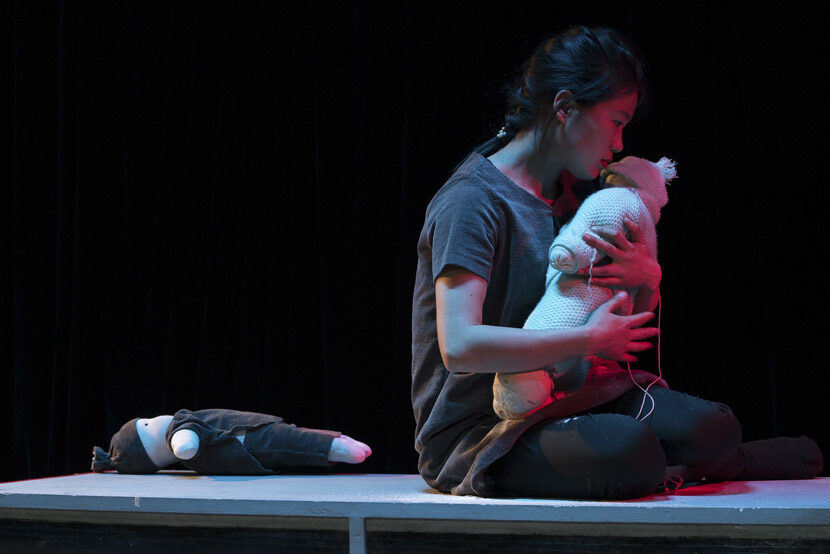 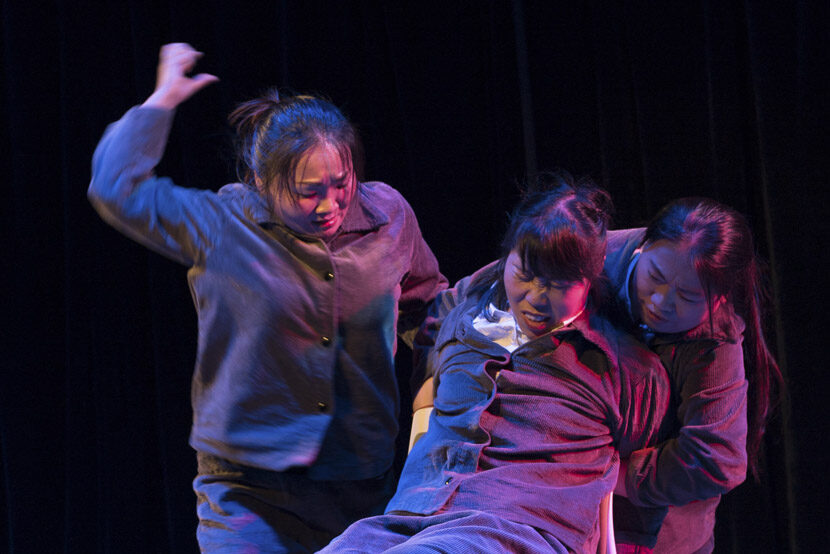 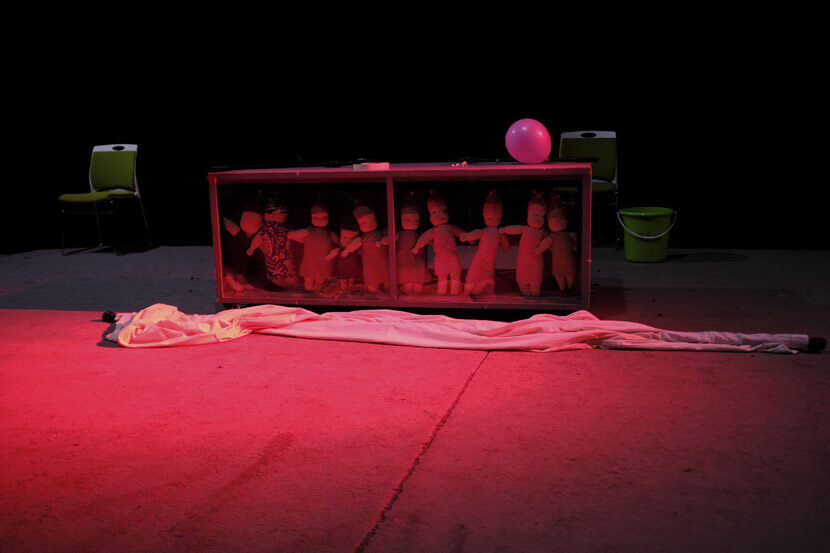 One 46-year-old woman — who wishes to remain unnamed to protect her privacy — spoke of her three unexpected pregnancies and her failed attempts to terminate them by running with heavy loads and beating her abdomen with her fists. She is the inspiration for Xiaoyu.

The bamboo basket we used to carry sweet potatoes is this big. A full basket weighs 100 jin (50 kg). I carried it and ran and ran, hoping there would be a miscarriage, but it did not happen.

The sloped terrace is this high. There was a huge gap between the terrace above and the terrace below. I jumped from one above, but I still did not miscarry.

The displacement or expulsion of IUDs, the tearing of the perineum, the pain of labor, the agony of deciding whether to terminate a pregnancy — though many women share these experiences, they are rarely discussed, especially in the public arena.

“The pain goes deeper for women of our class due to economic pressures. For example, to save money, some wouldn’t even go to a hospital for an abortion,” says Mulan co-founder Qi Lixia.

In 2002, Xiaoyu and her husband move to Beijing, and she takes whatever work she can get — babysitting, cleaning, operating elevators — while trying to save money for her sons’ futures. In her hometown, men are expected to have a house, car, and cash betrothal gifts of around 150,000 yuan (then roughly $18,000) before proposing marriage, so with two sons to provide for, Xiaoyu can only hope that there will be some money left for her old age. Like many aging migrant workers, Xiaoyu has no pension.

The character of Xiaoyu epitomizes China’s first generation of migrant workers, who were born in the 1970s or earlier. Their time is marked by seasonal shifts between their identities as farmers in the countryside and workers in the cities.

Yet while Xiaoyu is tethered to her family responsibilities and her financial circumstances, her character is not simply that of a passive object, sent to the city to pursue economic goals. She has her own struggles and dreams.

I don’t want my life to be like that of a snail, carrying my home wherever I go, Xiaoyu sings in the play’s opening song. I want my own sky, unlike a kite, unable to decide its own direction.

The woman that Xiaoyu was modeled on says she came up with the metaphor of the snail in the lyrics. 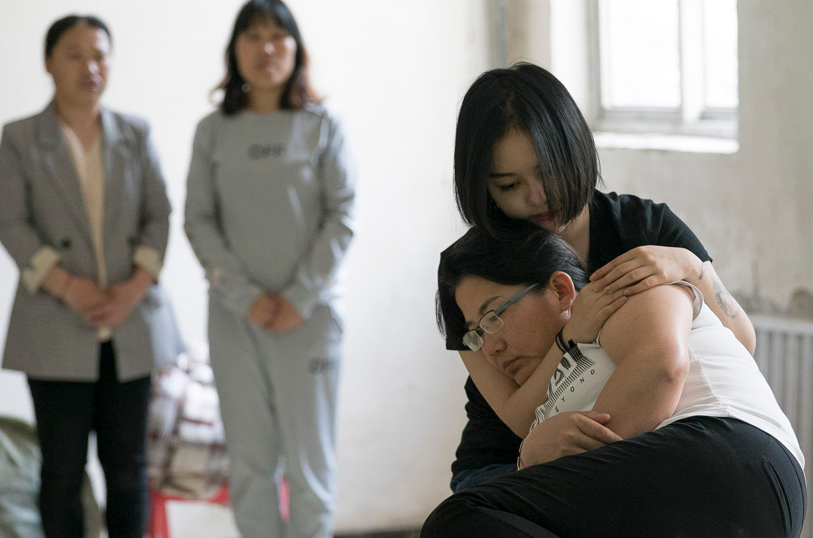 Where Class, Gender, and Migration Intersect

When mass rural-urban migration started in the 1970s, female migrant workers were called dagongmei, or working sisters. This term — then newly coined — “implies an inferior working identity inscribed with capitalist labor relations and sexual relations,” according to Hong Kong sociologist Pun Ngai in her book about women factory workers.

Yet working sisters are also known for their powerful contributions to arts and literature.

When Qi quit her job as a primary school teacher in her hometown in central China’s Henan province and went to work in a factory in the southern city of Shenzhen in 2002, she was inspired by literature written by migrant workers. She hoped to find a new way of life in the “vibrant south”. After a couple of years, however, the harsh work practices of the factories had dampened her ambition. At the time, appeals for better working conditions were gaining momentum, so being both cautious and curious, Qi participated in some of the activities. It was in this nascent movement that she started to notice how vulnerable female workers were compared with their male colleagues. 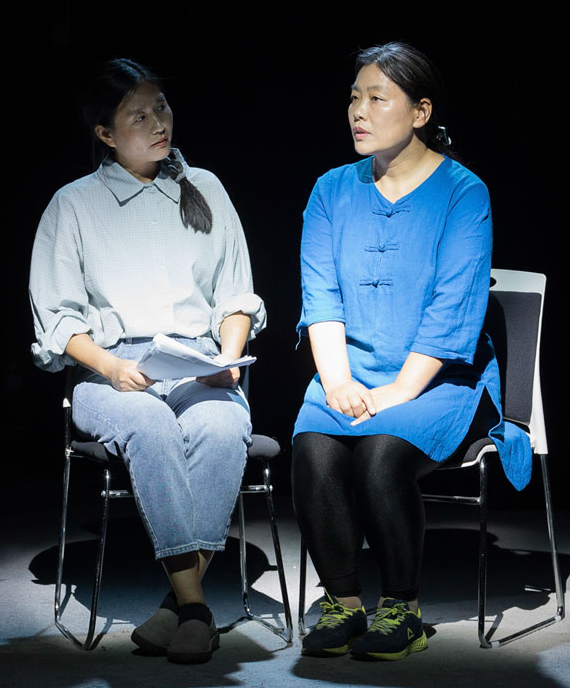 “There were incidents of sexual harassment and pregnancies before marriage. In one case, the woman threw her newborn baby from the fifth floor,” she recalls.

In 2010, Qi and three other “sisters,” as they call each other, established Mulan Community Service Center. They named the organization after the legendary female warrior Hua Mulan, with the hope that their group would empower female migrant workers through networking and promoting awareness of issues like gender equality and sexual harassment.

A scroll hangs on the wall of their three-room headquarters in northern Beijing’s Changping District, inked with a Chinese translation of “For Every Woman,” a 1973 poem by Nancy R. Smith.

For every woman who feels “tied down” by her children,
there is a man who is denied the full pleasures of shared parenthood.

For every woman who is denied meaningful employment or equal pay,
there is a man who must bear full financial responsibility for another human being, reads part of the original poem.

Dongmei — who uses a pseudonym to protect her privacy — is one of several actors playing Xiaoyu in the play. She had no stage experience before this production, but Xiaoyu’s story resonates with her: Dongmei, too, is a migrant — hailing from a city in northern Hebei province, two hours away from Beijing by high-speed train — and the mother of an 18-year-old daughter and a 12-year-old son.

“Because I have similar experiences, I know the pain of losing a child,” she tells Sixth Tone.

Though Dongmei worked for job agencies when she first came to Beijing in 2004, after her children were born, she became a full-time mother. She recalls an argument with her husband several years ago, in which he remarked that he earned all the family’s income. Although she knew that he was just venting his anger, it pricked her heart.

The second day after the stage play, on Mothers’ Day, Dongmei took a part-time job promoting baby formula at a supermarket near their home in northern Beijing. She was paid 120 yuan for working from 8 a.m. to 5 p.m. “This amount of money can’t cover the rent. But I can use it to buy some fruit, or to pay for my own three meals,” she says. “Deep in my heart, I feel that I don’t need to ask for money every day anymore. It’s not that I can’t make money, but that first I need to fulfill my duty of taking care of the children. I proved myself.”

The center’s activities include a reading group, classes for children, and recreational events. They have put on several stage plays in addition to the one about childbearing and motherhood, all based on the women’s own experiences and performed by members of the community. In one play, they talk about the difficulty of getting their children into schools in Beijing. In another, they speak of being frequently forced to move within the city due to demolitions and urban construction projects.

Zhao Zhiyong, an associate professor at the Central Academy of Drama, is the director and head writer of the play about childbearing. Zhao was annoyed by some of the comments he saw online after the play’s debut in December. “Most of the comments on (microblogging platform) Weibo are based on ignorance. Some asked, ‘Didn’t you know that you can buy condoms to avoid such frequent abortions?’” he says. “They have this prejudice that migrant workers bring these problems on themselves because they are uncivilized.” He believes that if the people who made the comments had actually come to watch the performance, they would show less cynicism. 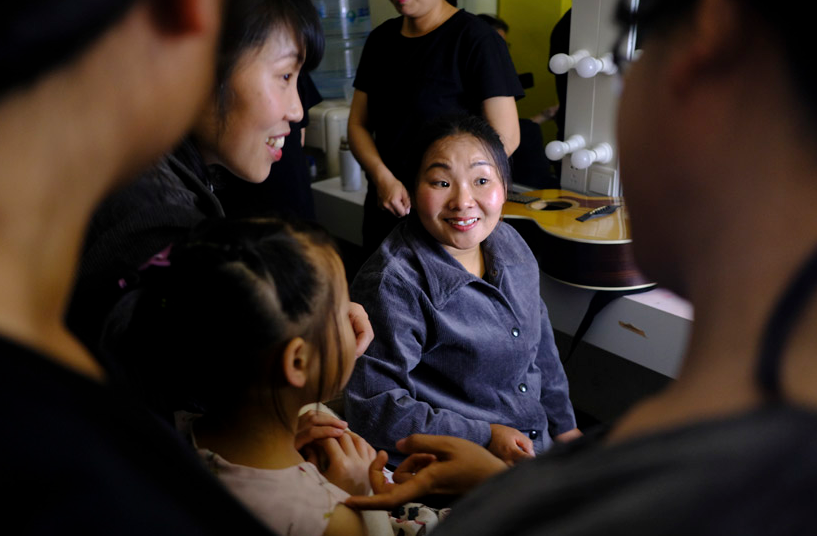 Actors chat with each other backstage in Beijing, May 11, 2019. Wu Huiyuan/Sixth Tone

In 2017, an autobiographical essay by migrant worker Fan Yusu went viral after being published on the internet. Fan, who comes from central China’s Hubei province and works as a domestic helper in Beijing, wrote about her family, her unhappy marriage, and her effort to live a dignified life in the capital. The essay touched readers from various walks of life.

“It is a slow process to change public perceptions about this group,” Zhao says, though the migrant workers themselves have strong self-awareness as a class and a community.

During the audience interaction segment after the performance, Qi explains why they created this play. “We have our own pleasure, anger, sorrow, and joy. We have our own needs and dreams,” she says. “So we organized our own performance troupe. We sing songs that we wrote ourselves; we dance the dances that we choreographed ourselves. When we express our own voices, more people will know the true us.”

This article originally appeared on Sixth Tone and has been reposted with permission. 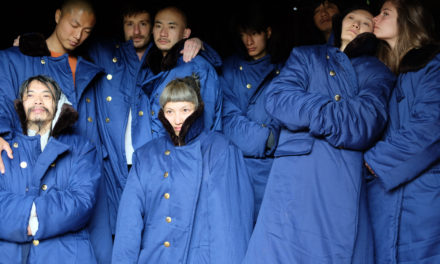