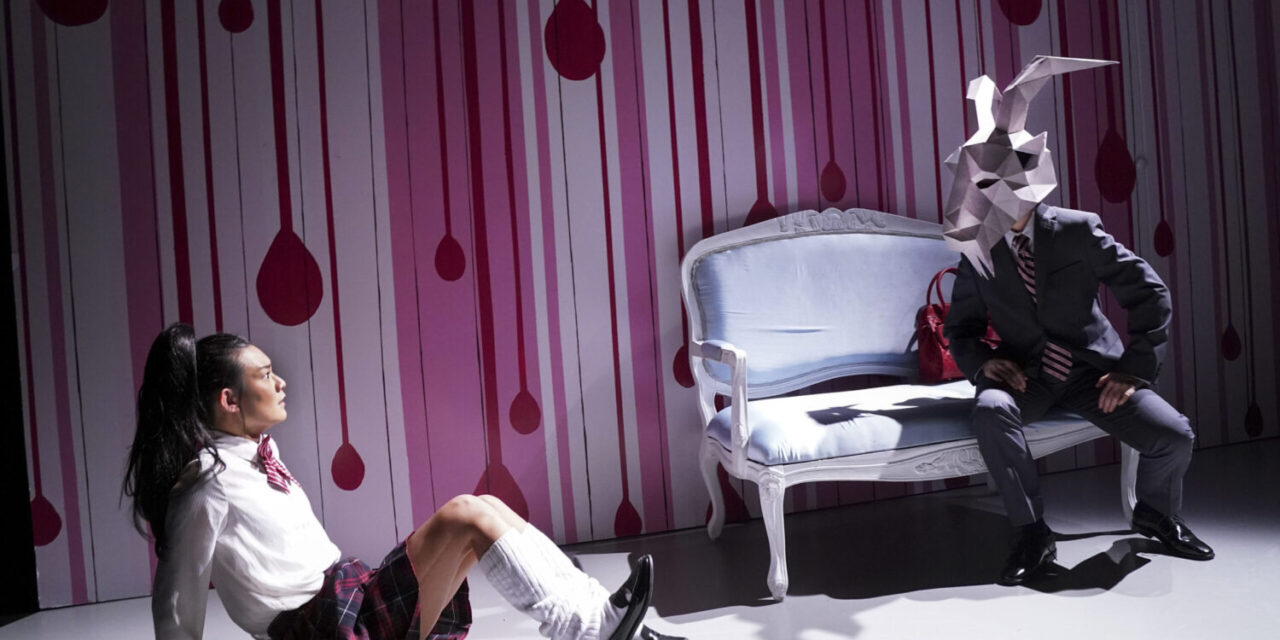 Suicide Forest, written by and starring Haruna Lee is a trippy meditation on the extremes of Japanese culture. A joint production of Bushwick Starr and the Asian American theatre company Ma-Yi, Suicide Forest brings American audiences to a constructed fantasy world, the Japan of dreams and nightmares. The dramatis personae are archetypes more than characters. Eddy Toru Ohno plays a harried and oppressed salaryman, so emotionally constrained that he is practically folded in half, hunched in the back and bent at the knees. Dawn Akemi Saito and Ako play his daughters, decorated and infantilized in the pastel and glittery “fairy kei” fashion, the infantilizing function of the style made all the more apparent because the actors are in their sixties. Lee plays their friend Azusa, who exists in a largely immobilized and emotionless state except when, in complete privacy, giving voice to the trauma they’ve endured through abstracted movements and non-verbal exclamations. Lee’s play explores the drive to conformity, and the physical, emotional and mental havoc that such a drive wreaks. The title is a reference to Aokigahara, a forest at the base of Mount Fuji that has for decades been a site for death by suicide. In fact, the association of the forest with suicide is a self-replicating problem. Literary and pop cultural products as well as news media concerned with the phenomenon seem to have only added to the allure; today, hikers in Aokigahara encounter trail-marking signs that include the phone numbers of suicide crisis hotlines. The World Health Organization lists Japan as number thirty in a global ranking of national suicide rates, but the problem may be more qualitative than quantitative. In Lee’s play, suicide, along with sexuality, entertainment and professionalism, are aestheticized beyond the point of purpose.

The production is strongest where Lee’s questions—about gender, sex and power— are explored using the theatrical tools at their disposal. The design is phenomenal. Jian Jung’s imaginative set was both surreal and provocative. Most memorable were Alice Tavener’s costumes. The aforementioned fairy kei get-ups were a shimmering nightmare of baby pinks and blues; imagine Alice in Wonderland on the night she’s determined to lose her virginity, at a rave. Better yet were pieces fanciful, full-bodied and furry; I won’t ruin the surprise because, thanks to Jeanette Oi-Syk Yew’s powerful lighting choices, these costumes account for one of the most delightful moments of the show. Another marvelous sequence presents “Sea of Trees,” an over-the-top Japanese prank show that humiliates unwitting contestants for maximum high-jinx. (The title of the show-within-the show is a nickname for Aokigahara.) While this bit, like a fair percentage of the show, is performed in Japanese without subtitles, a nice touch for reversing minority status to an American audience, summaries of the game show participants’ comments appear on a screen, mocking both corporate culture and reality tv. The form and meaning are recognizable even when the content is, for many in the audience, not comprehensible. The script was similarly inventive. Liberated from the confines of plot and character development, Suicide Forest presents all our worst nightmares converging at once, and contrasts the differences between those nightmares. As Margaret Atwood pithily put it, “Men are afraid that women will laugh at them. Women are afraid that men will kill them.” What Lee’s play does best is to ask the follow-up question: what does it mean to be a man or a woman? One possible answer the play hilariously proposes is: I am a man! I eat meat! Unfortunately, Lee seems not to have faith in their own imaginative creation, or, to put it less generously, decides to indulge in the autobiographical material that the play so effectively transforms. After what should have been the last act, Lee breaks the fourth wall to talk about the uncategorizability of the mixed-race experience and the immigrant experience. They also ask the other cast members to do the same, at which point it becomes clear that Lee alone is struggling with this issue. Moreover, this confessional moment introduces conflicts that were not present before. Haruna Lee’s mother, who appears in the play as a ghostly dancing figure, is Japanese; their father was Taiwanese-American. But the play takes place in Japan, and the characters are Japanese. I do see how Lee’s struggle with “not being Japanese enough” echoes the experiences of their characters, who do not feel masculine or feminine enough, or successful enough. But I found myself wishing the entire performance had stayed in the Japan-of-our-dreams-and-nightmares, without abruptly and unnaturally bringing us back to the United States-of-our-reality. It may be unfair to hold Lee’s play, which is thoroughly modern, to old-fashioned standards. But perhaps there is something to be said for the classical unities: of action, of time and of place. Suicide Forest provides that. Let us remain there.