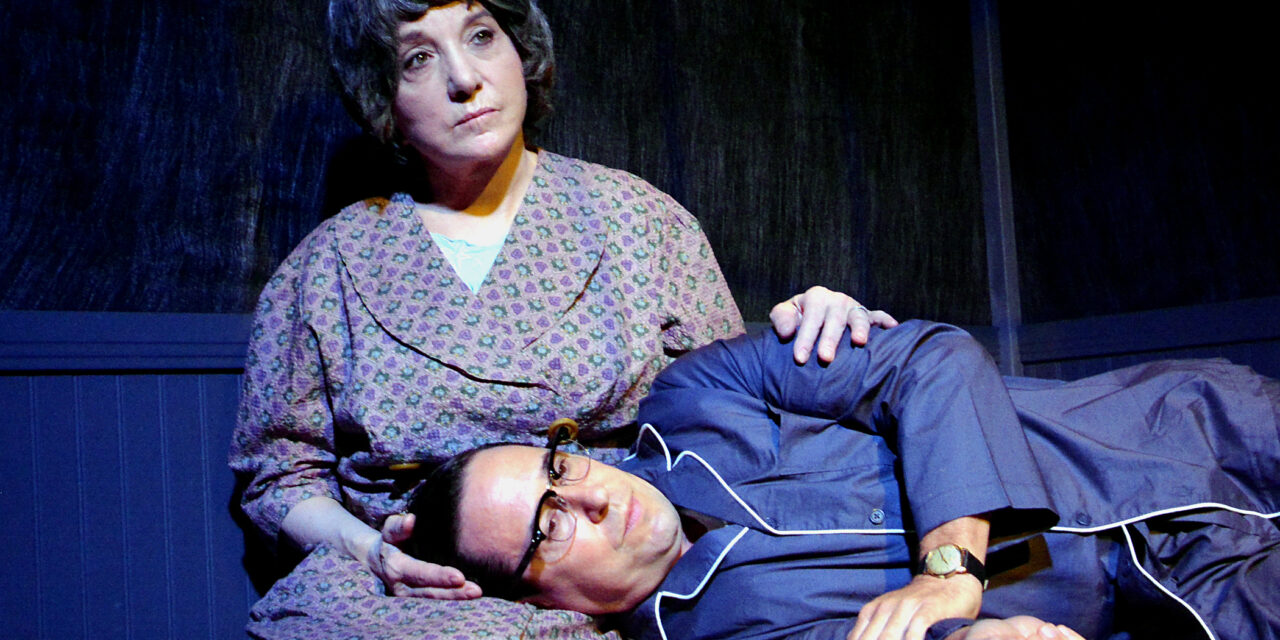 Lee Garlington as Linda Loman and Rob Morrow as Willy Loman in the Ruskin Group Theatre production of "Death of a Salesman." Photo by Ed Krieger.

“A small man can be just as exhausted as a great man.” – Linda Loman.

The Ruskin Theatre Group’s production of Death of a Salesman in Santa Monica, CA confronts us with uncomfortable truths and questions about the American Dream that makes this 70-year-old play feel as challenging and immediate as if Arthur Miller wrote it for us yesterday.  Mike Reilly directs a superb cast in the theatre’s delightfully intimate space situated across from the Santa Monica Airport.  He and his design team do a fantastic job of using the space to bring the claustrophobic elements of the Loman’s living situation into the audience’s experience.  There may not be apartment buildings looming on every side, but there are audience members on two sides of the playing space and walls that are made of translucent materials that support the idea that these buildings are made of tissue paper.  There is no private place to be. 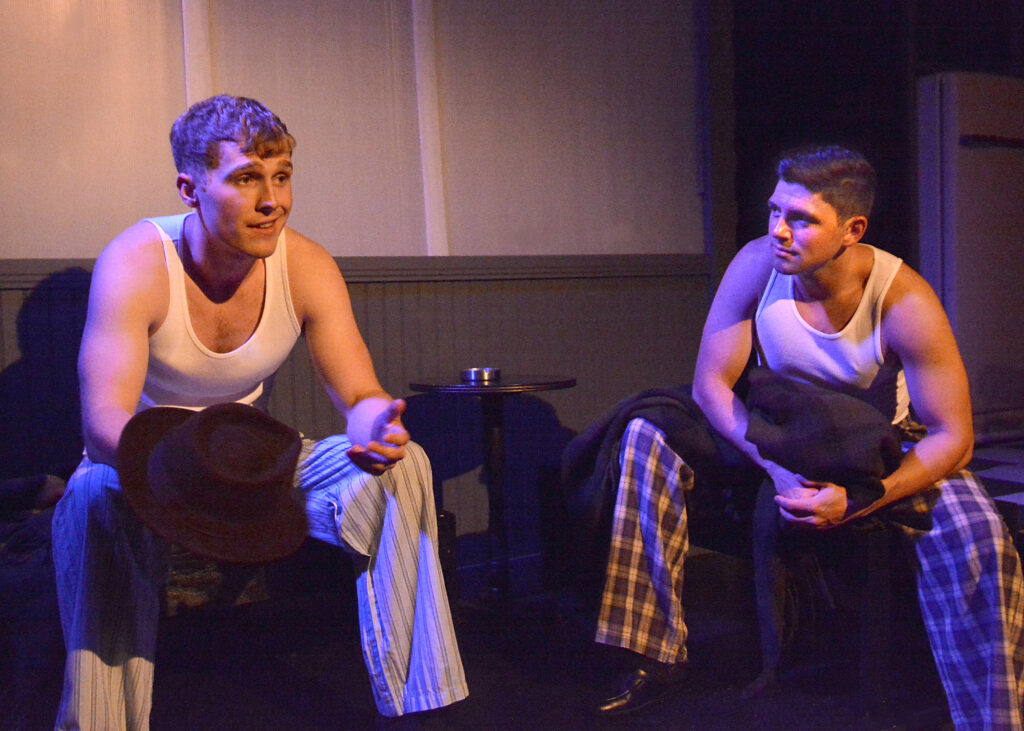 That’s bound to be a challenge for this family of secret-keepers.  Willy hides his true life on the road from his family, his son Biff carries the burden of two secrets that can only crush the family is revealed, his youngest son Happy pretends to be, well, happy, even though he’s lonely and just as lost as the other men in the family and the matriarch, Linda Loman, protects her husband and her children from the truth about their sometimes dire financial straits and Willy’s suicidal tendencies.  Like Willy Loman, Rob Morrow transforms himself into an older man with the posture of a defeated soul and the shuffling feet to match.  His energy has been sapped, he’s certain people laugh at him when he goes out on sales calls and he is haunted by the past when things felt lighter and opportunities appeared to be everywhere for the taking. 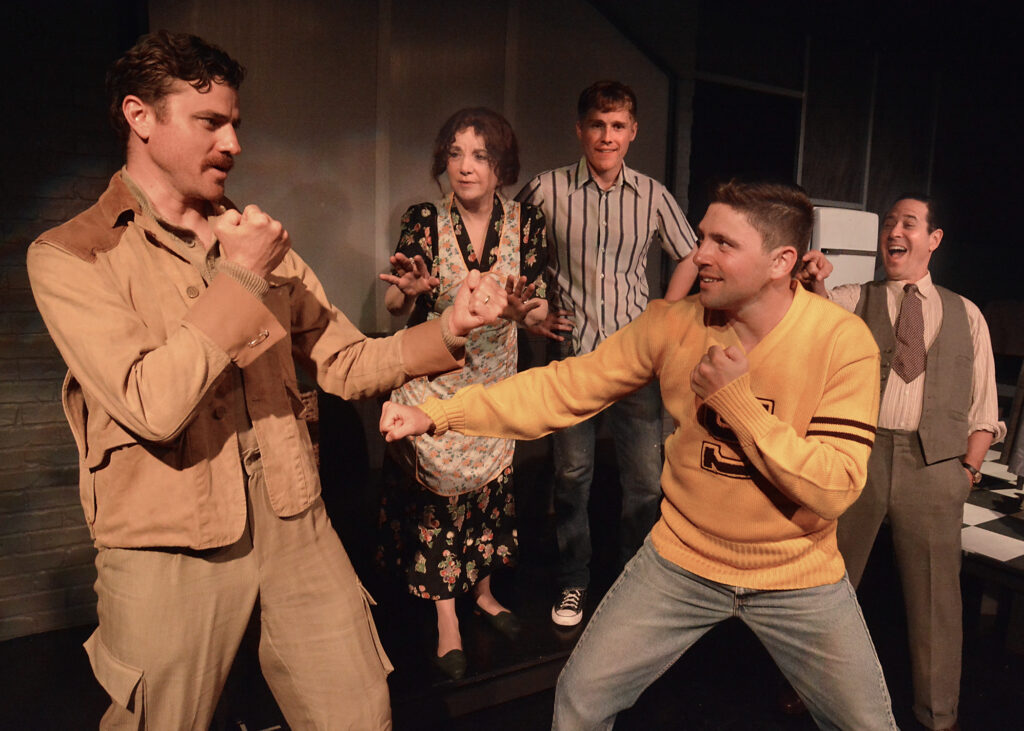 He hears snippets of a flute playing that we learn must be a memory of his father who sold them before abandoning his children, recalls happier times with his sons when they were younger and conjures up the figure of his brother, Uncle Ben (played by Donovan Patton).  Ben is everything the books have told us a man should be – rugged, adventurous, determined and confident of his path.  That is also everything Willy is not and Morrow succeeds in walking that delicate tightrope that has Willy wobbling from being certain his dreams still can come true vicariously through his sons over to an ever-deepening level of despair where Willy Loman feels he is ‘always in a race with the junkyard.’  Patton’s Ben is always checking his pocket watch, eager to move on – a reminder that time is relentless by nature.  While speaking to Ben, Morrow tells Patton that, “Dad left when I was such a baby and I never had a chance to talk to him and I still feel – kind of temporary about myself.”

We could write volumes about what it means for a child to be abandoned by a father [and whether they want to or not, reporters are having to do just that today when they cover what is happening at the border] and it would be a mistake to try to distill Willy Loman down to this one experience but there is something illuminating in the notion of him not knowing who he is in his sixties – especially when we recall his reaction to the idea that Biff still hasn’t found himself at the age of thirty-five [he’s not thrilled].  Willy believes that being liked is everything in life and business – not just liked but ‘well-liked.’  It is easy to imagine that he once was the man he describes himself to be for he is able to not only charm his sons but to earn the enduring admiration of his wife and the support of his neighbor and friend Charley (played by Jack Merrill). 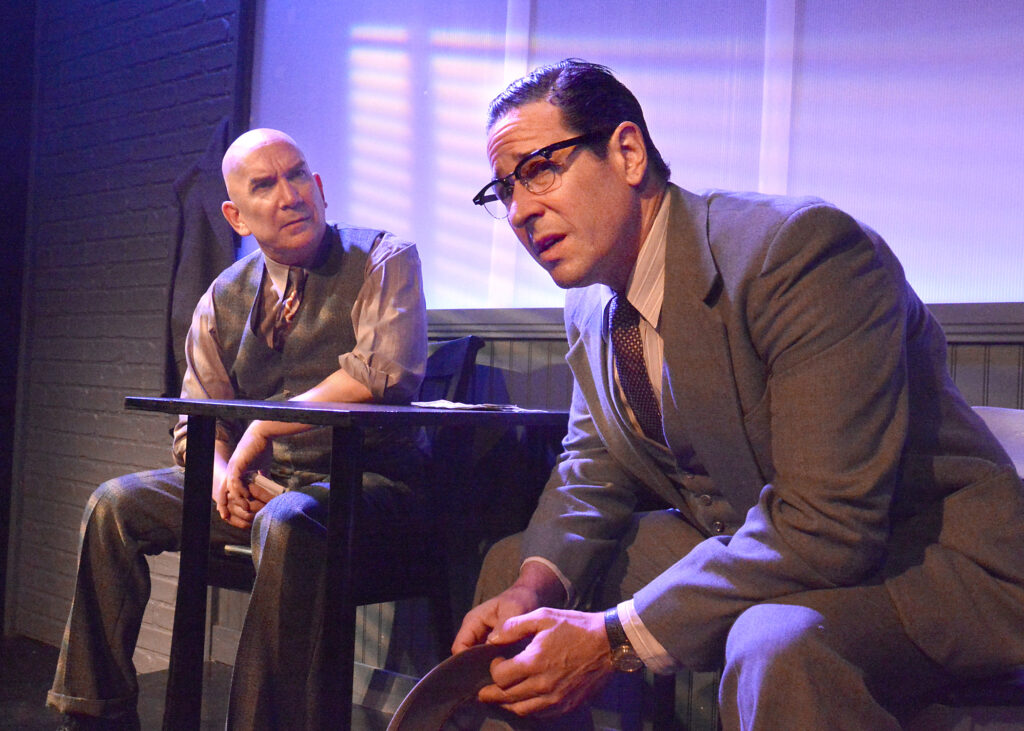 Charley is a no-nonsense kind of man who cared less about being liked and became a successful businessman along with his son Bernard (understudy William J. Beaumont did a great job shifting from his over-eager high school self to the stoic businessman he becomes in the role at this performance).  Through Merrill, Charley’s ability to endure Willy’s increasing mood swings while supporting the man financially moves one to near tears but it is Lee Garlington’s performance as Linda Loman that takes your breath away.  She delivers a deeply emotional portrayal that is truly fierce in the quietest fashion.  With one look she is able to relate a sea of information about Linda Loman’s life and world.  When she cries, you feel it resonate in your bones.  Morrow’s Willy doesn’t shy away from the brutality of the act when he tells her to shut up repeatedly and yet the chemistry between the couple makes it easy for us to accept [if not to understand] her devotion to him just as it is easy to understand [if not accept, given his other women] his love for her.  She is as able to see her sons for who they are as she is to see her husband.  When Happy assures her that he’s ‘gonna get married’ – she tells him to go to bed. 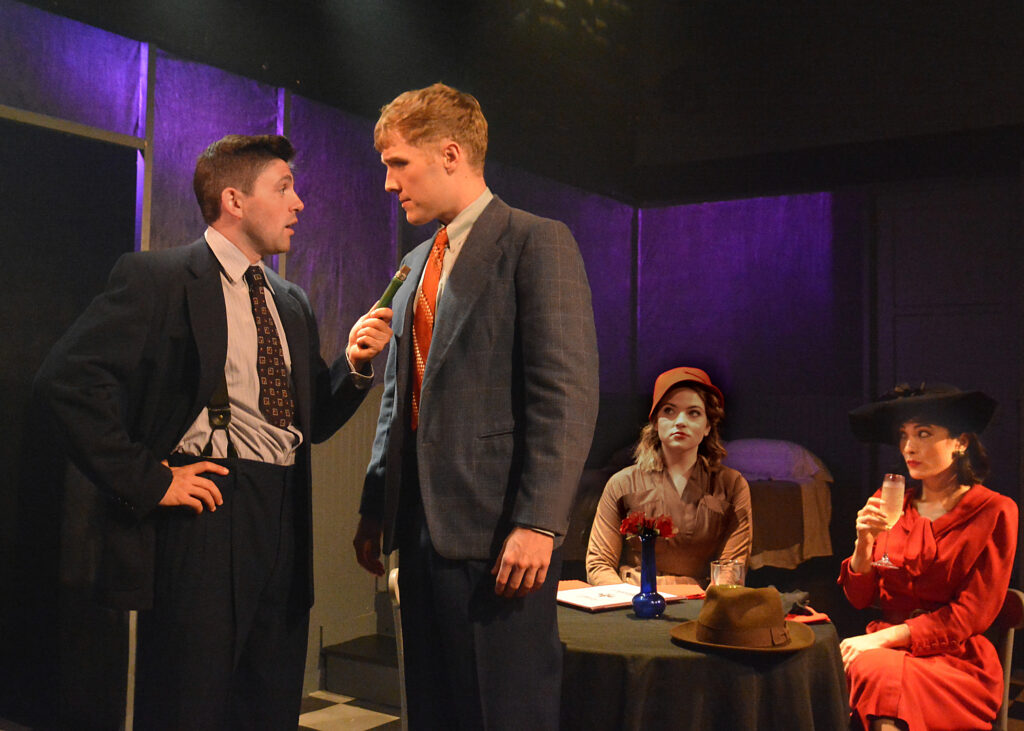 It can be cringe-inducing to listen to Hap laugh early on as he talks about a girl he ‘ruined’ who happens to be engaged to be married to a co-worker that is on track to secure a vice presidency in their company but Dylan Rourke’s portrayal of the younger of the Loman sons eloquently expresses how adrift Happy is in his own apparent success.  In Willy’s vision of the day he brought the punching bag home for the boys, Rourke repeatedly drops to the ground to engage in various exercises and ask his father to notice how much weight he’s been losing.  Willy only has eyes for Biff, however, the son he believed could only be a huge success.

As Biff, Robert Adamson is in the unenviable position of having to protect a father he no longer respects when he surprises Willy on the road and discovers him with The Woman (played by Kerry Knupe, whose laugh has the ring of all things beautiful and seedy about it).  He also admits that he spent time in prison for theft – a trait that Willy seems to have encouraged in Biff from a young age, whether he realizes it or not.  This puts him in conflict with his mother and fuels a fight that culminates in the crushing moment when Biff cries in his father’s arms.  “Pop, I’m nothing!  I’m nothing, Pop.  Can’t you understand that?” he begs Willy – but all Willy can take from his son’s emotional break is that the boy likes him. 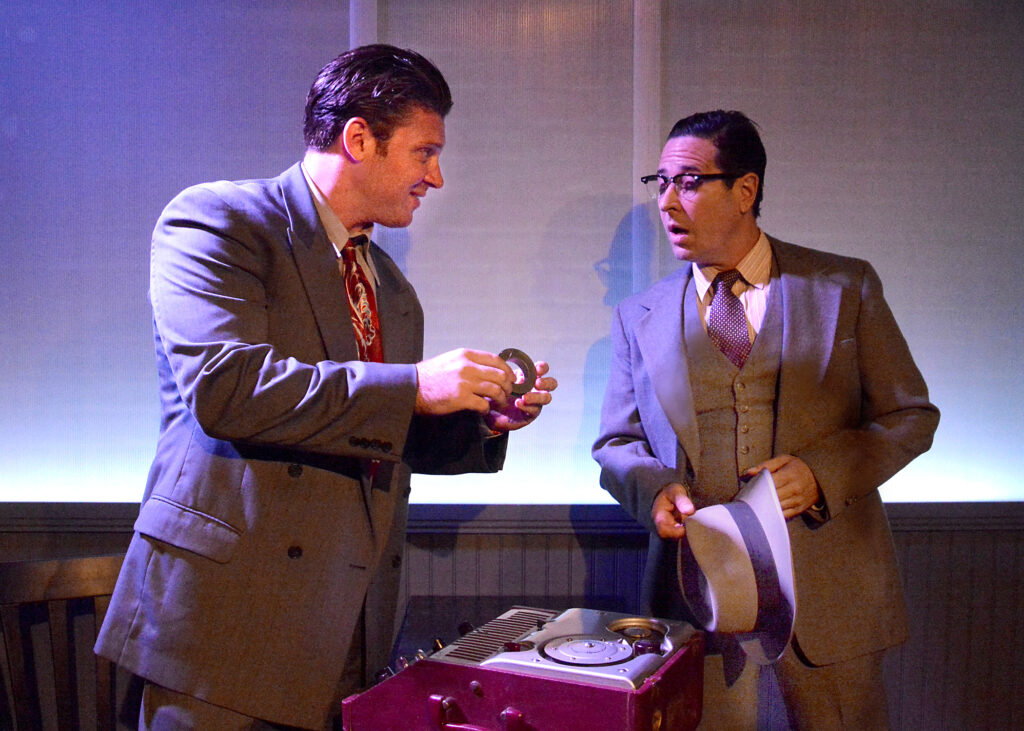 Perhaps we can forgive Willy for distancing himself.  After years of struggling for a company he gave his life to, he goes to his boss Howard (Darrin Hickok, who also does double duty as waiter Stanley) hoping to land a desk job only to discover that the company doesn’t want him anymore.  They just don’t toss him aside like so much garbage, they throw him from a great height with no net to catch him.  He won’t take a job from Charley – probably due to the same sense of pride that forced Biff to take drastic action after he learned about Willy’s affair that led to him not going to college.  These are tragic figures but they look just like us.  Early on, when Linda tells her sons those famous words “Attention must be paid.”, we feel it in our gut – she’s right.  More and more often these days, it feels like we are Willy – stuck in a cycle of work and bills, fighting for a goal we may only attain when it is too late for us to enjoy the success, struggling for some kind of acknowledgment that we indeed accomplished something before we are gone.

Willy follows his brother Ben offstage.  We don’t hear the car crash. The lights cut to black, then come back up on the family, Charley and Bernard at Willy’s grave, the tension between dreams and reality having pulled each character apart.  Merrill delivers a line of dialogue that sums things up quite nicely when Charley says, “No man only needs a little salary.”  The mourners leave Linda alone, per her request.  She tells him that she “made the last payment on the house today.  Today, dear.  And there’ll be nobody home.”  They are free.  And at what cost.

In addition to the cast members detailed above, Sara Young Chandler played the role of Ms. Forsythe (a woman that catches Hap’s eye) and Emily Anna Bell played Letta (friend to Ms. Forsythe) and Jenny (assistant to Charley and Bernard).  The Producers are John Ruskin & Michael R. Myers.  Light & Sound design by Ed Salas.  Both were thoughtfully done, with the sound, in particular, creating a sense of space that merged beautifully with the work on stage.  Scenic design by Stephanie Kerley Schwartz.  Costume Design by Dianne K. Graebner.  Graphic Design by Tucker Reilly.  Nichole Millar is the Stage Manager.  Brad Bentz is the Set Builder.  Wardrobe by Jennifer Sagiao and Zane Stumbrs.  Casting by Paul Ruddy.  Social Media by Austin Highsmith Garces.

Final note:  I saw the show on the 6th – the night of the 7.1 earthquake.  The rolling hit us in the middle of Happy and Biff’s first scene, prompting Biff to pause his story and say, ‘I guess we should wait for the earthquake’.  It felt like it went on forever.  When the rolling stopped, someone from the Box Office or Front of House asked if we wanted to leave or continue.  It sounded like we all said, continue because no one moved.  The actors picked up a beat before they left off and we just locked right back in with them.  Hats off to Robert Adamson and Dylan Rourke.

For more information about tickets or the company:  https://www.ruskingrouptheatre.com/