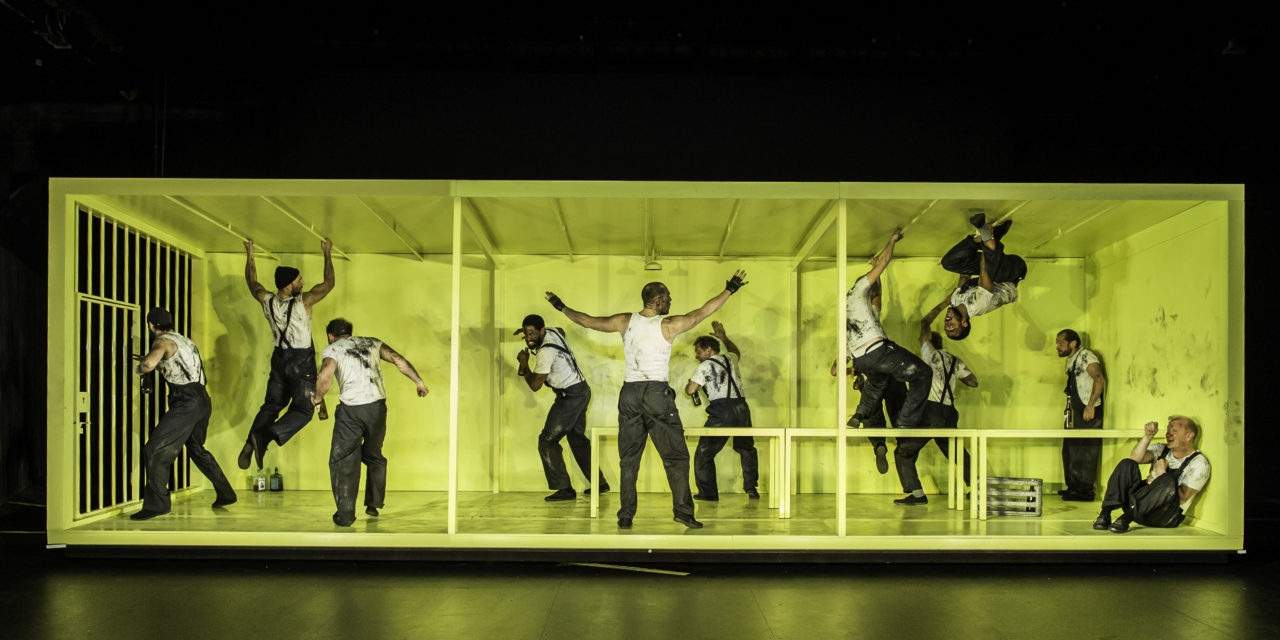 As I sat in my $95 seat applauding the elegant and very smart production of Eugene O’Neill’s The Hairy Ape now playing at the Park Avenue Armory, my emotions pulled in two directions. I was dazzled and thrilled by the principal artists, all of whom—the 15-member ensemble (especially the star Bobby Cannavale), the director Richard Jones, the designer Stewart Laing—deserve major accolades. At the same time, I found myself seriously irritated at the ticket prices ($60-$195 with no student rush or discounts).

There I was, sitting one block from Hunter College, where I’ve taught drama for 25 years, including, quite often, this very play, and none of my students could possibly afford to see it.

Now, high theater ticket prices are hardly news in New York City. Broadway prices are in the same range as the Armory, and sometimes much higher. Hamilton, in particular, has raised eyebrows and hackles in recent years for resale prices of $2,500 per seat and more. And yet that situation has deservedly provoked blowback. Many commentators have pointed out that while Hamilton purports to empower minorities with all its main roles, including the country’s founding fathers, cast with actors of color, few among those historically disempowered groups can actually see the thing. 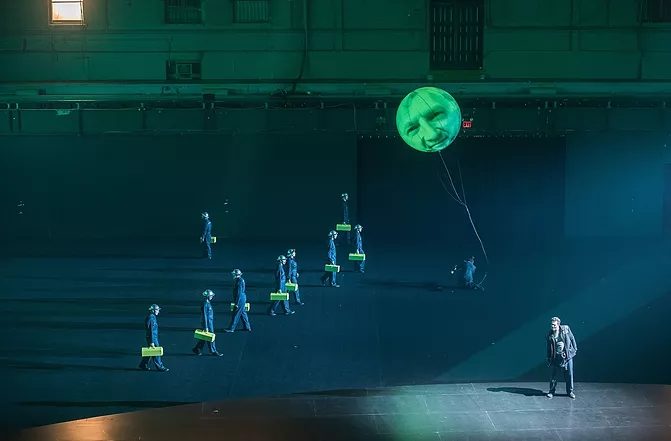 It was touching to read, a year and a half ago, that the Rockefeller Foundation had donated $1.5 million to subsidize Hamilton-matinee tickets for 11th graders from low-income New York City families. As a faculty member at one of New York’s most diverse and prestigious public colleges, however, whose students are if anything MORE financially strapped than high-schoolers yet better prepared than them to appreciate the ideas and innovations in important new theater, I was chagrined that they were left out of the subsidy.

Most Off-Broadway theaters dedicated to serious or classical drama recognize the importance of college student attendance by building discounts for them into their pricing policies. Student tickets are sold in advance for $30 at the Public Theater and $20 at Theatre for a New Audience. On the day of performance, students can buy unsold tickets for $20 at Classic Stage Company and $10 at BAM. The Park Avenue Armory, despite its remarkably ambitious and innovative programming of late, has stuck with what is essentially a Broadway ticket policy. Its clientele is consequently overwhelmingly rich and privileged.

Is this wrong? That’s not the point I want to argue. It is shortsighted and unwise. College students already interested in theater are the most likely ticket buyers of tomorrow. That’s the point the Armory should understand. These students should be cultivated and made to feel welcome in our opulent culture palaces, which often represent a social-class leap for them.

The lack of diversity in the Armory’s audience is especially glaring with a play like The Hairy Ape because it’s one of American drama’s earliest and most cutting indictments of American materialism. This 1922 station-drama tells of the strange seriocomic passion of Yank, a crude, hulking coal-stoker on an ocean-liner whose generic name speaks for itself and whose self-confidence and self-image are shattered when he’s insulted by a slumming heiress. Yank has always found meaning (“belonging,” as he puts it) in his brawn, and the encounter with the heiress forces him to consider other yardsticks of value that he can’t understand. He passes through a series of baffling experiences—trying vainly to pick a fight on Fifth Avenue, trying to explain himself to fellow jailmates, trying to join the IWW—and finally confronts a gorilla in the zoo, calling him “Brother” just before the animal squeezes him to death.

The Hairy Ape certainly requires an outstanding lead performance but it’s not really a star vehicle in the traditional sense. Yank is onstage the whole time and talks a blue streak about being a steely and sovereign man of the present (“aint got no past to tink in, nor nothin’ dat’s comin’, on’y what’s now”). Yet he’s misguided about his real circumstances. We see clearly that he’s caged, exploited, ignored and belittled in every scene by enormous forces beyond his control, and Cannavale captures this sense of haughty anonymity beautifully. He bellows hoarsely at everyone and springs with clenched fists at the slightest provocation, after which he invariably backs down. Cannavale’s distinctive voice and pugnacity make up for his modest physical stature. 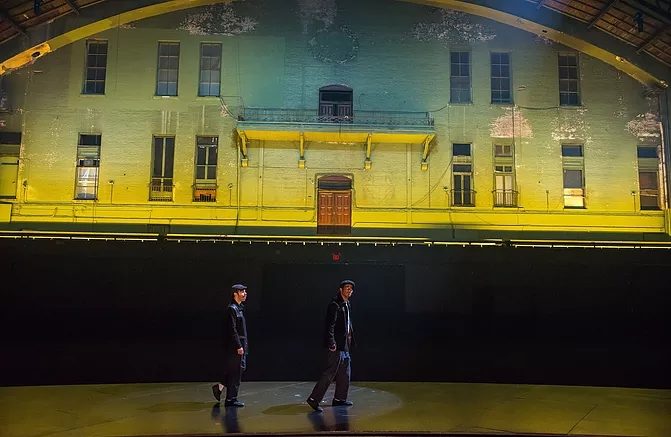 Unlike many other classic modern dramas, O’Neill’s play benefits from the use of powerful stage machinery. This is because the forces crushing Yank are the elements of industrial capitalism, and symbolizing that pressure with industrial stage machinery feels right. It fits the Expressionist style of the work, transferring emotion into objects. The only director other than Richard Jones I’ve seen effectively exploit this quality is the legendary Peter Stein, whose production of the play at the Schaubühne in Berlin I saw in 1986. Stein’s princely state-subsidized budget enabled him and designer Lucio Fanti to make the entire wall of the theater building seem to sway like a rocking ship in the opening scenes—a breathtaking effect.

Jones’s staging is stronger and more elegant than Stein’s. This production began in 2015 at the Old Vic in London, where it was done in proscenium, and now Jones and Laing have reconceived it for the open space of the Armory drill hall.

The audience enters to face towering bleachers of bright yellow plastic seats whose sickening, unnatural color, we soon find out, matches the walls of the cagelike room the stokers occupy in the ship. The sense of alienation this color generates is amplified by a gigantic, black, circular platform that revolves around the bleachers, sweeping different scene units on and off as necessary. The sheer power involved in operating this wheel lends an air of godlike implacability to Yank’s fate.

Beyond that wheel, the audience looks up at a huge expanse of an empty black floor as well as the gorgeously dilapidated rear wall of the drill hall—a poignant, crumbling-brick totem of 19th-century mercantile dreams gone bust. Actors dance, climb, loom, and mill about all these areas throughout the play’s middle scenes, stalked by a wonderfully spooky man-in-the-moon balloon. The cavernous drill hall thus comes to resemble the cultural abyss destined to swallow Yank and all those like him.

Anyone paying close attention to the play, then, really must pause at the end of this production and consider the implications of its exclusive venue. The Hairy Ape is about a downtrodden, subarticulate laborer presented as a typical dying-breed American. To perform it for crowds utterly devoid of anyone like him, and who know and associate with no one like him, is beyond distasteful. It repeats and reinforces the dreadful polarization of our country that is tearing apart our social fabric. 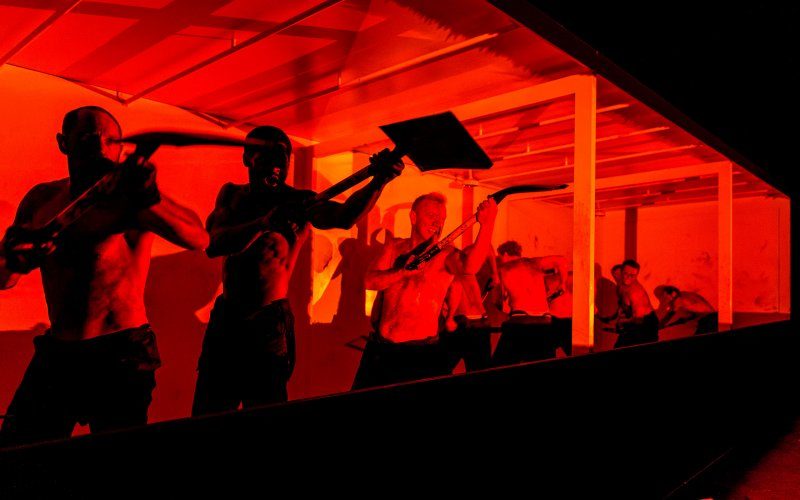 This article was originally posted on JonathanKalb.com. Reposted with permission of the author. To read original article, click here. 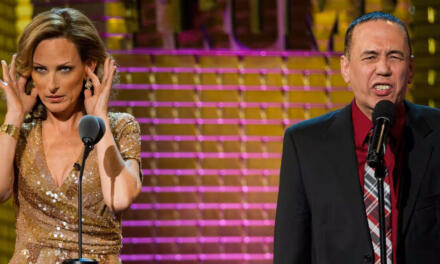