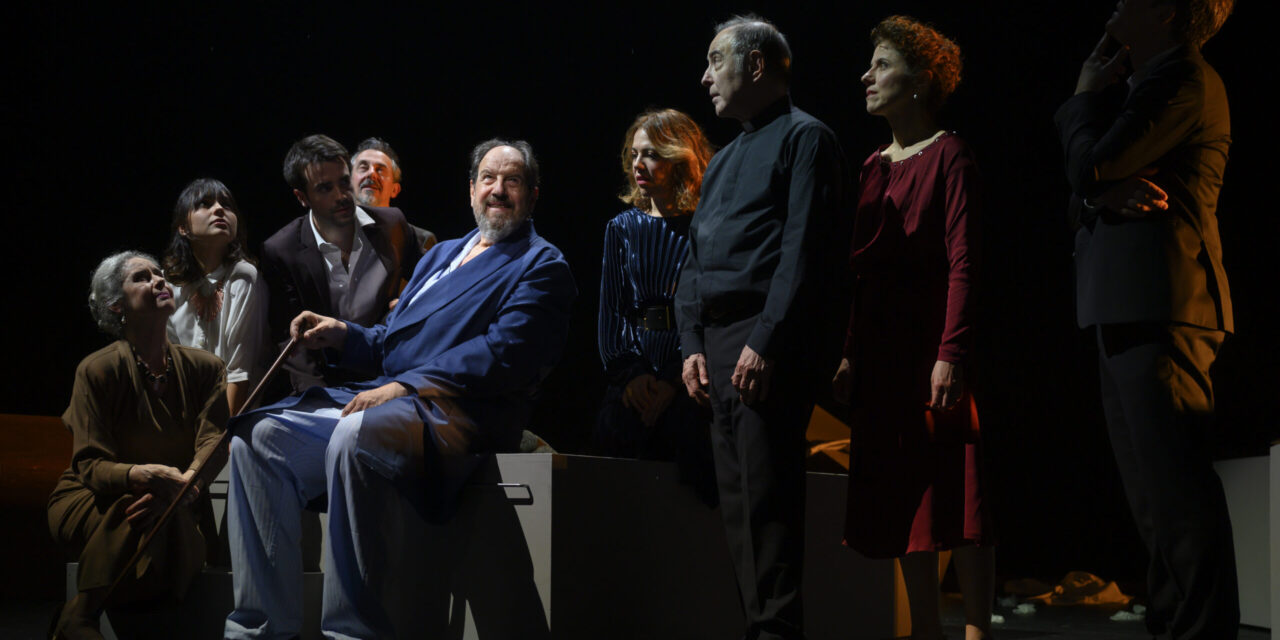 Celebrating the patriarch's birthday: the family at play in Guillem Clua's "Justice". Photo: May Zircus/TNC

Guillem Clua has produced a varied body of work for the Catalan theatre. His plays sometimes have a feelgood quality, as with Smiley (2012), a queer love story for the twenty-first century. They expose enigmas and lies, as with The Swallow (2017), delineate how the political and personal intersect (Skin in Flames, 2005) and verge from the epic (Marburg, 2010) to the intimate (Smiley). Justicia (English title: Justice), premiering at the Catalan National Theatre in February 2020, is his most ambitious work to date, a play about five generations of a Catalan family who converge around the figure of Samuel Gallart—a retired judge, Professor of Law and former politician affiliated to former Catalan President Jordi Pujol’s Convergence and Union centre-right nationalist party. The play is both a state of the nation work—and one of the few that really interrogates the faultlines of the current Catalan situation by looking into its post-Civil War past—and the portrait of a pillar of society who holds a number of devastating secrets.

The play begins with Josep Maria Pou’s Samuel Gallart walking, aided by a stick across an empty stage into a single spotlight. It is as if he is conjuring the play and its characters from his imagination: the other nine actors appear on stage to take on their roles around him, bringing his reading from his memoirs to life. They position him as a mainstay of the Catalan bourgeoisie, with a distinguished record of public service and a notable presence in broadcasting but also a paterfamilias—a husband, father and grandfather. And his family have gathered with an old friend Ricard—now a priest—to celebrate his seventy-fifth birthday. This occasion serves as a mode of looking back at his life—with flashbacks to 1939, 1954, 1965, 1976, 1977, and 1986—a cradle-to-grave tale involving three generations of the Gallart family that moves fluidly between past and present.

Paco Azorín’s set creates these different worlds across a spectacular raised platform that comes down after the opening scene to create the family home where the celebratory birthday dinner for Samuel takes place. The dinner table of Act 1 brings the family together: son Joan (Roger Coma), for whom having a good time remains a fulltime occupation and his pragmatic Venezuelan girlfriend Yolanda (Anna Ycobalzeta); daughter Judit (Anna Sahun) and her ambitious husband Emili (Pere Ponce); and the two grandchildren, siblings Sammy (Alejandro Bordanove) and Júlia (Katrin Vankova), the former wanting to follow in his grandfather’s footsteps, the latter trying to make her family aware of the fact that her sexuality doesn’t fit into their ideas of what she might do with her life. The dinner party scene owes much to O’Neill’s family dramas but its most clear reference point is Tracy Lett’s 2007 play August: Osage County as tensions come into play and the dysfunctional dynamics that shape the family’s conduct are painfully exposed. Actors move out of character to address the audience, providing commentary on the truths (or otherwise) of the family’s claims, as with Joan’s assertions that he met Yolanda—an architect working as a care-worker—on a business trip to Singapore; they actually met on Tindr.

Clua allows the past to break the surface realism of the scene; Samuel encounters his father Artur and his grandmother Raquel as the play slips backwards and forwards in time. Samuel opens the dining room door and the past comes flooding into the room. Exposition comes think and fast as Raquel plots an arranged marriage between Artur and Dolors, the daughter of a prominent right-wing falange officer, to protect the family who in 1939 find themselves grieving loved ones (Artur’s wife, Raquel’s husband) who perished during the Civil War (1936-39). Marriage offers a way back into respectability for a family blighted by their Republican past at a time when the Franco regime was keen to enact a very visible punishment on those who had aligned themselves with the Republican cause. Samuel, Aurora and Ricard in 2020 watch their younger selves in 1965 in Guillem Clua’s Justice. Photo May Zircus/TNC.

As the play progresses, Samuel increasingly seeks refuge in the past as a way of making sense of a present that is clouded by dementia. He faints as his father proposes to the lovesick Dolors, and fearfully witnesses the domestic violence his frustrated father brutally exacts on his vulnerable mother. Josep Maria Pou’s elder Samuel watches the events with a fearful reaction: shocked at his father’s brutality; moved by his mother’s return to remind him of the power of love. Dolors exits the family home like a 1950s Nora in Ibsen’s A Doll’s House, slamming the door behind her in a move that abruptly transports Samuel back to the present.

Clua’s writing intertwines the domestic and the political. Politics is exposed as a discourse that allows for little dissent. Garcés, the political enforcer, spans both Samuel and Sammy’s generations—a further reference to the pervasive reach of a culture of corruption evidenced both in Pujol’s Convergence and Union scandals and the People’s Party’s web of bribes overseen by its treasurer Luis Bárcenas.

Josep Maria Mestres’s production handles both the shifts of time and Samuel’s disintegrating mind with precise choreography. The twenty-year-old Samuel, Ricard and Aurora played by Alejandro Bodanove, Marc Bosch and Katrin Vankova respectively bounce energetically to the sound of The Beatles’ ‘Do you want to know a secret’. Samuel and Ricard’s burgeoning attraction is dissected in conversations that are juxtaposed with those of Julia and Yolanda in the present. Júlia, like Ricard, advocates for a more progressive embracing of same-sex relationships. Samuel and Yolanda don’t want to listen.

Dolors’ return at the end of Act 1 to dispatch advice to her son is short-lived. She is carried up to the heavens in a moment that directly references the end of Millennium Approaches, the first part of Tony Kushner’s Angels in America – a production that opened the Catalan National Theatre with Pou in the role of Roy Cohn in 1996. Act 2 further demonstrates the influence of Kushner’s seminal play on Clua’s writing as Samuel’s secret lover Ignasi wastes away in hospital ravaged by AIDS-related infections and abandoned by Samuel in fear that public revelations about their relationship will harm his political career.

Catholicism’s presence in the play—represented in part by Manel Barceló’s Fr. Ricart— shows the hold its values have had on pujolism, the conservative brand of nationalism the former President promoted during his 23 years in power. It is not difficult to see parallels between the Gallart and Pujol families. Jordi Pujol was Catalonia’s longest-serving president (1980-2003) who oversaw a culture of nepotism and corruption that saw him amass a fortune of 290 million euros overseen by his son Jordi Pujol Ferrusola. Samuel is visited by party enforcer Garcés (Manel Barceló) in 1986, bribing him with knowledge of his relationship with Ignasi into remaining silent about the party’s fiscal fraud and money laundering activities. (Pujol benefitted from bribes from public works contracts and was able to escape responsibility for the consequences of his mismanagement of the Banca Catalana – the bank which his father Florenci had founded in the late 1959 – which went bankrupt in 1984.) In addition, the moves, postures and gait of Vicky Peña’s Aurora uncannily evoke Pujol’s wife Marta Ferrusola, providing a further level of contextual associations. Clua’s play, however, never falls into the terrain of the literal. Aurora’s belief in extra-terrestrials locates her in a world where the imagination can be the tool for escaping a reality beset by duplicity and deceit and Dolors’s ascent to the skies may be as much a playful manifestation of Aurora’s aliens (dismissed by her family) as it is a homage to Kushner’s play.

As Gallart’s memory disintegrates and dementia takes hold, he brings to the fore that which he had hidden away for decades. Enter Ignasi (in a bouncy, dynamic performance from newcomer Marc Bosch). From early clandestine meetings in the gardens of the Font del Gat to a shared life as Gallart’s secret lover, theirs is a relationship defined by a physical energy and dynamism lacking in his family’s moves. Conversations over dance and music point to a willingness to look outside the values and taste that he has sought to uphold before Ignasi’s arrival. Paco Azorín’s set on a slant—the idea of a precipice that Samuel threatens to fall off—sees Pou’s Samuel scrambling across the edges while Bosch’s Ignasi embraces the sense of danger that living life to the full entails at the height of the AIDS crisis as he dances across the stage.

There is an audacity to Clua’s writing. Dealing with the Banca Catalana scandal at a time of patriotic fervour might be perceived as risky but he manages to meld both an epic sense of intersecting histories—personal and political—with broader melodramatic tropes, asides, commentaries and a sinewy sense of storytelling that owes much to Matthew López’s The Inheritance. Indeed, Mestres’s production is marked by the same flowing mise en scène that was such a feature of Stephen Daldry’s staging of López’s play. Imaginative doubling allows for parallels to emerge between characters. Anna Sahun plays both Samuel’s mother Dolors and his daughter Judit – both marked by their relationships with inflexible men; Alejandro Bordanove as both the young Samuel and his grandson Sammy shows how ambition trumps all; Pere Ponce is both Samuel’s tortured father Artur and Judit’s inflexible husband Emili; and Marc Bosch takes on the role of Samuel’s kindly carer Jacob as well as the passionate Ignasi and the young Ricard—the latter two with whom Samuel has a sexual relationship. The cast is uniformly excellent, moving across roles with ease and agility.  Josep Maria Pou moves from striding across the stage as the mighty patriarch to waddling like an uncertain child as he calls out in desperation for Ignasi. It is a performance marked by a King Lear-like disintegration. It is one of his most impressive performances to date. Vicky Peña is brilliant in her curt insistence on protecting the family lies built up over decades. Katrin Vankova imbues the animated Júlia with a forceful energy that disarms Yolanda. Alejandro Bordanove as Sammy, the new poster boy for the party, speaks with the unfiltered arrogance of entitlement and youth.

It’s possible to quibble with moments that might have benefited from some judicial cuts or exposition may seem a little excessive but these are minor grumbles in a piece that impresses across a series of levels. For Clua crafts an ambitious sprawling work that manages to function both as the portrait of a family and a nation, Catalonia, and its discontents from 1939 to the present. The work is never less than engaging with a musical soundtrack that positions each scene within a precise historical moment. At a time when Spain is struggling to come to terms with its chequered past, Justice offers a brave and balanced treatment of the fissures of a society that hasn’t always been able to come to terms with its mistakes realised with a powerful sense of dramatic interplay, impressive theatricality and an ending that recognises the possibilities of that which can never be entirely known or captured in the processes of historicising a complex and difficult past.

Justícia/Justice plays in the Sala Gran of the TNC until 22 March 2020. 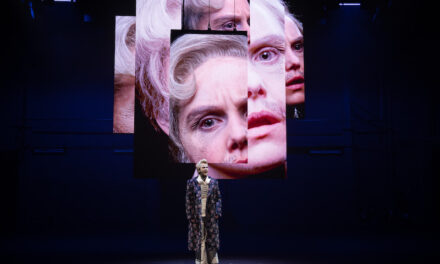 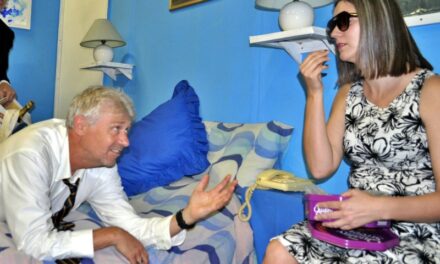