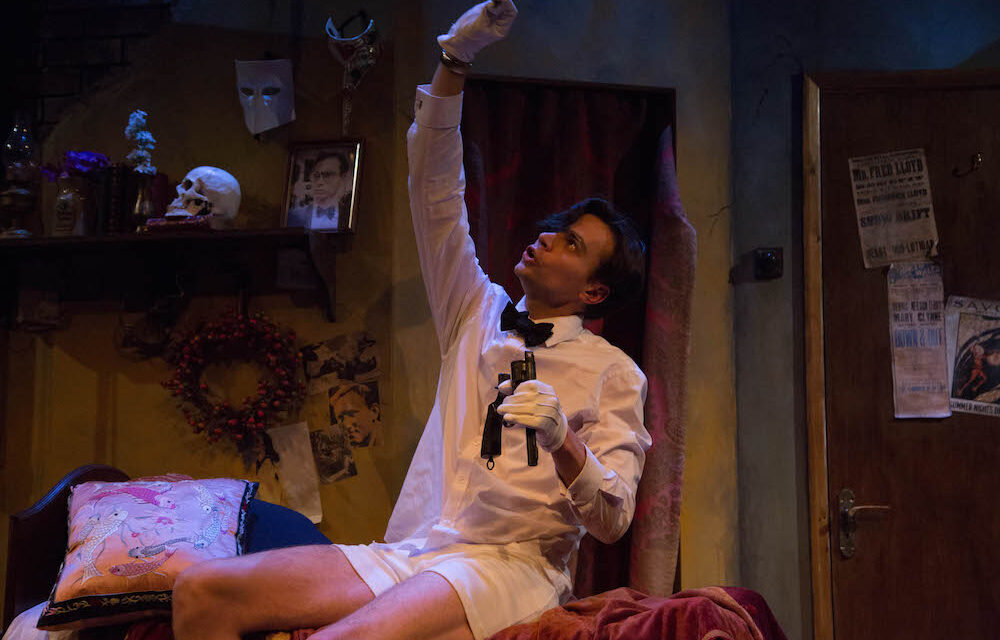 The idea of the perfect murder is a genre standard. The fantasy that you are so intellectually gifted that you could use a supremely clever scheme to bump off an enemy, or make a fortune, is both commonplace and naïve. Yet jails are full of people who have tried to do this. And crime plays thrive on the notion. Gerald Moon’s 1983 comedy-thriller, Corpse!, is a typical example of a style of writing about murder that is entertaining in its plotting, but offers little else of dramatic pleasure. Still, if you are a fan of Tom York, who plays one of Carne brothers in the BBC series Poldark, you might want to catch his stage debut.

In this story about the murderous rivalry between two identical twin brothers, York plays both of them. Set in 1936, the year of the Abdication Crisis caused by Edward VIII’s love for the American divorcée Wallace Simpson, this drama of two siblings offers a study in complete opposites. Evelyn is a very poor (in several senses) actor while his brother Rupert is rich, respectable and revoltingly arrogant. The former lives in a squalid Soho flat and is frequently hassled for rent by Mrs. McGee, his landlady, who is clearly attracted to her younger tenant; the latter is a gent who lives near Regent’s Park and has no money worries at all. He basks in inherited wealth.

The plot begins with Evelyn, avoiding Mrs. McGee’s caresses and her demands for his rent, getting a visit from Major Powell, apparently an Irish military man who has survived the first world war. Evelyn proposes that Powell should murder the hated Rupert so that Evelyn can step into his twin’s shoes and live the lifestyle he is so jealous of. The plan is satisfying elaborate and things begin to go wrong very rapidly; there is also a slight tension in that the camp Evelyn is probably gay while Rupert is engaged to marry very soon. You can imagine that this play if given a production in a large proscenium arch theatre, could be a genuine thriller.

Clive Brill’s production, however, in the Park Theatre’s intimate studio space, feels rather cramped and exposed. In any case, Moon is clearly writing in a style inspired by Joe Orton’s Loot and Anthony Shaffer’s Sleuth, but with neither the originality nor the flair of either. Okay, there are some good lines: when Evelyn admits to shoplifting, he says, “It’s not stealing; it’s socialism.” And his attitude to not working is a classically bohemian one. For culture vultures there are also references to British stereotypes, from the friendly local bobby Hawkins to the atmosphere of postwar Ealing comedies. The farcical unravelling of the murder plan also alludes to classic theatre traditions.

Given that this play was first staged in the early 1980s, its original success must have had something to do with that decade’s attraction to heritage culture. It is set in the past, at a moment when the monarchy was in crisis, and it contains references to numerous aspects of Englishness: Rupert wears a bow tie and looks like a cut-price Noël Coward, while Evelyn indulges himself in countless quotations from Shakespeare. There is more than a whiff of Agatha Christie about the murder plot, while English institutions, from Fortnum and Mason’s to Liberty, from Ascot to anti-American jibes (Simpson is out to “grab, grab, grab”) and first world war clichés, are woven deep into Moon’s playwriting.

The psychology of this comedy, which does (to be fair) elicit some laughs, is all about guilt, revenge and the unmasking of the truth. Gradually, Evelyn grows into the character of a psychopath, evidently enjoying the extremes of cruelty and violence. Likewise, the theme of personal failure is a classic English mindset. But the stereotypes of the sexually rapacious landlady and the drunken Irishman tell us little more about human nature than the sad fact that these are still given space to entertain us. Brill’s production struggles to make the nifty stagecraft—which requires Evelyn and Rupert to occasionally share the same space—work seamlessly, although designer Beth Colley’s revolving set is a quiet joy.

Also, the acting is quite good: York plays the contrasting brothers, floppy Evelyn and upstanding Rupert, very well, and he is ably supported by Paul Kemp’s alarmingly unreliable major and Felicity Duncan’s intrusively friendly landlady, while John Hastings does a convincing turn as policeman Hawkins. With its musical refrain of Cole Porter’s “You Do Something to Me”, this spirited revival of Corpse! does have some watchable, even intriguing, moments, but situating it in a small studio makes for a tight fit, and it really has nothing new to say about either its genre nor about our lives today.

Corpse! is at the Park Theatre until March 28. 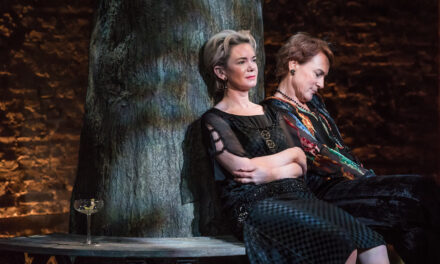 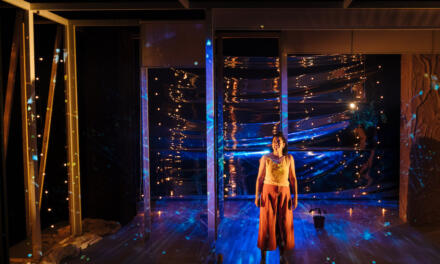