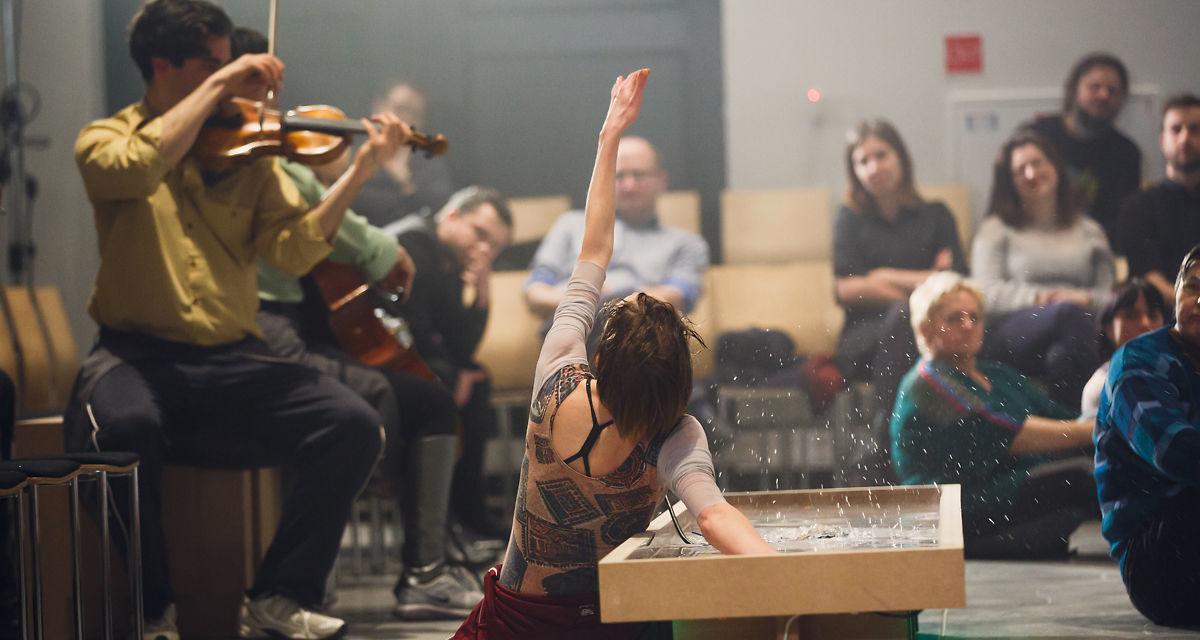 Stage movement has managed to secure its place in Polish theatres. The work of a dancer or a choreographer helps the director and artists find a character’s typical movement, build group scenes or even uncover the rhythm of the entire performance. However, it is quite obvious that the performances by Agnieszka Glińska created together with the dancer Weronika Pleczyńska, or by Piotr Cieplak, who has cooperated with Leszek Bzdyl for years, remain dominated by the word as their main mean of expression. In their performances, the word plays the leading role.

Meanwhile, a change can be seen in the works of directors of the younger generation. The word has been dethroned. It is as important as other means of expression. What does it mean for the entire spectacle? It affects us in a different manner.

The phenomenon is excellently portrayed in the performance Football Players (Piłkarze) staged at the TR Warszawa, directed by Małgorzata Wodnik and with choreography by Marta Ziółek. It is a documentary portrait of two young athletes (Kacper Wdowik, Wiktor Bagiński). They are the only people on the stage but are accompanied by a voice from off-stage (Dobromir Dymecki), which ponders about the characters, suggest questions, sometimes offers answers. Just like a TV sports commentator serves as a guide for the fan’s eyes and thoughts, the narrator in the performance guides the eyes and thoughts of the audience. Due to this fact, the football players do not describe themselves in words, but rather with their bodies, which constitute their main means of expression on the playing field. We see them in a choreographic version of a practice while dancing to popular songs or during a scene of intense effort – while running until they are out of breath. If any words appear during the performance, they are projected on a wall.

The word has also been dethroned by the director Magda Szpecht in her play Schubert. Romantic composition for twelve performers and a string quartet. The play is based on the memoirs and the music of the 19th-century composer Franz Schubert. The cast consists of actors of the Dramatic Theatre in Wałbrzych, as well as a group of amateur performers from the University of the Third Age, and a musical quartet.

The words of Schubert are sometimes uttered, but more often they are projected on the walls of the Old Mine where the play is staged. The entire performance is organized by music (authored by Schubert as well as the contemporary composer Wojtek Blecharz) and stage movement (designed by Paweł Sakowicz), which contains twerking, running, sliding on the ground, as well as partner and solo dancing.

It is worth noting that both the spectacles engage amateur performers. The creators did not wish for them to act and to be restrained by a theatrical corset, but rather to show something of themselves. And the body is a great reserve of honesty. The body can also become their common language, something that will conceal the differences between the amateur and professional actors. In Wodnik’s spectacle, this strategy is also appropriate because of its theme, namely the body of an athlete. We learn about how blocked a body becomes for the sake of the game (for example in the story about what one has to do so that the ball sticks to the foot), and that a homosexual player is worthless on the football market.

In Szpecht’s performance movement and the body express emotions, because the emotions portrayed in the play, namely unfulfilled love, loneliness and the fear generated by lack of money, all accumulate in the body.

This change of proportions between the word and other means of expression is interesting and worth noting. And it seems that it transcends niche experiments of the young–the main prize awarded to Magda Szpecht for the play Schubert in the “Paradiso” competition during the 9th Divine Comedy Festival proves that this manner of stage narration is communicative, attractive and introduces new quality in theatre.

This post originally appeared on East European Performing Arts Platform on April 26, 2017 and has been reposted with permission.