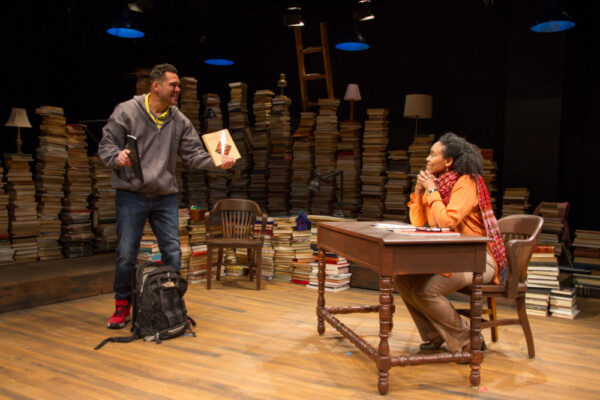 The world has changed significantly not only in the last four months but more largely since the turn of the century. Within the decade, we will have celebrated the centennial of television, 40 years of the internet, and 20 years with Google. Our pace of life is much faster, and the rate at which we consume content has skyrocketed. Theatre has been around much, much longer than any of the aforementioned technologies, but has nevertheless adapted itself to keep pace with the moment. Current and future theatre-artists will have to address (hopefully) very different hurdles because of the fast-paced, changing world.

A theatre man through and through, David Winitsky has dedicated his life to storytelling as his work with the Jewish Plays Project, StorahTelling, and many other theatres proves; and now Winitsky is stepping into the new role of Interim Producing Artistic Director with Ithaca’s Kitchen Theatre. Meeting with Winitsky via Zoom offered some answers and advice in light of a greatly changed world:

Emma Cooper: How long have you been making theatre professionally?

David Winitsky: Well, I guess it’s since ever since I graduated. I finished at Cornell and I went right into theatre as a stage manager. I always say—I am not qualified to do anything else.

Emma Cooper: What is your vision for the upcoming season of Kitchen Theatre?

David Winitsky: Hahaha! That’s an intriguing question. I would say my number one vision is that there will be a season. That’s really great. I feel like I am in an incredibly fortunate position that I’m even given the circumstance.

One of the things that we’ve been kicking around internally—even before I got there—is it’s going to be a big fall in our civic dialogue. We have an election, we have huge, huge question marks about what our world is going to look like as we come out of this crisis, and now we have another crisis on top of that, and what that’s going to mean going forward.

The thing that I feel really strongly about is that we are going to be able to provide theatre to our audiences, and we’re going to stay nimble to be in response to all of those moments. I feel like that’s really critical. I generally feel like theatre is not a quick enough art form, most of the time, to be out in front of an activist movement, it takes a little time. And, really, you need to know what the story is before you can tell it. But I definitely think that theatre is can very much be an allied movement, a reflective movement, and a contemplative movement to an activist moment, where there’s work that we can do that helps us think more broadly and helps us think more deeply about the kind of concrete actions that we’re trying to take.

Ultimately, what my vision is that we will have a season, that season will be in dialogue with the world around us, and that season will continue to be really connected to larger trends that are happening in the field and in the world.

Emma Cooper: How has the pandemic altered or re-invented your approach to theatre-making?

David Winitsky: Well, I think it’s done a lot of things. I said this in my interview with Bevin [Winitsky’s predecessor] for our in-house newsletter that one of the things that is so inspiring about this moment is that creativity is like water: it will find a way out. It’s so fascinating to see how quickly artists pivoted. One of the things that I found so inspiring—it was not just him, but I think he was particularly noticeable in this way—was Brian Stokes Mitchell singing out of his window every night at 8 o’clock. Because it’s 8 o’clock, and he’s a performer, and that’s what you do at 8 o’clock is you sing. It felt very much like that.

It just felt like, ‘We’re not going to be stopped by this.’ And that really is inspiring.

I feel like the thing that I feel really strongly, and I know a lot of my colleagues feel and Marissa and everybody else at the [Kitchen] Theatre does, we want to be in the theatre making theatre. My friend Deb Margolin said, ‘My body misses it.’ And I totally agree with that. So I think that the challenge for us in the next coming months is going to be figuring out how to do that, first and foremost, safely for the performers. How can you have performers on stage safely? And then of course safely for the actors. There’s nothing in me that thinks we’re not going to figure it out. We’re going to figure it out. Because that’s what we do.

Emma Cooper: What are some issues that you think this current generation but more importantly the next generation of theatre-makers have to address?

David Winitsky: The thing that I think is going to shift is that we live in a golden age for narrative storytelling. The kinds of things we’re seeing on the streaming services; the kinds of stories that are being told, the way that they’re being told, the creativity, the ingenuity, they’re amazing.

And there’s great storytelling happening all over, and I look at it and I’m like, ‘You couldn’t do that on stage. And that can’t do what we do on stage.’ I feel like this next generation of storytellers is going to be more in touch with what uniquely happens on stage. Because, frankly, you don’t need the theatre to tell us stories anymore. We have stories everywhere else. You don’t have to get out of your house and go get dressed and go to the theatre and sit in the seat—you don’t have to do that to get a good story. You can get a good story anywhere, anytime, all the time.

So what you need is the thing that we’re craving right now. You need to be in the room with other people, and you need to be on that high wire. One of the fascinating things about theatre is that it can fail. You can be in the theatre and the whole thing screeches to a halt because something goes wrong, and that’s the excitement. It’s real, it’s happening now. And I feel like that’s the place where the theatre is going to focus more because that’s the thing you can’t—no matter how good the story is on Netflix, you can’t get that.

Emma Cooper: What would you say to theatre-makers who are currently discouraged by the lack of space for artistic creators during the pandemic?

David Winitsky: I don’t know how comforting this is, but I think it’s true: we, as artists, are playing the long game. Tony Kushner famously said that he has doubts about the political efficacy of art. Art is not something that moves in the moment. It’s something you ultimately have to have faith in. The impact of art is over time. You make something now, even someone as great as Tony, makes something now and the impact happens over time. Angels was brilliant when it opened, but its impact is because 27 years on from it, it still moves us. It has continued to move us; it has burrowed into our common culture. And great art does that.

So what that means is while you are making art right now, you want to make the thing and then see the change. It’s the place where, I think, where art and science and religion sort of converge. It’s saying, ‘I will do something now, and I will not know if it has the effect.’ I will never know if the work I make has the effect I want it to have, because I will be gone before that effect can happen.

There’s this teaching, ‘You will not complete the work, neither are you free to desist from the work.’ You have to do it, you will not finish it, you are part of a long-term game.

Ultimately, what I think I would tell artists right now is: it’s going to be tough, theatre companies are going to go out of business, jobs will be scarce, audiences will be tough to find. If I was speaking to a group of seniors in theatre, people graduating and going on into the field right now, I would say, be really conscious of that, build your life accordingly.

I remember when I went to graduate school in Chicago, I went in 2001, so it was just as Chicago was really bursting onto the national scene.

What I noticed there was the cost of living was a little bit lower–I was coming from New York—cost of living was a little bit lower, there was a much bigger nonequity scene there, high level nonequity. What I saw were a lot of artists who had built a life that was: you did your theatre in the evening and on the weekend, and you had a day job during the day.

In New York, that would have been considered a failure. But in Chicago, these people had deep, long-term relationships on, ensemble-based relationships in theatre for decades. And they were doing good work. And they had built their lives accordingly in order to be responsive to the reality that they were in.

And I said, ‘Yeah, that’s the way to go.’ You can continue to be an artist if you build your life the way it needs to be built in this moment. So that’s what I would say to a bunch of graduates right now: build your life for the moment and don’t stop making your art. 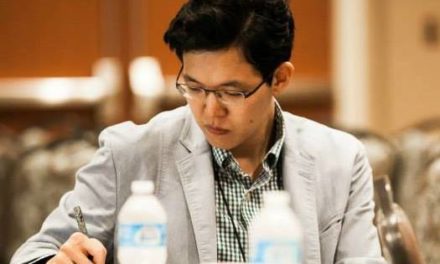