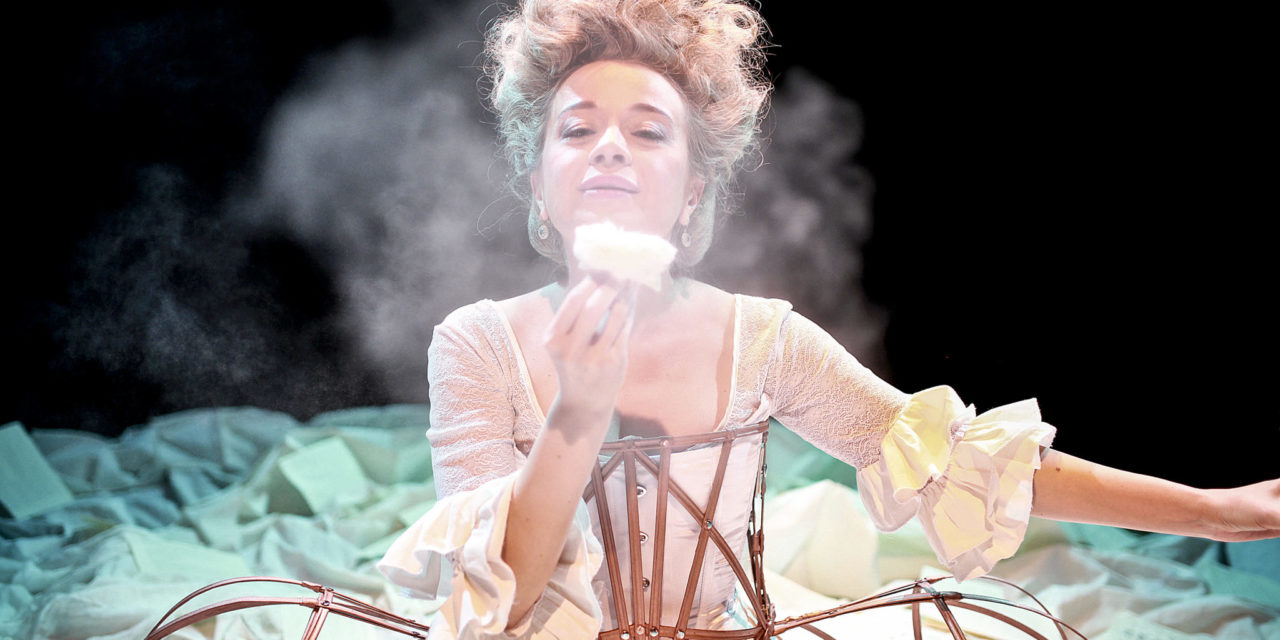 Sylvia Milo in The Other Mozart. Directed by Isaac Byrne. Costume by Magdalena Dabrowska. Press Photo.

A prodigy, a scholar, and an artist determined to break out of a mold, Maria Anna Mozart found her stride in Salzburg.  Among the intelligentsia, she was regarded, but only as the sister of a genius who created Don Giovanni and The Magic Flute.

In searching for the truth behind the woman, Sylvia Milo, actress in The Other Mozart, poured over hundreds of letters to discover Maria Anna Mozart, also known as Nannerl.

“I was visiting Vienna for the 250th birthday celebrations of Wolfgang Amadeus’ life, and I was thrilled to explore the city following in Wolfi’s footsteps, many of which turned out to be Nannerl’s as well,” Milo said.  “At the Mozarthaus Vienna – Wolfgang’s apartment – on the exit wall, as if by an afterthought, there was a little copy of a painting – I saw a woman (with a spectacular hairdo) seated at the harpsichord next to Wolfgang, their hands intertwined, playing together.  Below it read “The Mozart Family portrait.”  I couldn’t believe that I never heard of Wolfgang’s sister.  It actually made me angry that nobody was telling this story. I began my research.”

Produced by Little Matchstick Factory, The Other Mozart includes sights that are as important as sounds – powder flying in the air, hair teased to the sky, and a flowing 16-foot dress, (courtesy of Designer Magdalena Dabrowska).  A more feminine style has never been invented, with bows, curtsies, and all the emotion that one could fit into a corset. 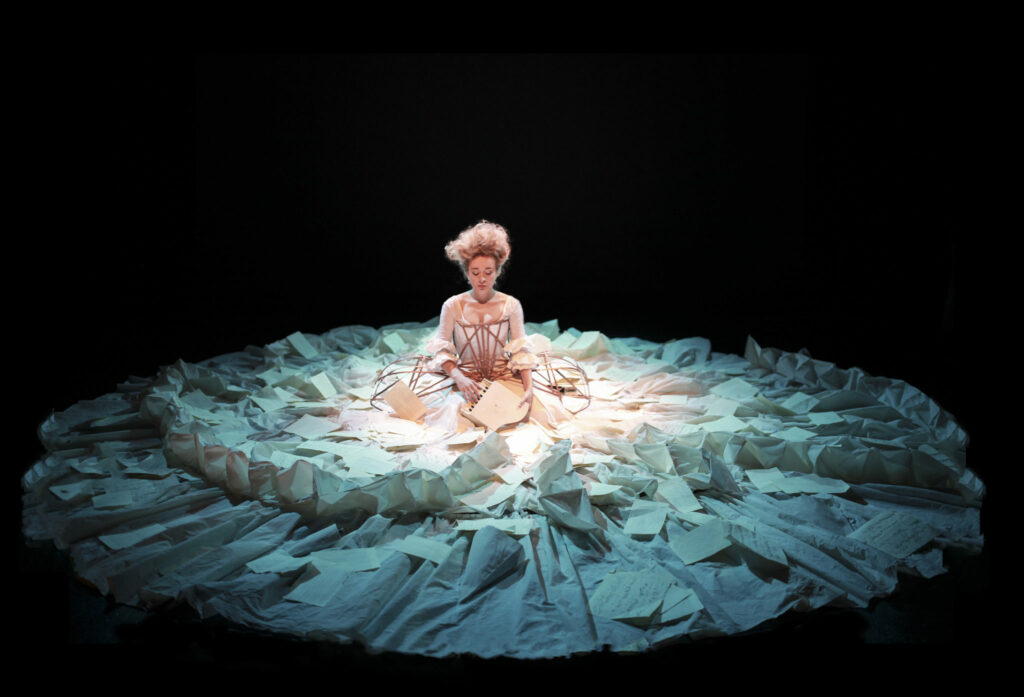 Sylvia Milo in The Other Mozart. Directed by Isaac Byrne. Costume by Magdalena Dabrowska. Press Photo.

How can we understand the complex dynamic of emotion beneath the layers of skirts, fans, and polite conversation?  So much is wrapped up in ornamentation.  A festival favorite since its NYC run at All for One in 2013, The Other Mozart has depth and range.  In studying the published letters, Milo concentrated on the longing of Nannerl, and the sorrow of an artist unrecognized.

Director Isaac Byrne said, “I am a proud feminist, but I’ll never fully understand the struggle that Nannerl or Sylvia or any other woman has gone through.  I can listen.  Help her find her voice.  I’m the most helpful in that I can help her find ways to make the story clear to someone like me who doesn’t intrinsically understand Nannerl’s experience.”

Nathan Davis said, “We thought about her musical imagination and the sounds that would have been in her ears.  So, certainly, clavichord, harpsichord, and fortepiano which she played, but also music boxes which were in fashion at that time, clock chimes, church bells, and also ordinary objects like teacups and fans.”

He continued, “And there’s a beautiful scene in the play, where she plays teacups as if she’s part of the orchestra with her father and his friends.  This is not something that was written about in the letters.  This part of the play is also imagination.  We wanted to portray what an active, fertile imagination would do before she had the skills to play the piano.”

The sounds of the play are crisp and lively.  Composition is by Phyllis Chen and Nathan Davis, who were featured composers at the Mostly Mozart Festival at Lincoln Center.  As Wolfgang’s world has exponential growth, Nannerl’s world is increasingly quiet.  “Pretty early in the rehearsal process, I think we discovered that it wasn’t impossible to create the kind of silence that needs to be created for this tremendous loss, without creating more sound,” said Davis.

Milo explains what was like for Maria Anna to be a wife and mother, who plays piano for three hours a day, and raises children.  The noble duty – out of the eye of the elite -is a painful effort for a prodigy and a genius.  Milo said, “She concentrated on preserving his legacy, but never gave up her art.”

Finding the music, the beauty, and the despair of Mozart were part of the actor’s journey.  For this one-woman show, Milo coordinated Lee Strasberg Stella Adler, Michael Chekhov, and Grotowski training with period style movement from Janice Orlandi, before leaping ahead.  “Thankfully, as I have played the piano from the age of 4, the musician was already in my body,” said Milo.

The Mozarteum Foundation in Salzburg and Mozarteum University in Salzburg invited Sylvia Milo and her team to present the work in 2014, at the Wohnhaus – inside the Mozart family’s apartment.  The Drama Desk Award Winning work will also be presented again this Fall, and Nannerl will be played in rotation by Sylvia Milo, Samantha Hoefer, Daniela Galli, and Jody Christopherson.  It is currently scheduled at The Players Theatre until November 13.

In speaking about operatic potential of theater in downtown NYC, the director of The Other Mozart, Isaac Byrne said, “We need that primordial soup where risks can be taken and new ideas can percolate and grow.  Otherwise theater will stagnate and lose its verve.  Thank god for somewhere like The Players Theatre where a show like The Other Mozart can live on and continue to grow.“

He continued, “It’s been so wonderful to have a show that’s found a home.  The Players Theatre has been a great place to work at.  It’s been very successful for them and for us.  It’s a very supportive and symbiotic relationship….I love downtown theater so much it’s hard to go see almost anything else.  I just saw a couple of Broadway shows that were good but had issues…I mean you sit there looking at all those resources and that money onstage, you think “where’s the courage?!  Where’s the fire?  Where’s the passion for making every detail perfect?”

While the show is playing in NYC, Sylvia Milo will perform at the Mozarthaus Vienna – inside Wolfgang’s apartment, where she says she first “discovered Nannerl.”

“Nannerl never got to see this apartment, she was already stranded in a small village, taking care of her five step-children, playing on a broken harpsichord, for no one.  She would have loved to have been here.  Now we will bring her here, and bring her story to a new audience.  It is a dream to perform in that house,” explained Sylvia.

She said, “Every time I perform in a place where she lived or played music, it absolutely deepens my understanding and enriches the play.” 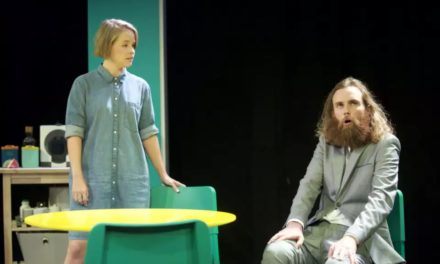