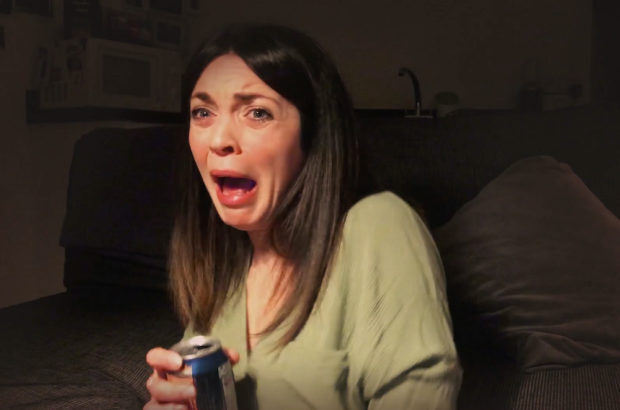 She’s an ordinary young woman, and she really doesn’t know what to think. After all, things are way out of control. Out of order. She knows that the natural world is pretty fucked and that nothing grows in the earth anymore — well, at least not on her patch. She knows that the gators, the semi-aquatic reptiles that used to live in swamps, have now taken to strolling through cities. And that they fall in love with humans, and serenade them, and feel bad when they are rejected. She also knows that there are codes of behavior — ways of doing things in everyday life that are right, and those that are wrong. So what happens when these codes are broken?

Philip Ridley’s masterly monologue, the first in an epic series being streamed by Tramp Productions on its YouTube channel, explores the anxieties of our current culture of fear by boldly inventing the metaphor of ever-present alligators. In this short story, which is barely 20 minutes long, the nameless female speaker describes a world in which gators live side-by-side with humans, fall in love with them, and then finally scuttle off when the correct rejection procedure is followed. She also shows what happens when the codes that govern daily life are broken, and the devastating consequences of not obeying the rules. Sounds familiar, eh?

Rachel Bright, who played Poppy Meadow in EastEnders, adds down-to-earth credibility to this allegorical tale, with an openness and frankness that adds charm to the terror of the words. Wiebke Green directs neatly, with assistance from the director of photography Jack Silver, making this a perfect piece for streaming on your laptop or phone. Bright talks straight to us, as if on Skype or Zoom, and her affability and closeness lends an intimacy to this story that is partly gothic, part science fiction. At moments, you really feel that she is bearing witness, in between her swigs of lager, to events that sound really outlandish in the cold light of reason, but which in her matter-of-fact performance seem curiously convincing.

From the start, when she tells us that she has lent her Uzi to Taron, a young man that needs to scare off a nine-foot gator who has “gone sweet on him”, the narrative is a glorious mixture of the funny and the fearful. The details that accumulate, like sediment on the floor of the nearby swamps, gradually create an atmosphere that is both surreal and realistic. At his best, Ridley parodies the typical attitudes of ordinary people to any catastrophe: some spread rumors, others claim they know better, others exaggerate or scoff, yet others develop and disseminate conspiracy theories. Some look back nostalgically; some gaze on in horror. This is recognizably familiar and grounds the bizarre in the fertile soil of the mundane.

After all, if the events of recent weeks have taught us anything it is surely that our everyday lives are fragile and vulnerable to disruption, to totally unexpected twists of fate. In Gators, this comes across strongly, but so does the resilience of the narrator: at different times, she is a survivalist, an exponent of the #MeToo movement, and a person determined to try a different solution to an emergency. She is a good neighbor and a ballsy youngster. The flexibility of Ridley’s metaphor is impressive: the situation that he sketches out is definitely about our world, and although coronavirus is never mentioned, clearly it is there in the background. And, for the time being, humanity’s main defenses are our inventiveness and our resilience.

The origins of this monologue exemplify the same qualities. Before London theatres were shut down on March 16, the Southwark Playhouse was due to premiere Ridley’s latest play, The Beast of Blue Yonder, scheduled to open on April 2. When this was impossible, the company came up with an idea they call The Beast Will Rise, in which each cast member of the play performs one new monologue each week. They promised people a world premiere in April, and they have delivered one. So the playwright, having written Gators, says that 13 other monologues will follow, each streamed weekly for free, although donations are welcome. If the first one is anything to go by, they will be a marvelous contribution to Ridley’s imaginative celebration of the glittering dark.

This article was originally posted sierz.co.uk on April 8, 2020, and has been reposted with permission. To read the original article, click here.