Albert Camus’ 1948 play The State of Siege (L’État de Siège) is presently touring the U.S. in a production by Paris’ celebrated Théâtre de la Ville. This is the company’s third visit to this country, but its first to Boston where it opened on November 9 at ArtEmerson’s Majestic Theatre.

Camus was invited to write the play by the actor and mime Jean-Louis Barrault then also France’s leading director. As early as the late 1930s, Barrault began developing ideas for a drama based on the plague. At first, he collaborated with Antonin Artaud whose interest lay not in dialogue, but in creating a powerful theatre of ritual, imagery, and movement which ultimately through assaulting the audience’s senses would have a cathartic effect. The two men split up because Artaud’s ideas were too extreme for Barrault and the converse was true for Artaud.

When in 1947, the philosopher, journalist, playwright, and novelist Camus published The Plague Barrault contacted him in the hope that Camus would adapt Daniel Defoe’s A Journal of the Plague Year. Camus preferred to write an original play and chose to set it in Spain, then under the rule of Dictator Francisco Franco. According to the author, he and Barrault worked closely on what they viewed as an untraditional theatre piece of many styles that made use of poetic monologues, wordless scenes, a chorus, simple dialogue, and farce.

At its opening in 1948, the play flopped and closed after a brief run of twenty-three performances. Critics accused Camus of appropriating his novel The Plague as the basis of The State of Siege, although the two works, apart from utilizing a plague as the motif, are dissimilar. Sixty-eight years passed before it received another important Paris production. The 2016 French presidential elections and the fear they engendered lay behind director Emmanuel Demarcy-Mota’s decision to revive it.

The production, in French with supertitles, begins with actors greeting the spectators with a friendly bonjour. A few step off the stage to dance with members of the audience as spirited music plays. Suddenly the house lights go down, a comet streaks across the sky and sirens are heard, an omen of horrors to come.

The Plague (Serge Maggiani) in human form, dressed as a bureaucrat in an overcoat and his attractive Secretary (Valérie Dashwood) who represents death, rid the town of all of its civil servants except one to create a new order that destroys freedom and pleasure in any form. They are abetted in their plan by the nihilist town drunk Nada (Philippe Demarle). Punishment is often meted out as the plague, in the shape of a black star. Diego (Matthieu Dessertine), a seemingly ordinary young man in love with Victoria (Hannah Levin Seiderman) is alone at first in resisting the oppressive regime. Victoria and Diego continue to make passionate love for which they pay dearly. The townspeople are eventually convinced by Diego’s action that what stands between them and liberty is their own fear. The Plague and his Secretary leave with the warning that they will return.

This allegorical play seems dated; the characters are written as symbols; the dialogue is sometimes stiff. The character of the Plague is confusing particularly in his last scene where he explains himself. Questions come to mind. Why is the secretary, the representative of death, written and played as sexually enticing as she wanders through the play in her varied wardrobe? What is the significance of her sitting in a wheelchair on the balcony during one scene?

The setting is simple but effective. The large stage is raked; upstage there is a balcony where certain characters watch what is going on in the town, accenting the theme of spying and supervision. Three screens are used for projections. Furniture consists mostly of tables and chairs. The floor is covered with a tarp used in various ways. Constantly changing lighting adds to the work’s interest. Costumes are contemporary except for the frightening medieval death masks worn by those who bury the deceased.

This post originally appeared in Capital Critics’ Circle on November 12, 2017, and has been reposted with permission. 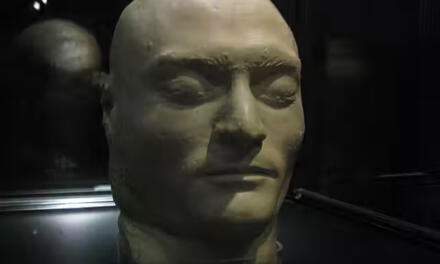