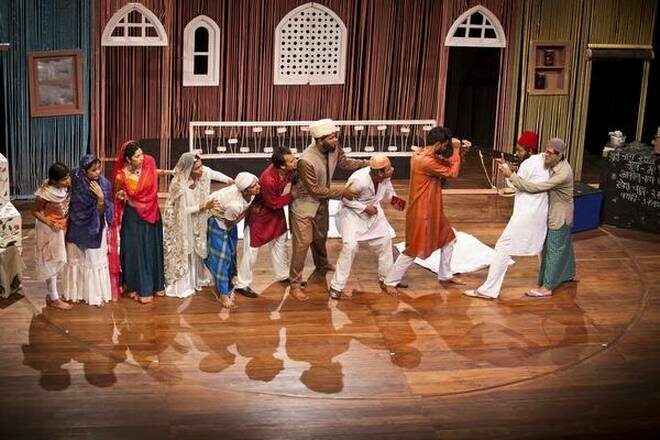 Still going strong at more than 80 shows in roughly ten years is Rangbaaz’s Bade Miyan Deewane, an Urdu farce helmed by actor and director Imraan Rasheed, which is based on a 1936 novel Budbhas by Pakistani writer Shaukat Thanvi, who was born in Uttar Pradesh, and eventually shifted to Lahore. Rasheed acquainted himself with Thanvi’s quick-witted pen during the making of an anthology of short plays titled Namak Mirch (a 2008 collaboration between Rangbaaz and Akvarious Productions), which included four of Thanvi’s stories.

“The milieu in which his tales unfold feels like home to me, whether it is the language or the customs,” elaborates Rasheed.

Thanvi’s novel is purportedly set in the northern town of Rampur but is equally reminiscent of other urban centers like Bulandshahr or Moradabad with thriving Muslim neighborhoods. It is a situational comedy in which the principal character is Meer Saheb, an octogenarian seeking the hand of a winsome young woman called Suraiyya while being set up to fail in spectacular fashion. It had all the ingredients of being a laugh riot, and Rasheed and his collaborators at Rangbaaz, including co-founder Pawan Uttam and Farrukh Seyer (both irrepressible actors themselves), adapted it for the stage bringing in new parts like Meer’s man-servant, Chilla, made memorable by Seyer himself. Uttam started out by playing the young Tabish, Suraiyya’s lover of choice and Meer’s son, before moving on to essay the play’s de facto narrator and instigator-in-chief Shaukat (an obvious stand-in for Thanvi); while Akarsh Khurana took on the part of Suraiyya’s father, even as Rasheed himself settled into what has become his signature turn, that of the doddering Meer. “This is a character who wants to stay young till his last breath, which is vital to life according to me,” explains the actor.

Because of its longevity, and the fact that actors keep impossibly busy diaries in Mumbai, the cast of Bade Miyan Deewane has undergone many changes and upheavals over the roughly ten-year period the play has been in vogue (since opening in March 2010). Sometimes last-minute combinations lend themselves to great on-stage chemistry, as actors ad-lib with flair and seem to be living through the play’s improbably comic situations as they happen. Perhaps, on the commercial stage, the absence of such subtleties could have relegated the play into becoming just another run-of-the-mill farce. But on a performing turf that features experienced actors of the experimental stage, the play acquires a dynamism that draws in audiences, both charmed and disarmed by actors who appear to be enjoying themselves as much, if not more. Of course, the synergy exhibited by early ensembles has waned over time.

Although Rasheed’s hyperventilating avatar is not without its tics, it’s a performance that hits the right comedic notes, which is why this is a play that arguably hasn’t succumbed to the temptation of going all-out, over-the-top. Its mobile-free ethos sets it in an uncertain past, and although the topical wisecracks the actors incorporate in each show might seem anachronistic to such a setting, it is somehow strangely fitting. It features an old-fashioned romance — Tabish and Suraiyya parley across adjoining terraces, their love illuminated by the moon. Although it isn’t judgmental of Meer’s predilections, it also doesn’t sanctify his patriarchal entitlement. Gender considerations sit somewhat uneasily in this universe, as the women — Suraiyya and her mother, Meer’s bevy of courtesans — run the gamut from coquette to virago. For this reason, the proceedings feel a little dated at times, as do the artless sets. In their subsequent plays like Falsafa, Phir Se Shaadi, and Baawla, Rangbaaz has delivered more memorable female characters. If we were to just look at their performances, the women of Bade Miyan Deewane, which has included the likes of Abir Abrar, Tahira Nath, Shivani Tanksale, or Nishi Doshi, have always acquitted themselves well.

There are many memories associated with the play that are particularly dear to Rasheed. For instance, the non-speaking cameos played by visiting actors that become inside jokes: “This is the role that has kept the fires burning for Rangbaaz; it is a play that is my retirement fund and I will never stop staging it,” the actor emphasizes, only half-jokingly. An important contributor to the play’s appeal is its unostentatious music, which includes the stand-out ditty, “Ishq Ishq Ishq,” sung live on stage with minimal accompaniment. It’s a jaunty number that captures well the play’s romantic soul.

This article was originally published on https://www.thehindu.com/ on July 11, 2019. Reposted with permission. Read the original article.