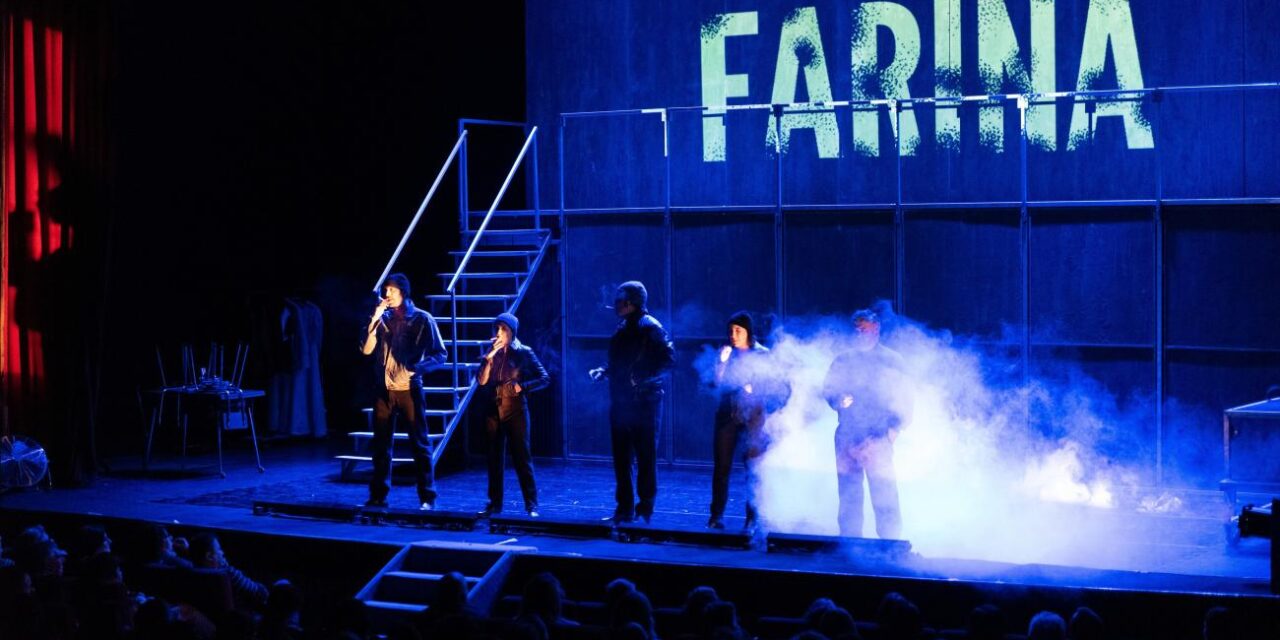 Madrid is the European capital worst hit by COVID-19. There nevertheless remains more theatrical activity than in most other cities. The 2015 book by investigative journalist Nacho Carretero has already spawned a sensationally successful TV series, streamed internationally by Netflix as Cocaine Coast (Fariña translates as flour, a popular Spanish euphemism for blow) as well as a graphic novel. A theatrical adaptation premiered in Galicia a year ago. On 17 September 2020, a Madrid PA system played music from Galician rock banks as the sold-out audience filed into the Matadero theatre with trepidation and anticipation for opening night in the Spanish capital.

The production commenced iconoclastically, evoking parallels between President Eisenhower’s commandment to film the Nazi Concentration Camps, lest the horror be forgotten, and Galicia of the 1980s. Insensitive as the comparison may be, the casualties of Spain’s drugs epidemic have too often been side-stepped in triumphalist narratives of Spain’s European integration and Transition to democracy following General Francisco Franco’s death in 1975.

Barcelona hosting the 1992 Olympics Games was in no small part an attempt to regenerate an old town populated by criminals, drug addicts and a frightened ageing population. Family histories in Galicia are marred by the memory of a lost generation, many of whom died of overdoses or committed suicide. As seen on television, Fariña—legible for an international audience hooked on Narcos (2015-17) and the continued celebrity stock of Pablo Escobar or El Chapo—depicted the rise of Sito Miñanco as Spain’s foremost cocaine smuggler. Adapted for the stage by Carretero in collaboration with Galician dramaturge José L. Prieto, the production directed by Tito Asorey (best known for his work in classical theatre) features five actors—Cristina Iglesias, Marcos Perreiro, María Vázquez, Sergio Zearreta and Xosé A. Touriñán—in an array of roles to recount the tale of modern-day smuggling in a largely conservative region of Spain with over 1,500 kilometers of coastline (more than the tourist-friendly Andalusia as the audience was informed at the beginning and end as part of a circular narrative), with a particular emphasis on the crucial decades of the 1970s and 1980s.

As part of the publically-funded Teatro Español, the performance spaces at the Matadero (Madrid’s former slaughterhouse) have impressive installations, well-equipped for multi-media displays that practitioners have often struggled to optimize for maximum effect. This was not the case here. A large screen of the size and definition typical of arena concerts was more than just scenic decoration, employed alongside live music—curated and scored by the Novedades Carmiña band—as a form of immersive theatre. Synaesthetic narrative devices complemented but never dwarfed the human performers, who arrived on stage first as a chorus to explain how and why smuggling was a vital aspect of everyday life in Franco’s native Galicia during the difficult years after the Spanish Civil War. By the end of the dictatorship, smugglers had replaced basic food supplies and penicillin with tobacco. A scene of a Guardia Civil—Spain’s rural police or Civil Guard—receiving a bribe, and passing some notes to his adolescent daughter for a night out, was shorthand for how normalized this had become. The earliest concrete historical recreation was of the 1979 patron saint celebrations, held the same year as the first post-Franco municipal elections. A cheesy covers band, of the kind found in fiestas throughout Spain, performed a karaoke- and beach-favorite, the 1970 hit, “Puerto de Vigo” [Vigo Port]. Neither the on- or off-stage audience required much encouragement to clap along. Musicians and the town mayor were shown paying homage to a smuggler, a benevolent cacique (local chief) whose largesse funded festivities, political campaigns and treatment for infirm children excluded from the nascent public health system.

In a manner akin to Calixto Bieito’s 2012 updating of Bizet’s Carmen for English National Opera—which interrogated the violence underpinning the touristic marketing of exuberant late-Francoist Spain—Fariña associated the festive with the feudal, the logical outcome when a corrupt and corrupting state relinquishes responsibility. Amongst the poorest and least-educated regions of Spain, Galicia was particularly exposed to the burgeoning drug markets that coincided with the Transition to democracy. Whilst King Juan Carlos has long been treated with kid gloves in Spain, recent financial scandals mean that he is increasingly viewed as a corrupt cacique (dis)graced by a veneer of monarchical poise and democratic respectability. A month after he left Spain to take refuge in the United Arab Emirates to avoid further tarnishing the Royal Household, the Madrid audience responded with garrulous laughter to a caricature of Juan Carlos—similar to those of the Habsburg monarchs in many contemporary productions of Early Modern plays—enumerating changes in the democratic penal code. These ensured that, by the time of Spain’s integration into the European Economic Community in 1986, the penalties for smuggling tobacco and cocaine were similar.

With a running time of two hours with no interval, a calibrated control of pathos and humor were central to retaining attention. Just as a scene in which a Moroccan character embodied hashish and a Colombian female dancer cocaine began to overstay its welcome, there was an abrupt change in tone. A teenage girl under the influence of heroin returned to the parental home. Home videos of the addict ten years earlier as an angelic child playing in a park broadcast on the screen forced the audience to share her mother and father’s pain and puzzlement about what could have gone wrong. Spectators barely had the chance to register this situation before the screen switched to an image of a healthy-looking male football team. An in-the-flesh leather jacketed survivor appeared on stage to tell us their team name has been the punkish “Dejános vivir” [Let us Live], but that all but three of its members had been driven to an early grave. By 1992, Spain had the highest AIDS rates in Europe: almost two- thirds of the country’s sufferers were heroin addicts, and more than forty percent of heroin users were reckoned to be HIV positive. On television, Fariña focused almost exclusively on cocaine but the theatrical adaptation, as per Carretero’s book, also honed in on heroin.

Archival footage was displayed on the big screen of local mothers (a number of whom were spotted amongst the audience in the initial Galician run), protesting against the drug lords and the inaction of local politicians and law-makers. These matriarchal activists found an ally in the emerging young Judge Baltasar Garzón, who became a celebrity across Spain in his fight against drugs before gaining international fame in his attempts to bring General Pinochet and surviving Francoists to account for human rights abuses. As it neared the end, Fariña showcased a bass-driven funk/rock interlude—of the kind often used in rock concerts to introduce individual members—in which Garzón’s name was called out as the judge debated names for the first concerted operation to bring the cartels to justice. Various possibilities were entertained; the suitably maritime “Nécora” (velvet crab) was settled upon.

The climax of the song and production came with a call and response to the audience for Sito Miñanco, who became a fugitive in 1990 before being caught in 1994. This marked the end of an era, but the events depicted do not belong solely to the past. Carretero’s book might never have become a bestseller were it not for the publicity of a local mayor, accused of fraternizing with drug lords, taking legal action for slander and attaining a court order, subsequently overturned, banning publication. The final scene of the production featured a veteran smuggler from the 1980s berated by his present-day counterparts for being too ostentatious about his money and power. Drugs continue to be a rich source of money of wealth and influence but are no longer so obviously on display. An energetic curtain call was rewarded with an enthusiastic standing ovation, audience members joining in song in a manner hardly conducive to social distancing. Bagpipes and Celtic dancing provided a cathartic exorcism. To a far greater extent than in the rest of the production, the lines between the celebration and critique of folkloric display as an archaic feudal glue had been blurred.

Whist Galicia caníbal (named thus for a 1986 song by Vigo band Os Resentidos) was a huge success at the regional level, the musical struggled to find an audience when it premiered in the landlocked capital of Spain in 2012. On television, Fariña broke with the tradition of Madrid accents being employed irrespective of the geographical origins of actors or characters. On-stage it was refreshing to see the five Galician cast members speaking in naturalistic fashion without recourse to exaggeration for comic effect. Amongst the opening night audience, Galicians were disproportionally well-represented, but accents from around the Peninsula could be heard talking excitedly at the end about had been witnessed as well as the frisson or returning to live theatre. Tickets for the admittedly reduced-capacity Madrid run are largely sold-out. That the new normal may involve embracing Spain’s pluralistic regional identities and refusing to hide from the ghosts of the pharmaceutical past, when few families were left unscathed by a deadly drugs pandemic, provide a glimmer of hope in these trying times.