Given that the publicity synopsis to Dries Verhoeven’s video installation pretty much tells all, I’m surprised by how excited I am by the time I’m finally summoned to enter the heavy white door.

A lot of the theatricality in my experience of Guilty Landscapes III is in the anticipation of this show. I do a double take when I see that SIFA is programming a work for one audience member at a time. I can’t not be aware of the rarity and significance of this encounter in Singapore where arts funding is strongly driven by numbers. I reserve my ticket for a specific time slot on a given date and I am asked to arrive 30 minutes early. I wander into the waiting area in front of the installation but am shooed away firmly by an usher. “I don’t think you should be here.” So I wait patiently. An hour later, I watch the two audience members before me exit the room expressionlessly. I can hear a sort of roaring through the walls of the installation space.

Because I know that this will be an encounter in a white cube transformed into a scene of “uncomfortable responsibility,” I am not surprised that upon entering, the far end of the darkened room turns out to be a grainy projection of a ruined street in Homs, Syria. The roaring is the rush of air through stories of windows, gaping into the sky from twisted remnants of charred apartment blocks. It’s a scene of familiar guilt that I have consumed with the millions all over the world, wishing that there was something that we could actually do about this.

A lone figure enters the street and picks his way across the rubble towards a fallen chair in the center of the frame. There is a chair mirroring it in the gallery space on my side. He looks directly at me, smiles and gestures me to sit with him, closer. He is an attractive young man, incongruously relaxed in a clean yellow shirt. He begins to sing in Arabic. The encounter feels so real and I begin to struggle. As a video artist myself, I sit there thinking that there can’t possibly be this good a streaming connection in a destroyed country. This can’t possibly be safe, to have someone perform repeatedly in the open. There’s something that doesn’t fit. But here he is. We look into each other’s eyes for minutes and I allow myself to be transported into a beautiful moment of co-existence. I don’t do much more than that because I am terrified that his reality will dissipate if I propose something that a recorded video cannot respond to. He leaves politely but I keep sitting, hoping that there will be more to experience. Instead, the projection cuts off and I am left reading an information plate in the corner of the space that indicates “Two cameras. Internet connection.” among the materials of the piece. I feel stupid and disoriented and disappointed.

Other friends recount more immediate interactions. Handshakes, waving, an attempted embrace. Exhilaration, alienation, or a fuzzy feeling of having accomplished something very important in the world.

In the program note, Verhoeven’s bio includes a snarky line about him being “not concerned with conveying a statement about reality, but mainly about unbalancing the visitor in order to evoke a shared vulnerability between the viewer and the viewed work.” Guilty Landscapes is one of Verhoeven’s many works that use performance/installation to problematize the barriers (privilege, economics, racism, etc.) that we erect between ourselves and others. Does it matter if the encounter was real? A friend whispers to me afterward that the work was done with a green screen and an actor in Amsterdam. I can’t confirm this, but out of jealous cruelty, I repeat this to the friend who was so in love with the experience that he embraced the performer virtually. I tell him this so that I can watch his exhilaration melt. 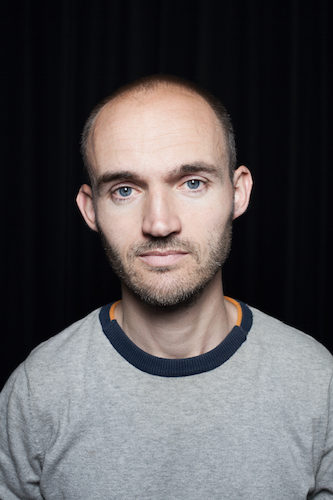 This work certainly churned up my boundaries of desire and frustration. It bloodied the itch of my guilt. I like that I feel provoked to wrestle with some big questions. Theoretically, I think it shouldn’t matter whether the encounter is “real.” We should give it the leeway of theatre. The thing is, this work isn’t framed as theatre. It is framed to cultivate a sense of reality and an authentic response. Setting the audience up in this way raises ethical questions about representation and human trust that are as important as the ethical questions of journalism that Verhoeven ostensibly aims at.

Then the breezy appropriation? Morbid fascination with of the suffering of faraway little people is such an easy trigger button. Verhoeven is very clever to put his finger on a button that a lot of us seem to want to be pushed. The other installments in this series include a slum resident in Port au Prince, a sweatshop worker in Hangzhou, and a stripper in Pattaya. I understand why it had to be Syria for Singapore. It has to be far away, not near and real. Colonisation! It lives! I contemplate the grossness of the inverse scenario, maybe Rohingya refugees being invited to the relief of ten minutes online with a “real” person in a luxurious shopping mall, before they continue fleeing for their lives.

The guilt is still nagging at my thoughts 48 hours after the show. I guess I’ll have to go out there and change something in the real world. Maybe some activism for refugees?

This article was originally published in Arts Equator on September 15, 2017, and has been reposted with permission.