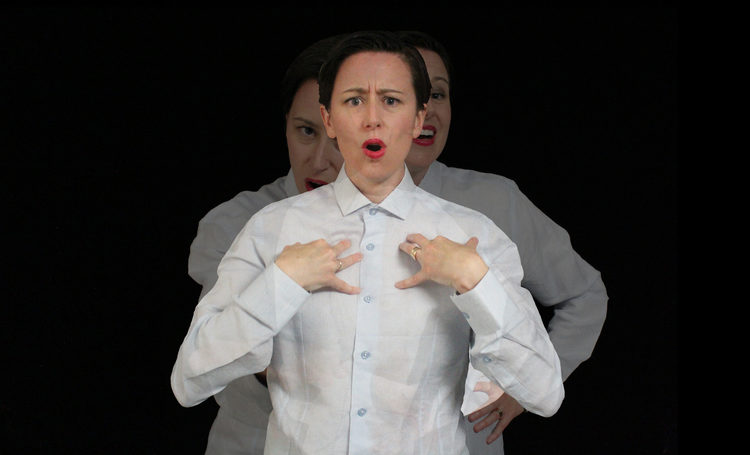 Symphony Space presents Fuse Project April 30 through May 23, which is, in their words: “world premieres, vibrant collaboration, and extraordinary performances celebrating the new!” Experiments in Opera presented six flash operas May 5th and 6th.

These six new teaser works clocked about 15 minutes each of great fun or intrigue. Pledge Drive, Mandela Was Late, Level, The Wallet, Things You Should Know, and The Voices in My Head were all based on short stories by various authors with music and librettos written by six different composers. The constant for the evening was excellent direction, costume design, solid lighting, and strong orchestration, as well as four skilled singers who covered all the works for the roughly 90-minute program with delicacy, power, and aplomb.

Elyse Kakacek, Kate Maroney, Timothy Stoddard, and Eric McKeever proved themselves not only competent but occasionally transcendent. In The Wallet, Elyse’s aria as a battered woman was haunting and heartbreaking, and at the end of the piece, both Kate and Elyse’s characters were caught, singing at the same time, but isolated in uncertainty as their branching future as individuals was intensified by their momentary meeting and connection at the tollbooth. In Mandela Was Late, Eric McKeever channeled a powerful and compelling gravitas in the face of inane inhumane racism and petty bureaucracy.

Alternately quirky, strange, hilarious, and bizarre, these short sketches delighted and intrigued. I wondered at the short story source material, and often wished to see more. A few seemed to be grounded in or pointing to the work of Robert Wilson, Philip Glass, and John Cage. That is to say, the sense of experimentation was strong, and nods to Einstein on the Beach‘s counting sequences. Movement in the pieces was especially engaging, for a form not particularly known for paying as much attention to acting or physicality – kudos to Director Rob Reese.

Jason Cady, Aaron Siegel, Matthew Welch, Miguel Frasconi, Cristina Lord, and Nicole Murphy all provided engaging, thoughtful, and playful works. The strongest pieces for me were the last two. The Einstein on the Beach/Philip Glass style music (which had a storyline about school was musically strong), and the final piece (with its gigantic cowboy hats and silly story about the voices in their head), also sort of met her commentary, with back up of other singers. It was hilarious and surprising and silly and downright enjoyable.

Overall, the sense of play and clear love of performing shown through these new works. Musically, I enjoyed Frasconi’s Things You Should Know, a well as The Wallet, and Mandela Was Late. Pledge Drive and The Voices in My Head won in the laughs department and were clearly enjoyed by the packed house in the intimate Leonard Nimoy Thalia Theater.

This was my first encounter with the series, and I couldn’t recommend it more, especially if you think of opera as staid or boring. These tiny pieces packed a punch and were great palate cleansers – quite fresh and different.