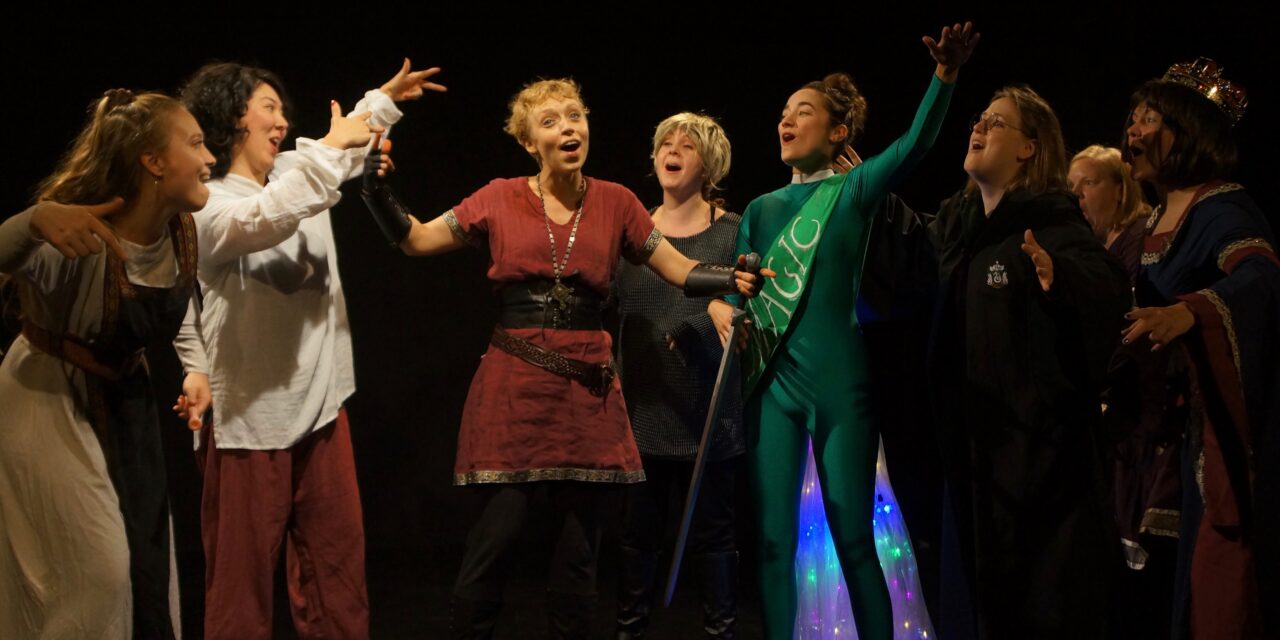 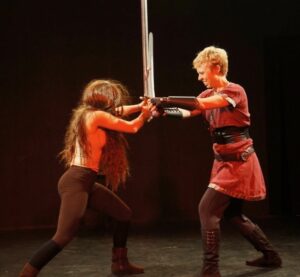 For any lover of fantasy, but especially for those who might have been disappointed by the series finale of a certain TV show this year, The Book of Briarshire is a hilarious must-see.  Written by Kelly Moore who also plays the heroic lead Ylva, this is another play that found its beginning in the Serial Killers tournament at Sacred Fools.  To paraphrase from another review [see Tattered Capes], Sacred Fools is a theatre company that was founded in 1997.  Their series Serial Killers takes place some Sundays at 11 pm.  Scenes from five serialized plays are performed and then the audience gets to decide which three make it to the next round.

Hyper-aware of her father’s heroic legacy, Ylva wants nothing more than to prove herself as a knight but even when she bests every one of the King’s guards, she is still not granted the honor and decides she will have to accomplish something big on her own; she will destroy a dragon to please the King.  Both of Ylva’s parents are dead, all she has is her sister Skittles, played by the delightfully funny Emily Bolcik.  Though Ylva is certain it will be too dangerous, Skittles is determined to come along so she can attend a Nerd pageant and prove her skill on the recorder.  The King (Celeste Pechous) is furious and orders her wizard Wormleg (Debbie Fry) to use Magic (in the person of Marina Mastros wearing a beautiful costume with lit up wings) to end Ylva.  Magic speaks her own language that only Wormleg can understand but it’s clear from her gestures and tone that she is not happy about this so Wormleg, though terrified, agrees to try to help Ylva in spite of the King. 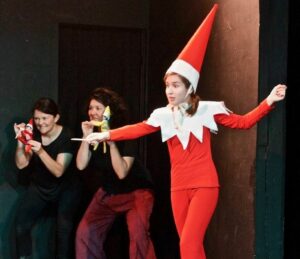 L to R: Lindsey Mallard, Anatasha Blakely, and Megan Reisberg as The Elf on A Shelf. Photo by John Roiniotis.

Ylva calls for her horse, and an actual wooden horse that one might use in construction is pushed onto the stage.  She battles the Elf on the Shelf (Megan Reisberg) and expresses her desire to live up to her father’s name in a monologue that is accompanied by the appearance of images of her ‘father’ Kevin Costner as Robin Hood.  The cast member behind her holding up that image constantly undermines Ylva’s dramatic attempt by changing the picture from Robin Hood to other roles, such as The Mariner from Waterworld, forcing Ylva to constantly correct her.  When she speaks about her mother, we see an image of Robin Wright from The Princess Bride.  It’s clear Ylva and her sister come from some fine Hollywood stock.

But as Ylva continues on her quest, she meets a Cobbler (Anatasha Blakely) and discovers he is actually her father – not Kevin Costner.  To make matters more confusing for Ylva, the Cobbler admits he was never the hero in the family, it was always his wife, their mother, and so when the King sent the Cobbler out to fight the dragon years ago, he hid and has been living in a cave ever since.  A lot happens between the cave and the dragon, and on the night I attended, a lot of it seemed to come out of improv that nearly broke some of the characters into laughter to match the audience’s delight . In a show like this, that is not only fine, it is welcome.  When Ylva reaches the Dragon… well I would hate to give it away… but suffice it to say there is a rightful Queen that needs saving and Ylva is more than up to the task by the end.  This was a welcome invitation to laugh at one of Hollywood’s most overplayed and sometimes most over-the-top genres.  The show is Produced by Conor Hanney.

For more information, here is the link to the Fringe site: 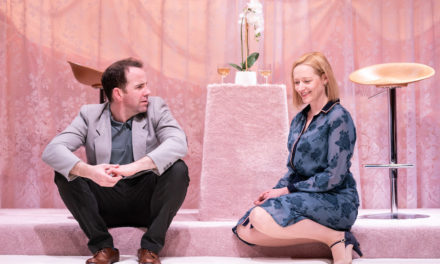 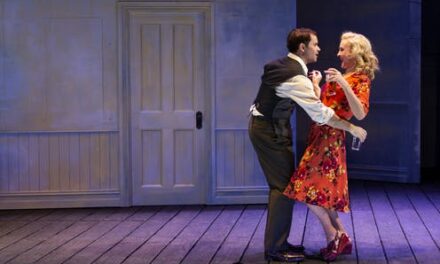