Laura Linney stars in ‘My Name is Lucy Barton’ at the Bridge Theatre. Photo: Manuel Harlan

The story of Elizabeth Strout is one of creative faith and persistence. Growing up in Maine, “a long way from nowhere,” she knew she wanted to be a writer from the moment she picked up a pencil. Perhaps her mother, a teacher, knew it, too. She would give her daughter thick-lined notebooks and instruct her to record her day, every day.

“We went to buy me some sneakers one day and she said, ‘Now write down what the man was like who sold us the sneakers.’ And so I did. She was mother and so I did what she said.”

It taught Strout to observe everything, but especially other people.

Hers was a long apprenticeship. Strout was 42 years old when her first novel, Amy And Isabelle, was published in 1998. She was 52 years old when her third, Olive Kitteridge, won a Pulitzer Prize. In between her childhood journals and seeing her name on the cover of a book, she had never, ever stopped writing.

“At one point I remember thinking I can’t do this anymore and it lasted about 24 hours. I thought, let me just try it from this point of view…”

When she wasn’t writing, she read. She was six years old when she devoured John Updike’s Pigeon Feathers.

Then came William Trevor, Alice Munro, the complete works of Ernest Hemingway–a set “in cheap, blue covers” her grandfather had bought from a door-to-door salesman–one intense summer when she was 16.

She can’t say what she would have been if she hadn’t been a writer.

“I just always knew I was going to be a writer. I didn’t tell that many people because it’s awkward,” she laughs. “Especially as you get older and they’re like, ‘Uh huh what have you published?’”

After college, she worked as a waitress in every restaurant and cocktail lounge in town, then moved to England and worked in The King’s Arms in Oxford–any job that left her days free for writing. It got her nowhere.

“I was constantly submitting and nobody was even remotely interested in my writing… There were small literary magazines and I would read them and think ‘my stuff is better than the stuff in here.’ I still don’t understand, even now, why they couldn’t have taken a story of mine but they didn’t. No no no.”

In her late twenties, she moved to New York to train as a lawyer. She worked as one for six months–“I was just terrible”–and all it did was crystallize how much she wanted to write for a living.

“I was always serious, but as I began to really knuckle down and get older, I realized, ok, I’m not quite good enough. I kept sending in stories to The New Yorker. And the rejections would be nicer every time. I just kept thinking, if I can just keep practising these sentences, then they’ll get better. And that’s exactly what happened.

When I finally began to write my first novel, it was like riding a bicycle. I realized, ok now I’m pedalling away and I can do this. And I did it.”

Today, Strout is 62 years old and the author of six novels; two–Amy And Isabelle and Olive Kitteridge–have been adapted for television, the latter starring Frances McDormand. This week her 2016 Booker-nominated novel, My Name Is Lucy Barton, comes to the London stage, in a production starring Laura Linney, and directed by Richard Eyre.

“She has a perfect eye and ear for the entanglements of families,” says the latter. “And writes with a heart as open as the heart of god.”

We meet in the lobby of the Bridge Theatre. Strout is dressed in black trousers, jacket, and trainers, a flowery pink scarf trailing to her waist. Like her books, she is clipped, careful and quietly compelling in conversation, though she describes herself as a chatterbox.

“That was one of the reasons I had to get out of New England, frankly. I was a little bit of a family embarrassment because I was always talking.”

My Name Is Lucy Barton is a delicate jewel of a novel which opens with the heroine in a hospital bed in New York, recovering from a mystery illness. One day, three weeks in, her mother appears at her bedside and stays for five nights, telling Lucy eccentric tales of people from their hometown of Amgash, Illinois. Between the lines, we learn of Lucy’s impoverished, violent childhood, her successful writing career, her troubled marriage. It is as subtle and sharp as a paper cut.

A follow-up collection of linked short stories, Anything Is Possible, based in the town Lucy left behind, was published last year. They are beautifully crafted, spare, and squeeze the heart–the sort of stories you want to press into the hands of friends. When she was writing them, Strout would visit towns in the Midwest every few months, so that she would know exactly what the corn looked like, season to season.

The Bartons are dangerously poor. Until she was 11, Lucy lived in a garage with no heating and little food; the family had no television, no books, no magazines, no friends, nor neighbors. Theirs is a story of rural isolation, of people who have been left behind. Strout is a writer with a social conscience.

“As I’m developing it, I’m thinking, these are people who should have a voice in this world because they don’t. Vicky [Lucy’s sister], she would have voted for Trump. And I find that interesting.”

Strout never writes a novel from beginning to end. Instead, she writes in “scenes”–by hand, at her dining room table–which may explain her appeal for television and theatre writers.

“The scenes that don’t have a life to them, don’t seem to have a pulse, they just get thrown out,” she says.

After that comes the “terrible, terrifying” job of pulling it all together.

As for her characters, they appear almost mystically.

“When I’m writing, I’m inside. I’m inside Lucy,” she says, as if it is the most natural thing in the world. “There will be different attempts that I make where I can’t get inside there, and then they’ll,” she flutters her fingers. “Go by the wayside. If I can’t find them, then I’m not interested.”

“I had sketched out a few scenes of this woman in a hospital with her mother. And I didn’t pay that much attention to them for a while, but then I finally realized the voice of Lucy was very particular. I realized, I should listen to this voice,” she says. “Pete Barton–how did I know him? I don’t know but I sure did. As I started to work with him, I thought, oh I get you, I understand you.”

She writes every day but only in the mornings, putting off lunch for as long as she can.

“There’s just something about having lunch that…collapses a certain kind of pressurised energy,” she says.

Writing, she says, is a constant “dance with the reader”–do they need some more dialogue here, some more description there?

“Mostly, though, what I owe my reader is truthful sentences.”

Elizabeth Strout: “I was just such a white woman and so much from New England that I didn’t even know that about myself.” Photo: Valerio Pennicino/Getty

She came to this realization, oddly, through comedy. When she first moved to New York and met her first husband, Martin Feinman, a lawyer, they would spend their evenings at stand-up clubs.

“I realized almost straight away that people laugh at something because it’s true. I kept thinking, all those years that my work wasn’t working right, I must not be saying something truthful. I thought, what would happen to me if I had to stand there and have an immediate response from the audience? What would come out of my mouth? It was like putting myself in a pressure cooker.”

And so, aged 32, she took a comedy class. As the final exam–performing a set at New York’s Comic Strip–approached, her classmates dropped out, one by one. Not Strout. She got up on stage and found her voice–that of a “really uptight white woman from New England.”

“I was just such a white woman and so much from New England that I didn’t even know that about myself until I began to make fun of it. I was finally realizing oh, this is who I am.”

Almost immediately she began to write her first novel, about, yes, a very uptight white woman from New England. She was so good, the Comic Strip asked her to try-out for a regular Tuesday night spot.

“Later I thought, wow. But at the time, I thought, absolutely not. I would die.” 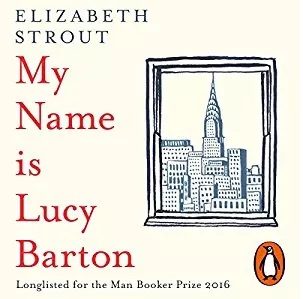 Still, the experience made her the writer she is.

“To say the unsayable, to say what we’re all thinking but won’t say–I think a fiction writer should do the same thing,” she says.

Shame runs through Strout’s novels like it does through the best confessional stand-up, I suggest.

“Exactly. If other people can read that and think, ‘Oh I know that feeling and now somebody else had that feeling as well,’ that should be a comfort, I hope.”

Or, as Lucy Barton puts it, books “made me feel less alone…And I thought: I will write and people will not feel so alone!”

Now she still lives in New York (with a second home in Maine), with her second husband, Jim Tierney whom she met when he came to one her readings and introduced himself as a Maine native. What marks out a Maine man?

“It means being taciturn..to be very hard-working, to be sceptical of pleasure,” she explains.

Growing up, “like Lucy Barton,” she didn’t have a television.

“We didn’t have access to the world in many ways. It’s not uncommon in Maine to be like that. It’s a puritanical thing. We just missed popular culture. In my thirties, I did think for a while, let me try and catch up. There’s no catching up.”

Even now, she barely watches television.

“I just never figured out my relationship to it.”

Her daughter from her first marriage, Zarina, is a playwright. Does she offer her advice?

“I read some recently and I said, ‘Zarina, this is really good.’ I always tell her it’s good, but it really was good. She’s got a very different take on things. She writes in verse.”

Strout is now well into her seventh novel, she says with a tiny sigh. And after that, a return to Amgash? Or will this play be the last we see of Lucy Barton?

“I don’t think I ever actually say goodbye to any of my characters,” she says, unblinking. “They’re always wandering around in my head, some place.”

My Name is Lucy Barton, Bridge Theatre, London, to June 23.

This article was originally published in Inews on June 5, 2018, and has been reposted with permission.