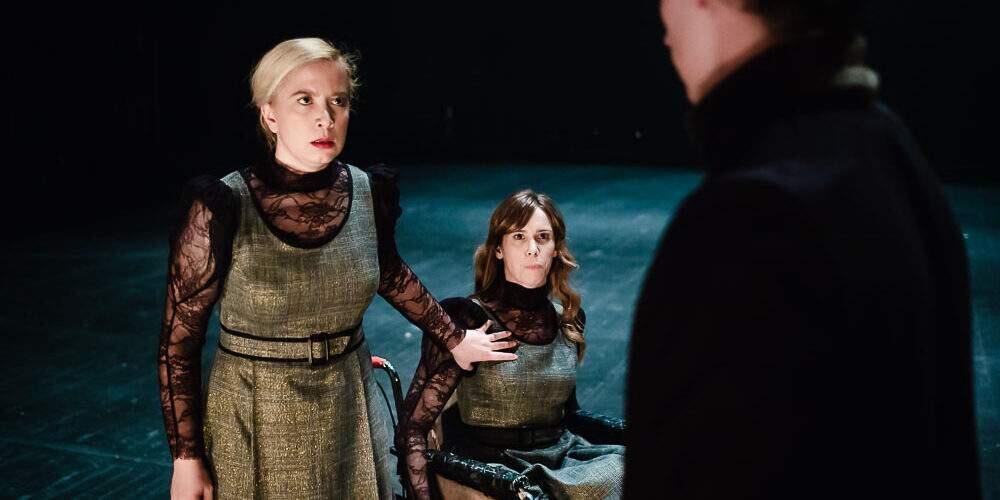 It is almost impossible to begin a review of the newest title in the Zagreb Youth Theatre (ZYT) program, Brothers Karamazov, without mentioning it is first and foremost a comeback of Oliver Frljić to the Croatian theatre scene. The last time he directed in the Zagreb Youth Theater was back in 2013. and since his work with Kerempuh in 2018, he has not been present on Zagreb’s stages which consequently sharpens the perspective on the Brothers Karamazov as potentially a new, mature era in the well-known director’s path.

Truly, the Brothers Karamazov show a certain artistic matureness which hides in the ability to handle with finesse and precision the balancing of the respect towards the original material, acknowledging its inherent needs and atmosphere, and incorporating your own authorial signature in a way that complements and actively communicates with the source material.

Frljić and the rest of the team trust the Dostoevsky corpus wholeheartedly, not meddling with its poetics and progression and yet, they manage to bring forth the raw energy which Frljić got us accustomed to over the years, in an evolved but still distinguishable manner.

The performance is divided into two parts: the first one is titled “Happy families are all alike” and tracks the main storyline of the Karamazov family while the other named “Every unhappy family is unhappy in its own way” is dedicated to the secondary plot of the Snegirev family and the children of the lower class that the middle-child of Karamazov family, Alyosha Karamazov (Adrian Pezdirc) spends time with.

Each part functions as a coherent performance on its own, but only by going to the first and the second one does the viewer complete the theatrical mosaic that Frljić and his dramaturge and co-author of the adaptation, Nina Gojić constructed. The shows are united by the same visual aesthetics: the vast open, industrial-looking space of the ZYT main stage – Istria is used as a canvas to propose layered plans, echoing the two-parted principle of the adaptation. This boundless space is used to roll in and out the characters of the Karamazov novel using caskets, carriages, grand dining tables, wheelchair(s), etc, all enveloped in the darkish tones of black, grey, and brown, only to be juxtaposed with a bloody red at critical points.

The redness marks the dresses of Katerina Ivanovna (Katarina Bistrović Darvaš) and Grushenka (Linda Begonja) emphasizing their sexual energy which runs the love triangles in Karamazovs, as well as the scenographical elements like Arina Snegireva’s swollen legs or the doors to the Snegirev’s house which are built from Dostoevsky’s book(s) (red title pages). The network of symbols that transcends both evenings of the Karamazovs is strong and well-postulated. It forms clear and powerful images that respond to or continue the conversations started by Dostoevsky in his work.

One example is the entrance of the father Karamazov in the first part and the corresponding image of Ilyusha’s dream in the second. Happily debauched in the carriage, the Karamazov patriarch is carried onto the stage by his three sons, all with horse collars around their heads and necks, dragging their Karamazov heritage around the world. Alyosha falls to all fours and turns into a carrying horse once more in the dying child’s dream of Ilyusha who only wished for his family to move to another town and get a second chance somewhere on a farm: the back of Pezdirc (Alyosha) is covered in pillows and blankets and the Snegirev family hops on to the dying bed-turned-carriage, only to be disappointed by its non-moving horse. Seems like poverty cannot be schlepped away all the while the extravagance of the upper class is breaking on someone’s back.

Milivoj Beader who plays the elder Zosima creates a stunning role thanks to the elegant and intense symbolical language of Frljić’s staging. The religious and moral centre of the novel has his clothes removed almost immediately on the stage, revealing, in turn, a fragile man’s body open to stares and judgment. Beader continuously looms the stage from various points, in a quiet and slow pace, walking with a wooden walker back and forth. The walker later serves as the stage prison for the falsely accused Dmitri which is one of the many examples of how insightfully Frljić approaches playing with different theater elements to layer meanings. Like the Christ in the famous story of The Grand Inquisitor who is captured in Sevilla during the Inquisition, Beader’s Zosima is also a silent figure who, even if holy, can not practice (or rather, will be stripped of his holiness) in this Karamazov tainted world. 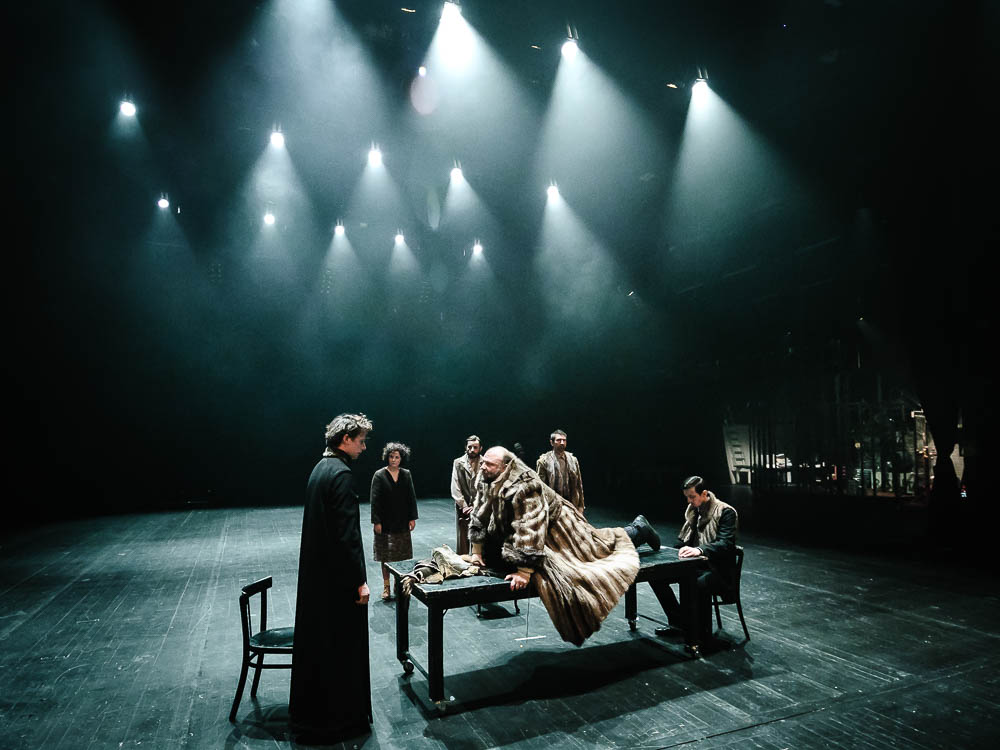 This tale of the Inquisitor is retold in both of the Karamazov shows: the first time by the character of Ivan Karamazov (Dado Ćosić) and the second time by Kolya Krasotkin (Ivan Pašalić), once more knitting the delicate web of connections and metaphors that the Karamazov’s offer, pin-pointing and linking Ivan and Kolya as the progressive thinkers who do not allow moral and justice to be simplified formulas.

The narrative developments in Frljić and Gojić’s theatrical interpretation of Dostoevsky’s Karamazov are delivered in a way that feels like they are falling out of a music box, its sheets and sheets of words articulated in staccatos and legatos by the, always impressive, Zagreb Youth Theatre ensemble, revealing and conveying a machine that never stops. The atmosphere of the Brothers Karamazov is truly a gruesome one, the world on Frljić’s stage feels like a view into the belly of the beast, with no God in sight or without a person wanting to or even being capable of finding one.

This culminates in an all-inclusive bacchanalia in the first part which is accommodated by a postmodern montage of music numeras (including Boney M.’s Rasputin and the Ederlezi song) and a choreography on a vertical metal construction that, with its candle and tomb-like shapes, evokes a cemetery. From it, all the characters around the Karamazov family hang, now that the murder and death of the corrupted patriarch have destroyed any sort of moral grounding in the(ir) world. We may find out that the fourth, deprived brother Smerdjakov (Danijel Ljuboja) was the one who did the deed literally but this vortex of human brutality is far more complex in Frljić’s staging, much like it is in Dostoevsky’s writing.

The second part does not crescendo like the first one. It is more of a reflexive pair of the first one but that still keeps us in the same pot: if we were in the ever-hungry stomach of the beast’s belly in the first show then the second is its bowels. The creative team uses the collective of characters, namely the children which are at the society’s bottom, and the Snegiryov family for a meta-commentary on Dostoevsky’s opus and the political and philosophical ideas that follow it.

Petra Svrtan does a tremendous job of portraying Ilyusha’s older sister Ninochka who, due to the ever-deepening financial ruin of her family, abandoned her intellectual path in Petrograd and returned to live with her decaying mother, father, brother, and sister. The scene with her and the children’s teacher (Milica Manojlović) that is structured around the turning of the chalkboard from which various paroles appear and disappear, is a precious episode in which the questions of feminist struggle, shine a light on a deeper political conundrum of who has the means to actually enter the political arena? What are the options for those at the bottom of the barrel, in the bowels of the beast? – Religion? Revolution?

Frljić stays true to the polyphony of thinking that is central to Dostoevsky and never serves the audience with a one-dimensional answer. In the midst of the aggression on Ukraine, Brothers Karamazov, willingly or not, became even more vital and current as a performance and entangled with the notion of how much can art influence politics. It is certainly true that it can not stand outside of it, something that Frljić and Dostoevsky both understand very well.

Frljić briefly addresses the current global affairs through including parts like the broadcasting of Putin’s speech about the Ukraine invasion. He also utilizes the Dmitri Karamazov character (incorporated by the talented, young actor Ugo Korani) and his macho energy, to put the others at gunpoint out of mere need for violence and chaos. He swings his gun around (like the hungry power man tends to do) while he names and curses the political actors of today in a raging outburst.

These references are subtle but speak a tremendous amount. Unfortunately, much like in the real world, it seems like history keeps on repeating itself and evil cannot be transfused out of our human blood.

Frljić’s The Brothers Karamazov is a slow twisting of the audience’s stomach, without too much hope in sight, but is also an aesthetical pleasure which bears witness to the maturity and the wisdom of its director and his team who have produced a complex and well-rounded patchwork analysis of what “karamazovshtina” is.

This article was originally posted to SEEstage.org on March 17, 2022, and has been reposted with permission. To read the original article, click here.