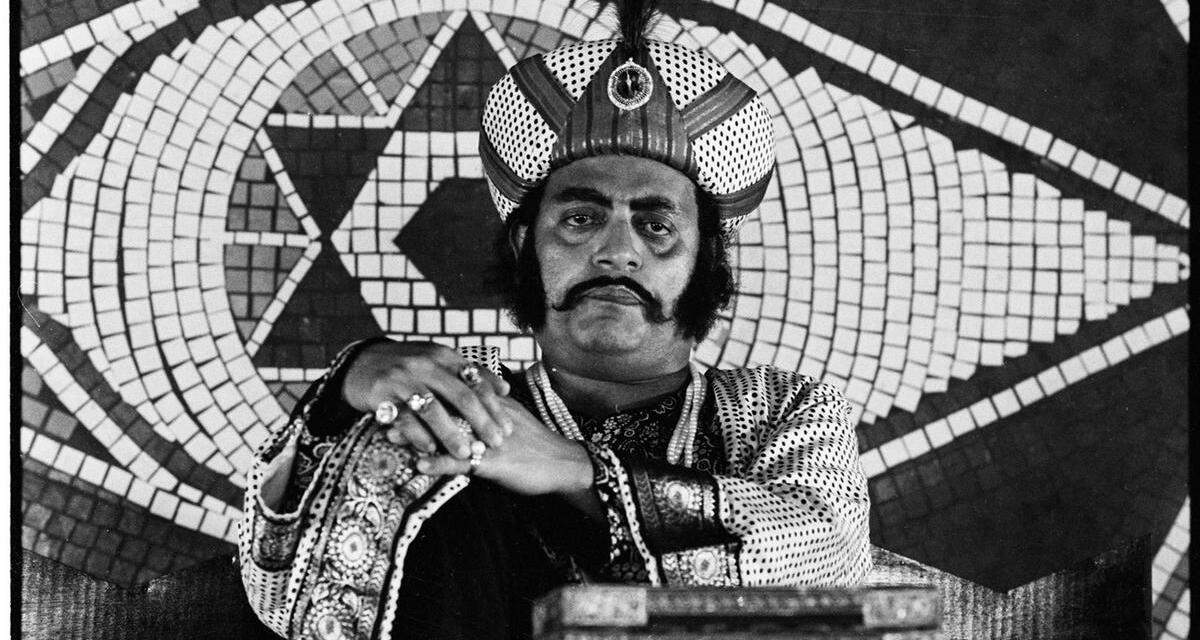 The immediate trigger for the play was political and topical. West Bengal, in 1971, was passing through extreme instability.

Fifty years ago, Utpal Dutt’s play Barricade stormed Kolkata. Since I believe its content has great relevance today, I decided to translate it. A political play, it is apparently about the Nazi takeover of Germany in 1933, but is really about events taking place in India in the turbulent years leading to the Emergency.

Here I pause to introduce Dutt to today’s readers. Acknowledged as among the trailblazers of post-1947 Indian theatre, he and Badal Sircar stood the tallest in original Bengali drama, with over 50 plays each. While several of Sircar’s plays have been translated into English, Dutt never received the same recognition. Dutt pledged allegiance to Marxism from an early age. The eminent Bengali critic Kironmoy Raha called him “the foremost proponent of political theatre with a pronounced leftist orientation. Dutt staged his Angar (1959) on a coal-mine disaster, the first of a series of spectacular productions in which he aimed to cast a spell on audiences through the use of lights, sound, music, visual grandeur, tense acting, and melodramatic situations… the spell held viewers captive and receptive to the message.” 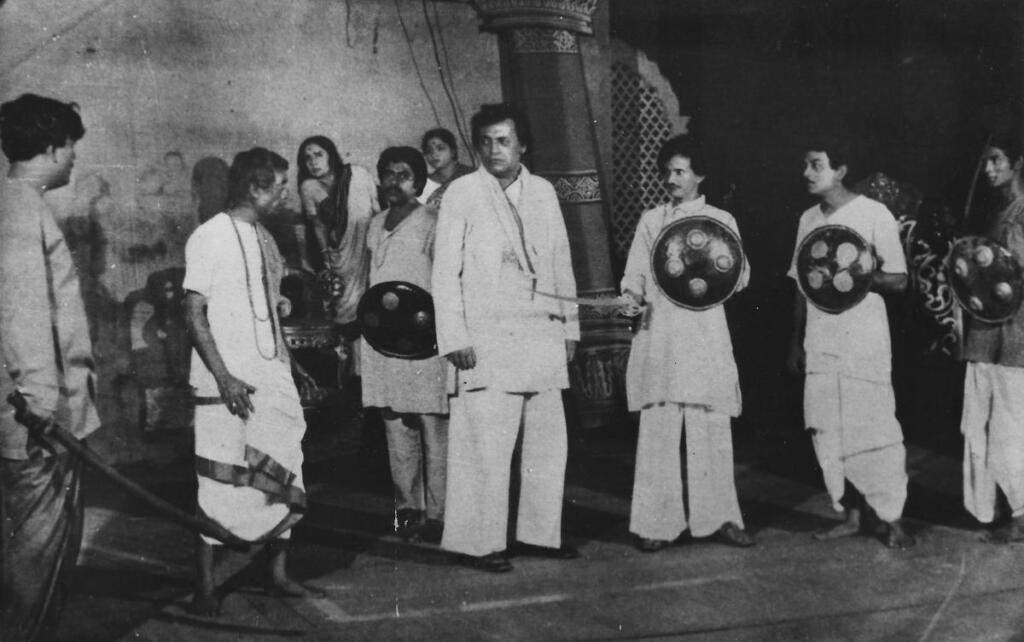 A moment from Utpal Dutt’s play Tiner Taloyar with Dutt at the centre.

There followed such powerful hits as Kallol (1965), Tiner Taloyar (1971), Barricade (1972) and Duhswapner Nagari (1974). Leading cultural commentator Rustom Bharucha says that Barricade “stunned” him with its “huge shadow of Hitler gesticulating like a madman, intricately choreographed street fights, the jury sitting with their backs to the audience in the orchestra pit — memorable theatrical effects.” Dutt continued staging remarkable plays like Ajker Shah Jahan (1984) and Janatar Aphim (1992).

The immediate trigger for Barricade was political and topical. West Bengal, under President’s Rule as the Naxalite movement crumbled in 1971, was passing through extreme instability. Hemanta Basu, a respected 75-year-old leader of the leftist Forward Bloc party, had been stabbed to death in February 1971 outside Kolkata, which had seen many politically-motivated assassinations. Occurring just before the general elections in March, the killing horrified everybody. The Congress Party and others blamed the CPI(M) for the murder, making it their campaign plank for the legislative assembly elections, which were held simultaneously.

Nevertheless, as Dutt pointed out, “the CPI(M) emerged as the largest single party in the State.” However, a Congress-led coalition formed the government, lasting merely three months before collapsing into another spell of President’s Rule. “In 1972,” wrote Dutt, “we had to take the offensive. They were making a Reichstag Fire trial out of the murder of Hemanta Basu. They were trying to put the guilt on the communists and hoping to win the elections that way… and to the shame of the intellectuals, not one voice was raised against this naked aggression against democracy.”

He found near-identical parallels to the Nazi takeover of Germany. The decision to describe Barricade as a “historical drama” was a wise move that protected him from political vendetta and prosecution, whereas spectators understood the implications without any difficulty. Bharucha recalls, “I can still hear the audience cheer the climactic moments of the trial and abuse the Congress government with gusto.”

Dutt himself commented ironically about the reactions, “IPTA [Indian People’s Theatre Association] and the windbags in its leadership found nothing in the play worth liking, and though they themselves were doing absolutely nothing, so scared were they of the Congress brownshirts, they furiously attacked our play.”

The CPI revoked an invitation to stage Barricade. Dutt described the curious circumstances as follows, “The first attempt to censor plays under Indira Gandhi’s rule came, not from the Congress, but from the rightist communists. Thereafter, Barricade ran into rough waters. Gangs of heavily-armed and drink-crazed rogues would regularly visit us backstage and warn us not to say anything against the Lady. We would counter it with a simple argument: The play is about Hitler, why does that hurt you? Do you then admit that the cap fits, that you are Nazis? They usually left after that.”

The six main characters in Barricade represent important functions of democracy: the media, the polity, the judiciary, the intelligentsia, the citizenry. The protagonist Otto, an investigative journalist who remains doggedly independent, practices a professional dedication to fact-checking and truth, and ultimately places ethics over personal safety. Even the antagonist, SS leader Lippert, declares in court that witch-hunting is anti-people, “We shouldn’t pay heed to this sort of leaflet unless we’re absolutely certain. Because then it won’t be a killer’s trial any longer, it’ll get transformed into a comprehensive blow against an entire political group. That’ll be the grave of German democracy.”

We might be tempted to take him at face value and approve of his sentiment, locating him among the liberal factions of the Nazis in 1933. More likely, he speaks disingenuously here, like the Nazi Party had done initially. This recurrent streak of irony in Dutt’s writing rises again when Otto’s boss, the co-opted newspaper owner-editor Landt, reacts appreciatively about Lippert’s seeming fairness, “People say about these Nazis, they’re enemies of democracy!” With politicians and press complicit, Dutt reposes the greatest trust in the legal system, in the person of the impartial Justice Voss who threatens Lippert with contempt of court in his last appearance — just before the Nazis do away with him. 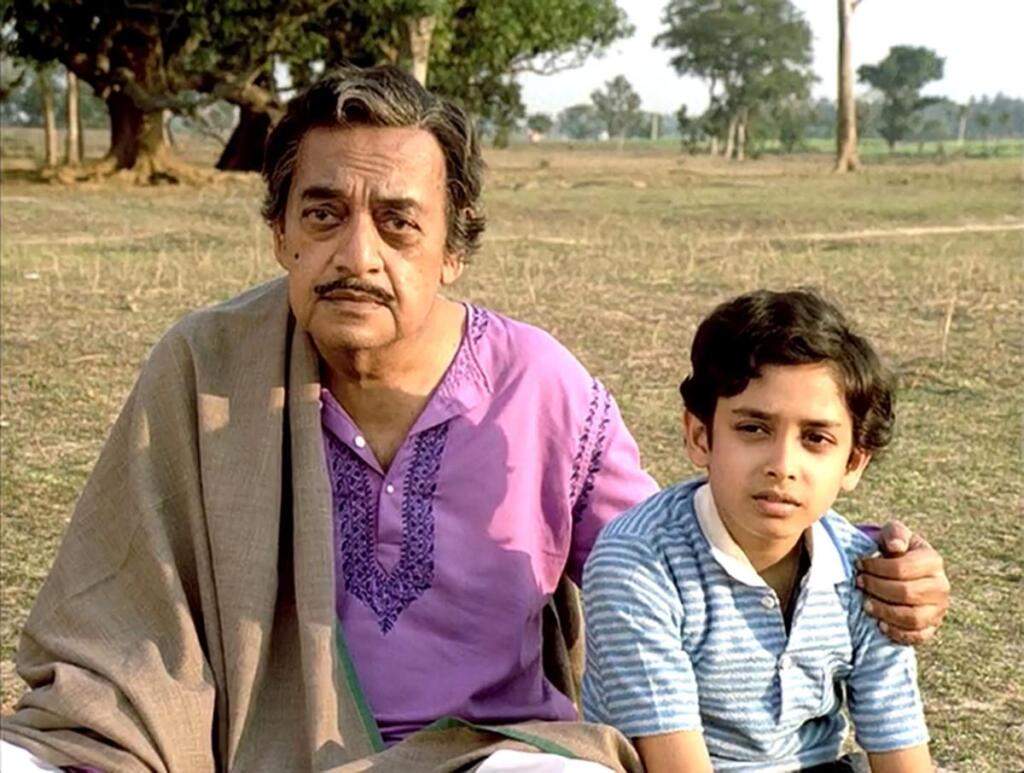 Dutt wants intellectuals and commoners to stand up strong as Voss, not become compromised. The erudite eyewitness Dr. Strubbel distances himself from current affairs and prefers reading literature instead. In the end, after the Nazis infamously set books ablaze in front of Humboldt University, Strubbel’s conscience stirs, “If I have to survive by carrying out their commands, where’s my respect for reading Schopenhauer and Karl Marx? They’re burning books, understand?”

Dutt’s portrait of Ingeborg Zauritz, whose assassinated husband is his fictive equivalent of Hemanta Basu, is the most complex. She rejects violent extremism categorically and is a devout Catholic, “I’m not a Communist, I don’t know anything except Jesus.” When the Nazis capture and torture her adopted son Paul, she says, “You’re the end of civilization. You’re crucifying Jesus again.” In the finale, standing at the barricade, she says, “Now I understand, the Communists die first, then the others’ turns come one by one, then… then one day I see the entire country’s a jailhouse.”

History repeats itself. Consequently, the purpose of political theatre alluding to the past as a warning to the present retains utmost validity. Today, the surge to power of rightist parties and fundamentalist fanaticism across the world means that the co-option of democracy and civil society leading to Nazi fascism can happen again — or indeed has already happened — thus restoring to Barricade its immediate urgency.

The author is a leading theatre scholar and translator. His new translation of Barricade is published by Seagull Books.

This article was originally published by The Hindu on March 25th, 2022, and has been reposted with permission. To read the original article, click here.