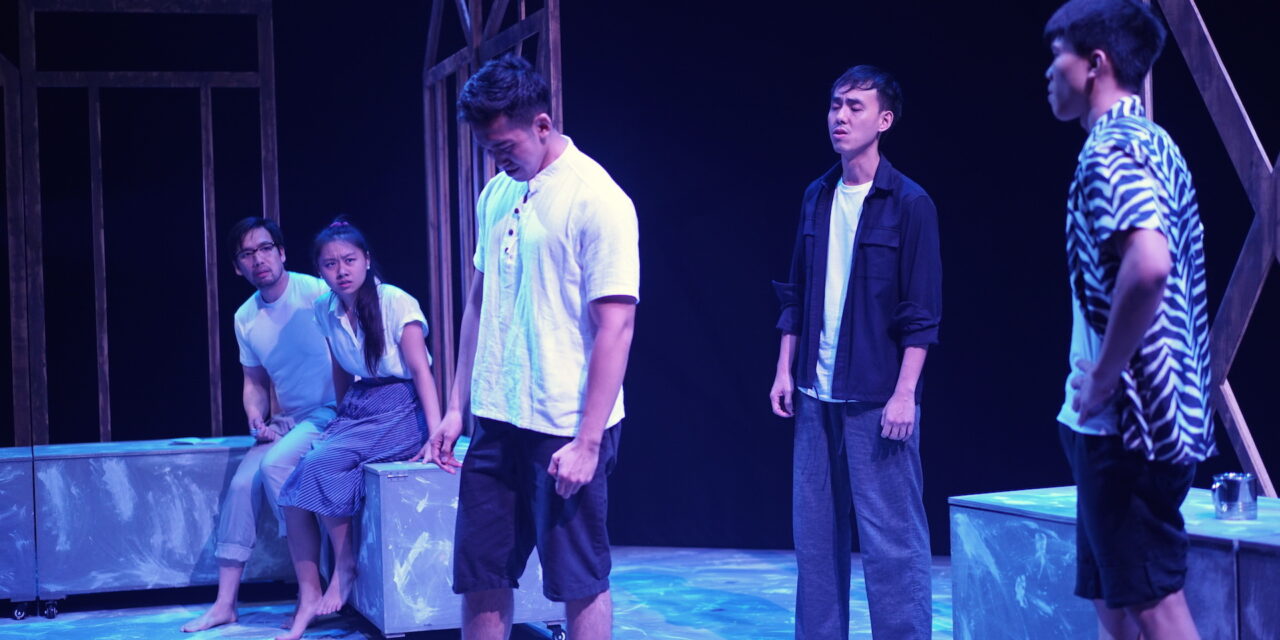 The Second Breakfast Company restaging Goh Poh Seng’s The Moon is Less Bright is akin to grabbing this behemoth of a national literary relic by its horns and tackling it. The play’s historical weight is considerable, its setting has become distant and its language almost absurdly lyrical. Reviving this play is no small feat: they are juggling a rehashing of what has already been said, responding to it, and offering new insights in the process.

In the director’s foreword, Adeeb Fazah reveals that the team – together with dramaturg Dominic Nah who adapted Goh’s text for this restaging – was “stumped by the presentation of the language” at first. Indeed, the lyricism in the play demands the audience’s attention, and they are made extremely aware of the presence of the English language. The production manages to critique and comment on this while deftly crafting an enjoyable performance in spite of it. At times, the production even hints at a cheeky questioning of Goh’s text. As Kim Chuan (Ivan Choong) waxes lyrical about the scorching heat, Chee Hoon (Qotn Van) comically tries to interrupt him but to no avail, resigning herself to wait for him to conclude his oration. At other times, the production skirts around the problem of stasis that long monologues create by focusing the direction on what is left unsaid. Quick, silent snippets such as Choo Leng’s (Cheryl Tan) short burst of laughter during a transition provide moments of dynamic action as a breather from the text. 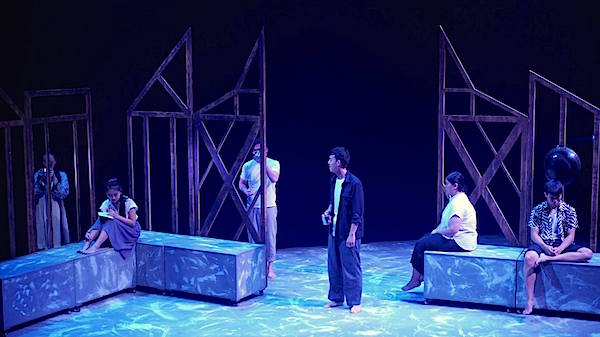 The production not only highlights the status of the English language in our predominantly middle-class society, but also the privilege of a middle-class audience being able to understand it. Van effortlessly speaking the Queen’s English on her tongue as a wealthy, middle-class Chee Hoon reveals the pervasiveness of this colonial inheritance in our society. Hearing Xie Shangbin slightly struggles in delivering the lyrical dialogue of farmer Kim Hong reminds us of the imposed nature of this very inheritance. But to focus on the middle class would be to completely miss the point of The Moon is Less Bright. The play revolves around a family of peasant farmers taking in their relatives from the city, who are seeking refuge from the chaos of the impending invasion by the Japanese. What is perhaps even more striking than the class tension between the characters is the class tension between the characters and their language. The characters of Kim Hong, Poh Suan (Miriam Cheong), Ah Seng (Benjamin Koh) and Ah Huat (Fadhil Daud) are endowed with the language and rhetoric of middle-class English, in direct contrast to their rural Chinese background. While their situation can be described as harsh and punishing, they are portrayed to be anything but helpless. The characters of the peasant class are idealistic and resilient, imploring for the audience’s solidarity. To invoke linguistic and psychological realism on these characters would have been to portray them as an Underclass with a capital ‘U’; evincing unsought-for pity and sympathy when what they truly ask for is concrete action for change. In this regard, The Second Breakfast Company’s decision to defend Goh’s lyricism is a battle that pays off well. It is through this that the production avoids exploiting the lower class for tragic effect.

The production goes on to comment on the subtler themes buried within the play. While The Moon is Less Bright is set in a Singaporean farm around the time of the Japanese invasion, the set for this staging does not immediately recall Ama Keng Road or Kampung Chai Chee in the 1940s. Instead, Mark Benedict Cheong’s set design seems deliberately dislocated in time. The geometric shapes of the tall wooden panels, affixed to movable blocks, are at once reminiscent of traditional room dividers and shattered skyscrapers. The white paint brushed sporadically across the floor recalls both the sand of the barren earth and the crumbled debris of concrete. The play is set in the past, but the production foregrounds the sense of an ever-impending future in the play. This adaptation has Poh Suan open and close the play with a prayer to protect her family from the “impending” war: a minor edit that goes a long way in blurring the lines between a historical catastrophe and a looming apocalypse, creating a continuous cycle from the past to the future and back again. It’s a textbook example of transforming a fable into a warning. 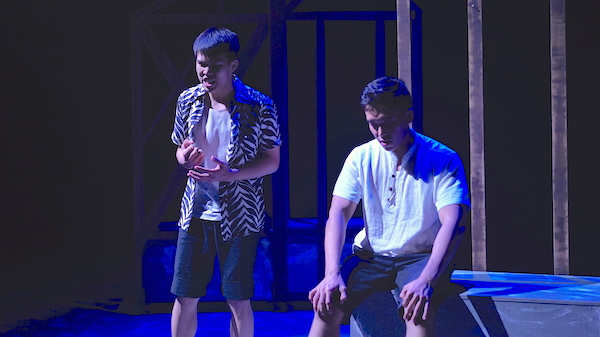 Behemoth though this play may be, it is one that only a young theatre company can tackle best. Considering that this play was originally staged for an audience of university undergraduates, The Moon is Less Bright captures the fervor and idealism of youth in its young characters, Ah Huat, Ah Seng, Choo Leng, and Lian. It is no coincidence that Goh Poh Seng portrayed the “old and infirm” in the play to be worn, tired, sick, aloof or snobbish, and the younger generation to be the agents of action. The production displays its awareness of this fact: many of the transitions feature the younger generation more memorable, and the energetic performance of the actors of these characters is contrasted with the performance of the older characters to be deliberately ponderous, whimsical or snobbish. Notably, the transition scenes mark Choo Leng’s increasing disillusionment with the world around her. Early on in the performance, we hear her laughter, later we see her with Ah Seng flagging down a bus to visit the town, and after that, we see her rushing home, crying and nauseous. After witnessing the horrors of the Japanese Occupation, she begins to lose faith in the world, so much to the point that “the moon seems less bright” to her. But it is Choo Leng herself who exemplifies the real reason why that is the case: the old moon is less bright as it wanes for the new moon to happen. Instead of giving up her end of the fight and storming off the stage, she resolutely decides to stay on to effect change where it is needed most, amongst the underclass. Meanwhile, the older generation of the middle class finishes packing to leave.

The Second Breakfast Company is commendable in their efforts to produce oft-studied but less performed plays from the Singaporean literary canon like The Moon is Less Bright and Family by Leow Puay Tin. The company takes the literary and academic themes and issues muffled under the printed text and bring it forth into an immediate and live present. Maybe a young theatre company two years of age could be criticized as biting off more than they can chew by presenting the oldest play in the canon from Goh Poh Seng, laden with his romantic view of youth and change. But their restaging of The Moon is Less Bright addresses the perennially important issues of social inequality while commenting on the differences with our current situation, and if one is truly moved by the plight of our underclass, then a romantic call to action must prevail over disillusioned defeatism. And that will be the behemoth that we would all have to tackle.

The Moon is Less Bright by The Second Breakfast Company ran from 31 May to 3 June 2018 at the Drama Centre Black Box. The play was written by Goh Poh Seng in 1963. It has since been staged twice: in 1964 and in 1990 by Theatreworks.

Guest Contributor Eugene Koh has a wide and varied plethora of interests, from banknote collecting to creating constructed writing systems. His greatest interest lies in the craft of theatre and is currently pursuing a Bachelor’s Degree in Theatre Studies at the National University of Singapore. He is committed to encouraging and engaging with a new theatre scene that is brave enough to tackle uncertain issues in a challenging world of the future. 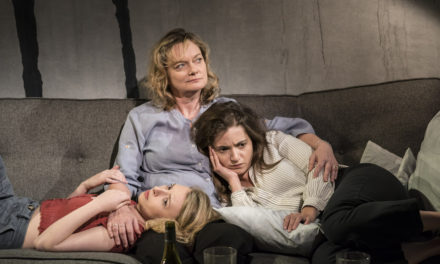