A four-day festival Documenting Ukraine was held last weekend in London bringing together Ukraine’s leading names in documentary cinema and theatre. The theatre section, hosted at GRAD in Central London, comprised two live performances in their main gallery space: acclaimed German theatre director Georg Genoux performed his solo multimedia piece, Anyone Can Be Saint Nikolai, and there was a staged reading the following night of a work-in-progress by leading Ukrainian playwright Natalia Vorozhbit, the autobiographical Can I Or Can’t I.

A key point of the festival was to provide a space in which Ukrainians could tell their own stories in their own words – something elided from view in mainstream media – and both Genoux’s and Vorozhbit’s projects bear witness to such personal narratives. Though they worked together as volunteers in the Eastern Ukrainian town of Nikolaevka, Genoux and Vorozhbit presented two very different works exploring the experiences of those most affected by the war: Vorozhbit tackled the conflict at Donetsk airport through an autobiographical monologue, while  Genoux described his time as a volunteer in Nikolaevka and showed a film about the experience:  Anyone Can Be Saint Nikolai. 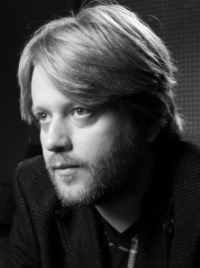 Genoux, with a group of volunteers, worked in a school in the town, rebuilding parts destroyed during a four-day conflict. But besides material reconstruction, the volunteers also worked with the people there, especially the children, and helped them re-build and re-calibrate their lives. Genoux spoke movingly about a number of items he’d brought back from Ukraine that touched him during his time there:  a brown chair, a small bible, and a blue and gold robe. These objects, placed in a white cube gallery just off Oxford Street, became freighted with meaning as witnesses to the events.

Having explained how he came to be in Nikolaevka and introduced his objects, Genoux then presented his film. Silently and relentlessly his camera rolled over bombed-out blocks of flats, abandoned petrol stations and empty snowy landscapes. There were very few close-up shots and little natural sound to the images – the majority were overlaid with first-person accounts by Nikolaevka residents who had lost their homes, and these images and words, delivered by real people, spoke for themselves. Genoux’s work laid bare, as no news item ever could, the real human cost of the conflict.

Afterward, Genoux spoke again – this time putting on the blue and gold robe that had been hanging on a coat stand in the gallery. One of the things volunteers did in the school, he said, prepared for the celebrations of Saint Nikolai, the saint after which the town is named. Genoux’s colleagues persuaded him that out of all of them he was most suited to play the saint – slightly portly, with a strange accent and a thick golden beard and head of hair. The children had written St Nikolai letters – the tone of all of them, over and over, was: “Dear St Nikolai I would like an iPad and peace for Ukraine.” The children fervently believed he was the Saint and that he could intervene and bring peace to the country. 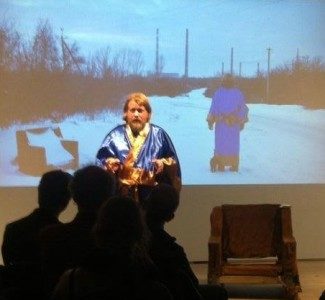 Vorozhbit, meanwhile,  was asked to write a play about the Donetsk airport – an international airport  – once a showcase transport hub for the Euro 2012 Championship – which now stands in blackened ruins. At the time she was approached,  the airport was still under Ukrainian government control, but was increasingly a site of intense battles between the separatist forces of the Donetsk People’s Republic and the pro-Kiev units. Vorozhbit felt the story so moving that as a playwright she couldn’t say no: she started interviewing people and through her research the play took form.

Amanda Drew performed the monologue beautifully, and as the story unfolded Vorozhbit held back nothing. We quickly learned she’d fallen in love with a solder she interviewed for her research: as he drew the location of artillery and tanks surrounding the airport on a napkin for her, all she could do was watch his lips moving as he spoke. The script was deft and sure, taking the audience from the sublime into horrific inhumanity – a particularly gruesome moment being when her soliloquy shifted from idle fantasies about her lover to his description of what happens in war: “We kept bodies of three separatists in the freezer.”

Genoux’s and Vorozhbit’s work gives a strong sense of how the daily fabric of life – going to school, going to the shops – was much like that of any developed nation, be it a town in the UK, Poland or Russia. Both evenings powerfully conveyed how suddenly and profoundly life had changed: the people of Eastern Ukraine used to live in a safe place; they used to watch the news and see conflicts in other places; suddenly the conflict was in their town and on their doorstep. 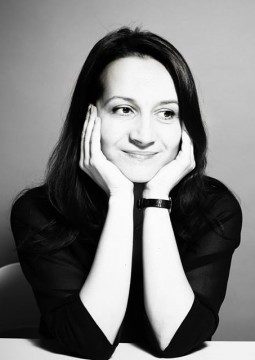 The question of how to stage real stories was debated on both nights. Documentary theatre can be many things: pure verbatim; recorded delivery (when a script is relayed over an earpiece to an actor who speaks the words on stage) or a synthesis of real events told in a playwright’s words. When asked what documentary theatre meant to her, Vorozhbit succinctly defined it as “any story about real people and real events.”  Her working process, she said,  involves understanding all the multiple voices from other people, to the point where, as a writer, “you realize you don’t have your own voice, so then you become their voice.” She described working almost out of “helplessness – all my help would be to go and help the wounded in hospital, but my way is also to be a witness, to write stories.”

One of the dangers, when people give their personal stories for artists to use, is the risk of commodification, that they turn into something they aren’t –  namely “art.” Genoux and Vorozhbit have been entrusted with such stories and clearly feel a tremendous responsibility not to abuse this trust. Both have created powerful works that make it possible to see a more complex, visceral, human story about what’s happening in Ukraine than the mainstream media will allow us. As Vorozhbit put it: “It is true: love can be next to a dead body in the fridge. This is not a Tarantino film – it’s life.”

This article originally appeared in Central and Eastern European London Review on May, 23rd 2016 and has been reposted with permission.