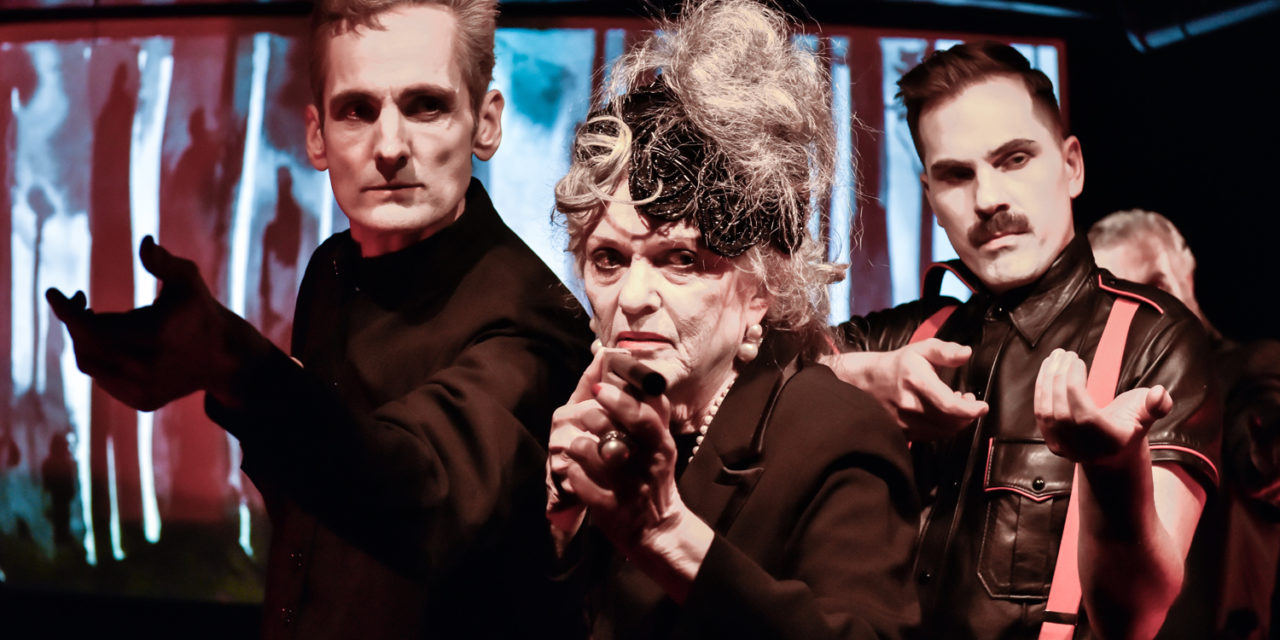 On March 24, 1945, there was a party in Rechnitz, an Austrian town on the Hungarian border. The hostess was Countess Margit Bátthyany, who may or may not have been having an affair with the town’s Gestapo chief, Franz Podezin, a guest at the party. In what would be a prelude to the end of WWII, the Soviet Army was about to invade, but the Countess and her guests decided to have one last hurrah. During the party, Podezin received orders to pick up some 180 Jewish inmates of a nearby labor camp from the train station, prisoners deemed too sick or weak to work. Podezin interned them in the Countess’s stables, and the well-heeled revelers shot them all and disposed of the bodies. The mass grave was never uncovered. The people of Rechnitz boycotted subsequent attempts to investigate the incident. The perpetrators were never brought to justice.

Rechnitz (The Exterminating Angel) is 2004 Nobel Laureate for Literature Elfriede Jelinek’s response to this historical aporia. “I tried,” she has said, “to write a play around a blind spot.” Rather than filling in the blind spot by dramatizing an imagined version of events, Jelinek has written a densely allusive, internally conflicted, 111-page monologue to be spoken by a chorus of messengers who offer competing descriptions of that fateful evening as well as competing philosophies of truth and the transmission of traumatic memory. In classical Attic tragedy, from which Jelinek habitually borrows characters, scenarios, conventions, and motifs, the voice of the messenger is one we trust implicitly. The dramatis personae and the audience rely on messengers to convey in language what is not representable in images. In Rechnitz, the accounts of the messenger are continuously interrupted with slippery qualifications that undermine confidence in their veracity: “I tell it how it is, I tell you what I was told, literally.” Which is it? “I saw it with my own eyes, at least I think they were my own…” No eyewitness seems to trust her own perceptions. “She started to shoot, the countess, the reports contradict one another already…she shot and shot, or did she not shoot at all?” Eventually, the chain of information becomes so vexed that it can no longer be said with any certainty that there were any eyewitnesses present at all. Everyone wants to disavow responsibility. “Remember now,” they emphasize, “we weren’t there.” Jelinek’s dramaturgy is mimetic only in the sense that it mimics the process of historical erasure the massacre of March 24, 1945, has undergone. 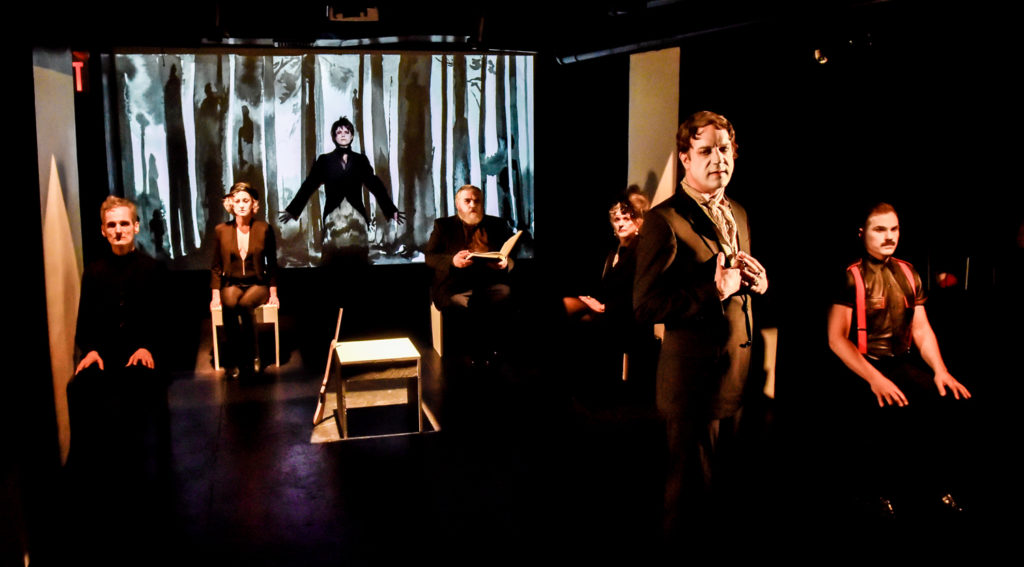 I salute director Ildiko Nemeth for bringing this behemoth of a play to New York, marking only the third time a text by this incomparably vital and sophisticated playwright has been staged here. Jelinek’s stage directions are famously sparse, and instead of traditional characters, she gives her collaborators only “planes of language” to work with. Such radically open texts require muscular intervention by directors to render them stageable, and Nemeth’s confident ninety-minute production is one of countless possible interpretations of this challenging and important play. Everyone should be taking advantage of this rare opportunity to see Jelinek performed on this side of the Atlantic.

Nemeth parcels out the text among seven actors who play contemporary messengers while simultaneously evoking an inbred aristocracy in marvelously eldritch costumes by Brandon Olson (who is also one of the strongest performers). The basement New Stage Performance Space is intimate. The set is schematic and serviceable. The stark lighting and tasteful, abstract projections help shape and differentiate tone in a text that is often confoundingly digressive and repetitive. The main prop is a small wooden rifle, which the older actress dressed to bring to mind the Countess herself wields as elegantly and nonchalantly as a long cigarette holder. The performers periodically circle up and make forceful, obscure gestures. The mood of their sinister cabal recalls a satanic rite. 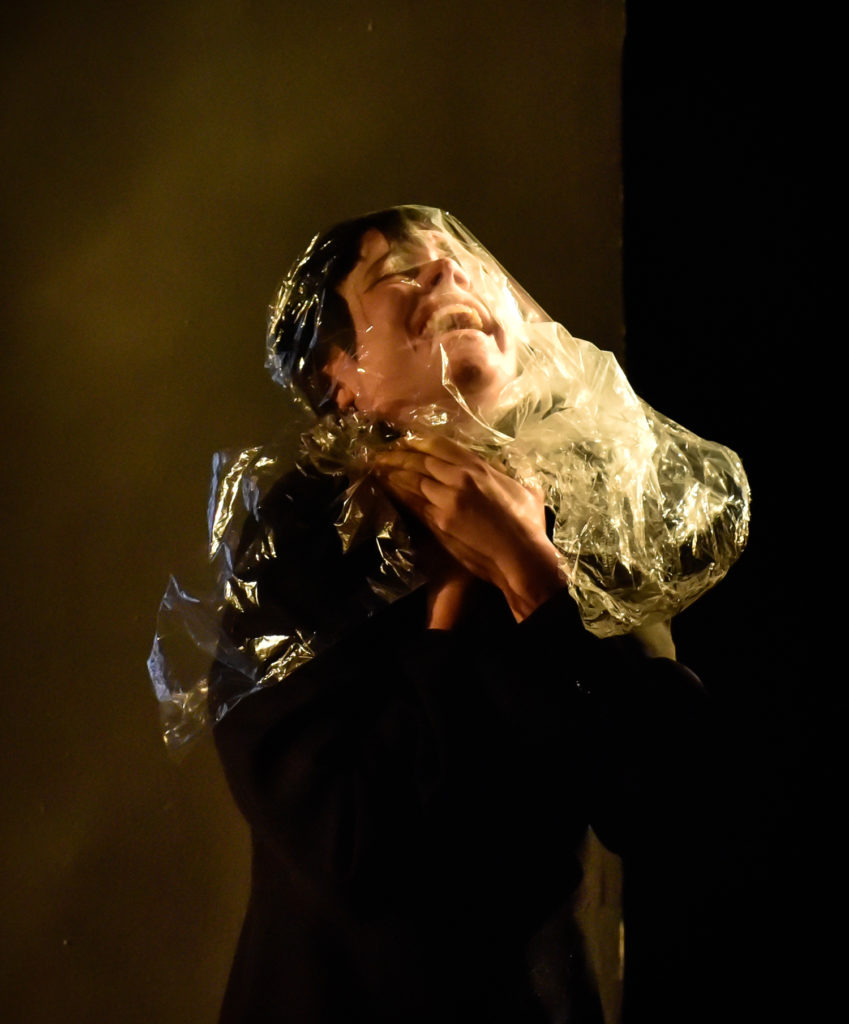 For the most part, the performers take turns speaking directly to the audience. Here they immediately confront the great difficulty of performing Jelinek; they must justify their torrents of speech without having recourse to any of the psychological motivators that could be wrested from a more traditional script. Nemeth does not appear to have imposed on her cast a universal solution to this dilemma, but some of the performers succeed in keeping the text’s writtenness foregrounded in their delivery, speaking as if under duress and letting the effort of ongoing revision show. 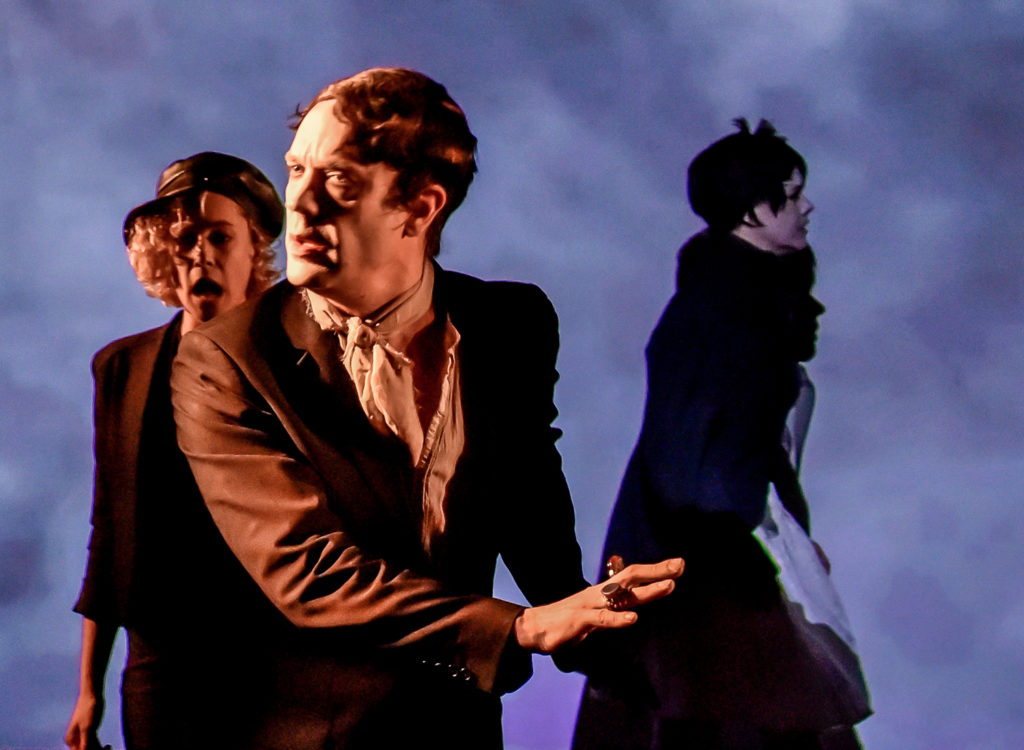 Jelinek’s play is subtitled “The Exterminating Angel,” a reference to Luis Buñuel’s 1962 film of that title. In Buñuel’s film, a dinner party held at a mansion for an upper-crust group turns darkly surreal when at the end of the evening guests find themselves unable to leave the music room to which they have retired for some after-dinner entertainment. There are no physical barriers preventing them from leaving, but despite hunger, serious illness, and crushing despair, the power of some collective hallucination keeps them trapped in the room for many weeks. Only when, by some chance, the group finds themselves arranged in precisely the same physical configuration they were in the evening of the party is the spell broken. Repetition and remembrance set them free, though there are casualties; some of their number do not make it out of the mansion alive. Jelinek portrays the Rechnitz group as suffering from a collective hallucination by denial, a collective hallucination that has never been dispelled because remembrance continues to be forestalled. Like Buñuel’s well-coiffed society types who descend into savagery and derangement when trapped in the echo chamber of their mutually-reinforcing delusions, the messengers of Rechnitz have lost the ability to think for themselves. They have conceded their right to move, shape, and write history.

The production’s biggest misstep (and it is a serious one) comes in its first five minutes. Before the play proper has begun, a sort of educational video in the style of an old newsreel is projected upstage. The video sets the scene and establishes the “facts.” We hear that the Russians are coming. We are told about the Countess’s soirée. As a prologue to a play concerned with contested historical narratives, a play “written around a blind spot,” this early establishment of an “official version” of events is dramaturgically off-base. Worse, the video features actual black-and-white footage of emaciated Jewish corpses being dumped into a mass grave. The audience is in no way prepared for this image, and using it for mere illustrative purposes is both aesthetically and morally distasteful.

But overall, Nemeth makes strong choices that open up the many fascinating and disturbing questions asked by the text. She has clearly earned the trust of her cast, several of whom have worked with her before. Nemeth founded her New Stage Theatre Company in 2002 and recently acquired her own space on the Upper West Side. Hopefully, she will be staging tough, taut productions like Rechnitz for many more years to come. New York needs more dauntless directors like her.