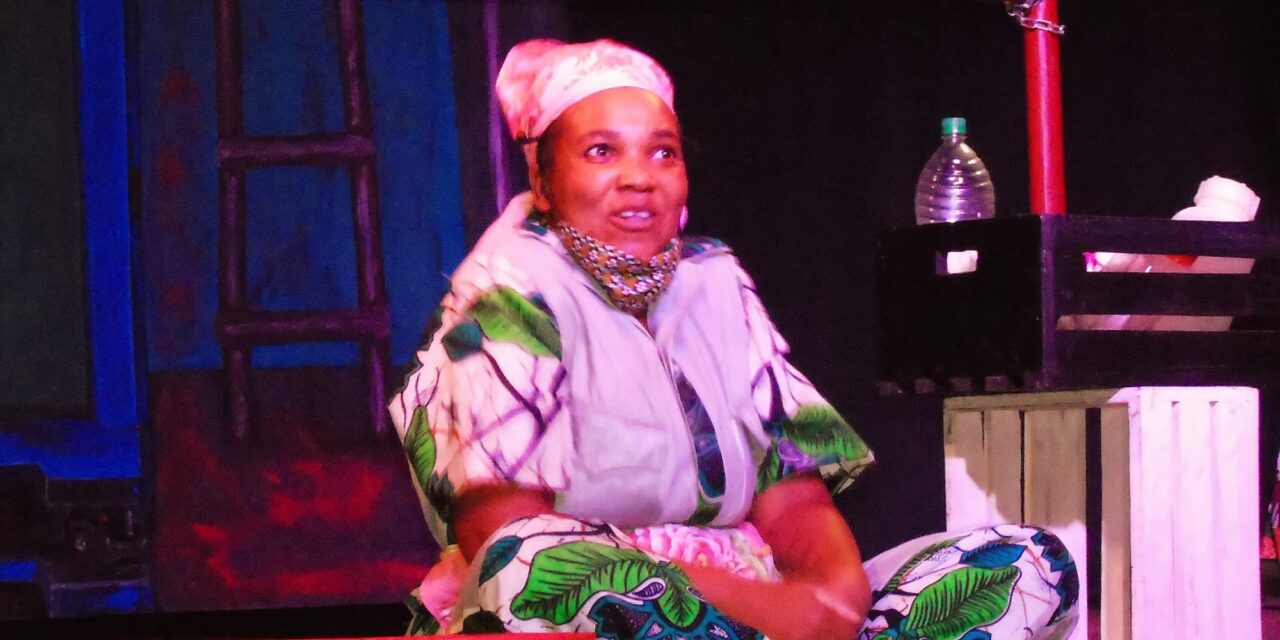 Madsoc Theatre opened their season with Stanley Mambo’s adaption of Tony Layton’s Once an Actress performed by Charity Dlodlo. The atmosphere was electric and there was palpable excitement as the audience awaited the opening of theatre doors at Madsoc Theatre in Lilongwe on March 27th, 2021. The theatre was re-opening after almost a year of closure due to the Covid-19 restrictions. The opening play Once an actress, written by Tony Layton and directed by Stanley Mambo of Mwezi Arts, promised to be an exciting show. With her brilliant solo performance, actor Charity Dlodlo, enthralled audiences with the story of Sarah Mugabe who as the title suggests, was once an actress.

When we meet Sarah she’s working at a factory where she is allowed to use the facility during the weekends to produce her own products. This is where she worked before a friend persuaded and dragged her to an audition for a TV commercial that kick-started her journey as an actress.

Sarah’s story is intricately woven in a series of flashbacks that give us a glimpse into her life as an actress. A journey that took her to acting school, the hard work, the acting offers that came during and after school, and the strife and choices she made as these offers began drying up. Sarah would not take roles that constantly required her to be in the nude so now she relies on her agent to find her some work. In the meantime, she is back at the factory: A sort of fall from glory for anyone who has ever ridden the high of being in the glitz and glamour of the entertainment industry.

Charity Dlodlo’s mimicry of the different characters that Sarah came across in her short-lived career is true to life as she delivers splendidly. The play delves into the complexities of the acting industry and how one’s career can be short-lived, especially when one is unwilling to go against their moral compass. And the Zimbabwean actor understands this all too well. “This play is a mirror of what happens in our lives as artists, especially being a female artist. I could relate to it in so many ways,” says Dlodlo, narrating similar experiences.

“Other people confided in me in what was happening in their lives during production. Being a much senior person in the industry, a lot of young girls confide in me when they have these sorts of experiences whereby they are sexually abused or harassed. So, I thought that this is something we need to talk about.”

Dlodlo effortlessly drifts in and out of Sarah’s and other characters she encounters exploring relevant and timely issues like the #MeToo movement, the Covid-19 pandemic, and other issues told in a way that anyone who has experienced living in an African community setting would recognize.

The Zimbabwean actress with years of experience describes the opportunity to work on the play as a welcome challenge. “I had never done a one-hander before. Going through 18 pages of lines is something I thought I could never do. However, it has been a joy working on this production.”

In her portrayal of Sarah, Dlodlo said that the script was something she could relate to as an actor. “Often, we tell other people’s stories but not our own, so this was exciting for me as we get to tell our story.” As a woman working in the industry, some of the themes aren’t hard for her to imagine. “There were many things that could be similar but, being an African setting, the adapted play had relatable experiences.”  One of the characters Dlodlo beautifully plays is that of Lenah, an actress who gets into a relationship with the director with the promise of favors highlighting the issues of abuse of power and other such undesirable dynamics of senior-junior relationships in varied settings.

“It’s a very tough industry, we need to be strong. If many women can lead the industry, we won’t get to encounter so many sexual abuse cases,” she observes.

Stanley and Hazel Mambo of Mwezi Arts led the creative team behind the production. For Stanley Mambo working with an artist from a different country was too good of an opportunity to let go. This was made easy by the nature of the play – under the current restrictions which require social distancing, one-handers are most desirable.

Still, this was not without challenges.

“The main challenge was going into production during Covid when people are supposed to be isolating. We had to start creating a show in an almost impossible situation after closure due to the pandemic, in a situation where you cannot approach any donor that I am creating a show. We knew somehow, somewhere, we were on our own and it is very challenging to be in isolation,” the founder of Mwezi Arts which runs the Madsoc Theatre, the only purpose-built theatre in Malawi confided.

In adapting the play, Mambo added many elements that are relevant to the African audience.

“There are many elements and new things that this play brings that are not easy to trace back to the narrative of the story, except to someone who knows the original script. There are great additions to the story and movement. The story is originally set in different scenarios and sets, but we chose to play the whole play in the factory which is totally new to the direction. In the original we see Sarah following her life through the years, but we reversed that, we made it a reflection in a day of her thinking about her life to give it a fresh kind of approach. There are many elements of surprise in the show.’

Hazel Mambo worked on the show as the producer and creative set designer and speaks of her creative experience and process on the adaptation as a joy.

“We found elements that we could fuse, to make the story interesting and when Dlodlo mentioned that she could do gymnastics we got the idea of the set bar which also could be a working bench in a factory, whereby she will be able to move about and tell her story, using available elements. The props play a major role in the different scenes- on the bus, in the market and during production of the washing powder. The costume as well, it is difficult for a woman to wear overalls in a working environment so that is why we decided on the overall, giving it feminine elements.”

The backdrop was designed by Frank Pakaine to complement the factory setting of the play.

Because the scene transitions are fast, simple aspects complementing those flashbacks had to be included to take the audience to the moments as the actor recalled and performed them. The play being a one-hander, most creative aspects were successfully executed complementing the actor on her stage journey which Dlodlo does with ease and grace.

Angela Jimu is a Journalist and Visual Storyteller based in Lilongwe. Her work centers around people in their environments. She is a theatre enthusiast, often visually documenting theatre plays. She holds a qualification in Journalism, Photojournalism and a MA degree in Media Management.

This article was originally posted on theafricantheatremagazine.com on April 2, 2021, and has been reposted with permission. To see the original, click here.