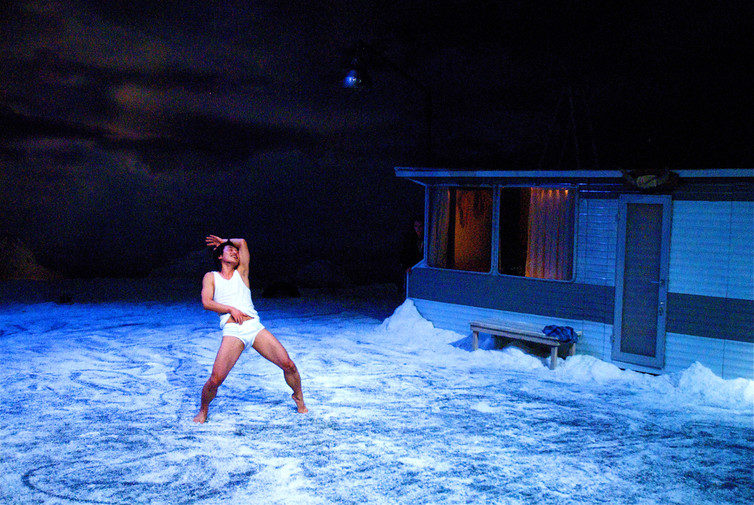 Last week, Melbourne Festival opened with a production from the Belgian dance theatre collective Peeping Tom titled 32 rue Vandenbranden (2009). The company’s founding members, Gabriela Garrizo and Franck Chartier, Argentinian and French respectively, are both a product of the influential Flemish Wave of the late 1980s and 90s, a period of theatrical innovation that redefined the performance language on which their collective now builds.

For artists from the Flemish Wave, the medium of theatre presented an opportunity to explore mechanisms of performance and interrogate dominant ideals of the body and representation.

Radical in these works was the anarchic response to the notion of storytelling. There was no meaning or outcome from a semiotic perspective, but the audience was encouraged to develop what German theatre scholar Hans-Thies Lehmann described in Postdramatic Theatre (2006) as “a new kind of aesthetic alchemy”, from which the senses, intellect, and intuition deftly constructed a subjective position.

Prior to forming the collective, Peeping Tom, in 2000, Garrizo and Chartier danced in both C de la B and the Needcompany. With Peeping Tom, they have taken their own steps to originality, expanding on narrative possibilities and using heightened visual effects to present extreme characterizations; earning them the title “the Pedro Almodovar of dance theatre.”

Their trilogy Le Jardin (2001), Le Salon (2004), and Sous Sol (2007) presented a voyeuristic look into intimate spaces: a garden, a salon, a basement. In these dance theatre works of hyper realist visuals, Chekhovian nightmares unfold in which performers of all ages tumble, jump, and walk on one another as they. Where the early work exposed the dramas and brooding intrigues behind closed doors, the characters in this work seek out the open spaces to expose their personal isolation.

The anywhere of 32 rue Vandenbranden

On a stage covered with snow, set against a broad cloudy sky, a number of shanty caravans nestle in the snow peaks. The title, 32 rue Vandenbranden, suggests that this setting could just as easily be a side street in Brussels as an address in the American small hillside town of Twin Peaks (1990-1991), to which this episodic horror story refers.

The sense of mystery and intrigue, perversity, and social dysfunction are established in the opening scene. A crying baby, discernible to those in the front rows as having the head of an old man and the tiny limbs of a new born, has been left outside in the snow. Surreptitiously, a heavily pregnant woman covers the baby with snow and pushes it out of earshot under a caravan. The brutal act, absurdly funny and irreverent at once, sets the tone. We will be exposed to things we shouldn’t see and invited to begin a sleuth’s tour of a surrealist horror story. Our “peeping tom” status is accentuated by a view inside a brightly lit caravan where the performer and singer Euridike de Beul sits naked, her long gray locks combed by the pregnant Marie Gyselbrecht, also town whore and baby burier.

In another window, a man manipulates his adoring wife. Our seeing into the private spaces will not give us more access to the mysteries, however, as explanations are only vaguely suggested in the collection of tragicomic scenes and absurdist moments that follow. Two Beckettesque Asian travelers appear with a slapstick movement sequence between the caravans. Only moments later they are suckling on the breast of the Grandmother figure (de Beul), as if their outsider status enabled them to fit perfectly in this community of lost souls.

In this tilted universe on the mountain top, the common logic of time and gravity distorts. Two dancers are blown horizontal by the sound of the wind and the Grandmother, ousted from the village, reappears with a stuffed owl on a rooftop singing Pink Floyd’s “Shine on You Crazy Diamond.”

One of the travelers, Seoljin Kim, in love but rejected by the pregnant whore/mother, materializes into a dying old man, virtually disintegrating on the spot where the baby disappeared. What plays out in this interdisciplinary work, in which dance, text, sound, and imagery are each momentarily and exquisitely highlighted, is an episodic drama in which the suggested narratives never quite crystallize, but rather evaporate into bleak despair.

As the new Flemish Wave subsides, it makes me wonder if the makers of 32 rue Vandenbranden might have done better to follow their predecessors, whose trust in the audience left room to construe the symbolism and metaphors implicit in the dance, image, and sound to their own narrative.