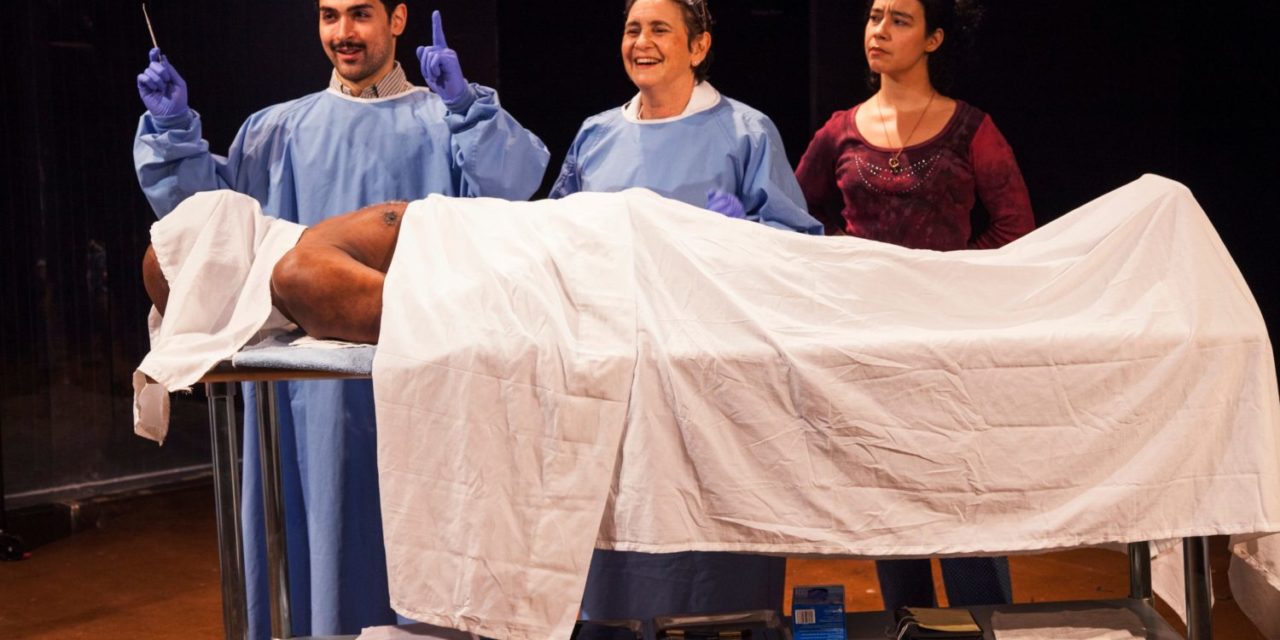 It could be old Mrs. Dabrowski, laid to rest. It might also be a Syrian refugee, a former member of “TQILA” (pronounced tequila), the queer unit of the international Revolutionary People’s Guerrilla Force, hiding beneath the coffin’s hermetically sealed lid, ready to be smuggled across the Buffalo border to that promised land, Canada. It could be a refugee from El Salvador, hiding from lurking ICE agents in a darkly comedic gesture, or maybe, dead inside, is a country we used to know.

Audiences of City Of No Illusions, Talking Band’s newest production staged at LaMaMa Experimental Theatre Club, may have asked themselves that same question, sat inside the musty, retro interior of funeral homes everywhere. The mellow sounds of some old Wulitzer organ in the air, fake plastic plants, and roses that aren’t romantic. You know the smell.

In truth, “passage” is what director, playwright and Talking Band co-founder Paul Zimet has contemplated in City Of No Illusions, a political comedy that stages the modern refugee crisis in a funeral home. Fitting he’s set his meditation here, itself a place of deathly transience — the morbid irony surely intended — and a honky, twisted funhouse of life and death in the basement of LaMaMa’s East Village theater.

Inside is funeral director Trina (Colleen O’Neill) and her twin sister Angie (Ellen Maddow), trained in the family business and passionate about their own humanitarian project: giving work and asylum to refugees, to those in the midst of their own living passage. Employed there is a Syrian refugee, Saad, (played by Syrian born, Eden Zane), hired to embalm bodies in the basement and a Salvadoran immigrant with expiring papers named Gabriela (Veraalba Santa), sometimes a corpse cosmetologist. There’s Trina’s husband Daryl (Jack Wetherall), a Trumpian snake oil salesman determined to make a few bucks off his wife’s business and, at the door, a pair of Immigration and Customs Enforcement (ICE) agents who’ve come to investigate.

Hiding in the shadows is a trio of clandestine musicians, a “shadow band” as they’re called, who seem to exist neither here nor there, neither among the living nor the dead, and who fill the parlor with foreboding songs of reckoning to come (music by Ellen Maddow), their presence a musical nod to the fuzzy boundaries of life and place City Of No Illusions occupies.

And if all of that sounds primed for a jumbled and absurd fusion of character and plot — you’d be right. As enchanting as the shadow band’s music is, what purpose they serve on the stage, their cryptic lyrics confounding an already wonky plot, is unclear. That the funeral home itself teeters between the living and the dead, its passageways home to visitors like Gabriela’s dead mother (Annie Henk), is probably an over-played meditation on transiency in a play that’s really about refugees. And Zimet’s presentational staging, basic and uninspiring, contrasts badly with the mythical goings on at this mortuary.
But the impulse to set a meditation on the refugee crisis inside a funeral home — literally teetering on the border between life and death; on the literal border, too, set in Buffalo, New York — is a creative one, however obvious the metaphor.

A common refrain sung by the “shadow band” is that of the traveler at the door — a stranger wanders through a house which is not mine or theirs. Who could it be? Mythical wisdom tells us never to turn them away; they could be God. Sit her by the fire, they sing.

One might imagine that a funeral director has a special relationship to this spiritual sagacity; those that arrive at their door are not God but on their way to that maker. And the thought that a global refugee and immigration crisis might, in a similar way, resonate with the Undertaker is an admirably original one, the funeral home no longer a deathly purgatory, but a vital passageway to new life. 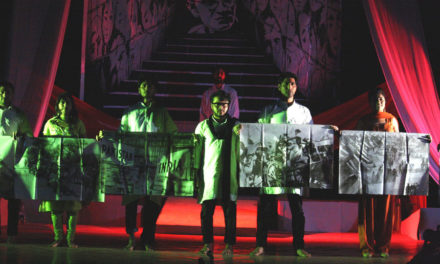