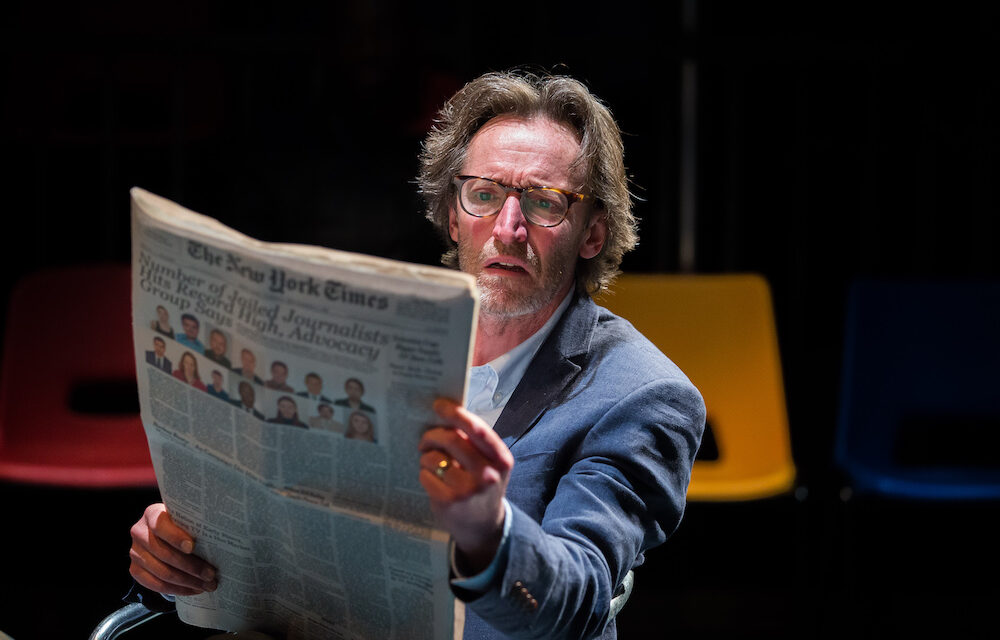 Truth is the first casualty of war, and often it is journalists who have to pay the price. Killing the messenger seems to be an accepted way of falsifying the facts—and this applies to any situation affecting state power. This adaptation by Pippa Hill and Sophie Ivatts of Turkish Cumhuriyet newspaper editor Can Dündar’s memoir, #WeAreArrested, is the latest example of attempts by oppressive regimes to silence their critics. Dündar was imprisoned in November 2015 in Silivri prison for publishing video images of state intelligence involvement in arming Islamist militants in Syria.

During 92 days of solitary confinement, Dündar wrote the story, which he describes as the product of collective solidarity. After running the story in his newspaper, he and his team defied the dictatorial regime of Recep Tayyip Erdoğan, although he went immediately abroad to avoid arrest. But he soon came back because he didn’t want his colleagues to face penalties by themselves. This collective resistance worked well while the government had no majority in parliament, but the situation became much more serious after Erdoğan was re-elected with in a massive landslide. The first thing that government then did was to go after their journalist critics.

So Dündar is arrested, and outrageously charged with the crimes of espionage and supporting a terrorist organization. He is thrown into prison. Using Feyza Howell’s English translation, Hill and Ivatts (who directs the show in a co-production between the Royal Shakespeare Company and the Arcola) tell this tale at breakneck speed. In a 75-minute narrative, spoken as a monologue by Dündar with some interjections, comments and brief dialogues by two other actors who play his wife, his son, colleagues, prosecutors and so on, the conditions of solitary confinement are outlined and the details of his case broadly sketched out. However chilling, the story is both humorous and humane. It is also an existential tale.

Early on, Dündar says that he feels like Franz Kafka’s Joseph K, and clearly he is caught up in a Kafkaesque nightmare. In this universe of unreason all the charges against him are grossly illogical and exaggerated. They are crazy; they have no foundation in truth; there is no evidence. So he becomes the one sane voice in an absurd story where the enemy is not only the power of the state, but also the forces of darkness. Hence a deep sleep of reason which spawns the terrorism of the Erdoğan regime, including political assassination. This attitude makes for some vivid writing, which is however slightly problematic: how do you defeat an existential enemy?

Dündar tackles the question of surviving imprisonment by acting on the paradox that “the imagination, when it meets a wall, can soar”. Although he shows how the routine of incarceration affects the minds of prisoners, he also illustrates how a strong will can create imaginary acts of resistance. In Ivatts’s excellent production, this is represented by a series of magic acts: a napkin blooms into a rose; a tasty breakfast materializes from nowhere. Drabness turns into color. Magic. Sleight of hand consultant John Bulleid has made a great contribution. In another sequence, the pop magic of Adele’s “Hello” is used to show how the imagination can be free even when the body is shackled. By contrast, political power is depicted not only as vilely monstrous, but also as ineptly stupid.

#WeAreArrested has plenty to say about the idiocy of those in power. While all local references to Turkey have been removed, with more general names such as “the president” being substituted for those of familiar political leaders, it is clear that the theme of the play is power, generally as well as specifically. The central message is that the more the state persecutes you, the more publicity you get. In Dündar’s case the hysterical reaction of the authorities to his journalism resulted in massive publicity for him at home—and abroad. If those in power had been even slightly more intelligent they would have ignored his articles and we would never have heard of him. All power is stupid, but absolutist power is absolutely idiotic.

At one point, an even broader theme is announced when Dündar quotes George Orwell in an effort to keep up his flagging spirits: “In a time of universal deceit telling the truth is a revolutionary act.” It’s one of those phrases that now sounds rather banal, but under a dictatorial government it suddenly springs into voluble life. Watching this show during a general election in Britain, when evidence of lies and deceit by the government is daily on view, quite openly, it is a sober realization to think that these kinds of banalities once again have a considerable force. Telling the truth in a post-truth age, in which so-called alternative facts are deliberately sown everywhere, is surely a renewed imperative.

The show has other great examples of how simple gestures of opposition can have a huge impact. As various journalists languish in prison, their colleagues organize a wooden-chair vigil. A vigil of hope. They place a simple household chair outside the prison and take turns at sitting there in protest: it’s a wonderfully simple idea. Likewise, Dündar’s colleagues decide to hold an editorial meeting outside the prison gates. A great gesture. It’s non-violent so that anyone can do it, and therefore it’s democratic, inclusive; most importantly, it generates international publicity. In terms of protest, symbols are vital—the wooden chair proves to be stronger than the gilded throne.

There’s a lot to enjoy in this play. Peter Hamilton Dyer plays Dündar with calm reasonableness, although the most gripping moments are those when he loses his temper or becomes emotionally frustrated. His narration is clear and concise; he embodies the heart of this story. Indra Ové and Jamie Cameron play all the other roles, switching effortlessly between different characters and different moods. Charlie Cridlan’s set features three white tables, which are covered with cut-out words, a reminder of the power of the apt phrase. Although #WeAreArrested doesn’t really challenge the views of liberal audiences, it does deliver theatrical and political pleasure.

#WeAreArrested is at the Arcola Theatre until December 7.