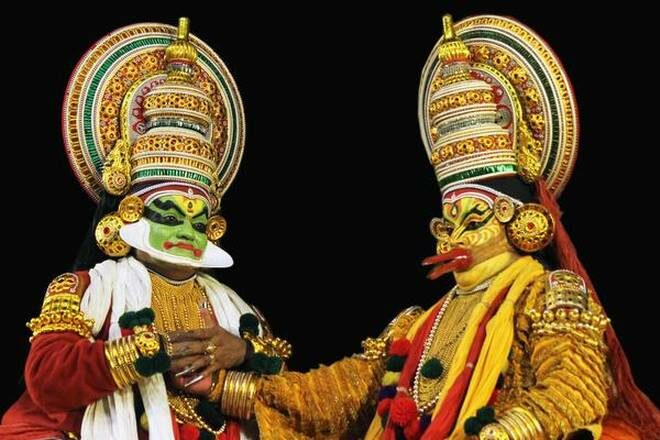 Kathakali buffs were able to familiarise themselves with rarely-presented characters and anecdotes of Nalacharitham and Duryodhanavadham during a five-day fête in Thrissur.

A five-day festival of Kathakali in Thrissur became memorable due to the presentation of unabridged performances of Nalacharitham and Duryodhanavadham. No libretto, character or scene from the original texts was left out in the two plays.

Around 150 artistes, including actors, musicians, percussionists and ‘chutti’ artistes, worked almost round the clock to make Natyanaishadham, as the festival was called, a success. This included a few amateurs as well.

Usually, only select scenes of Nalacharitham, Unnayi Warrier’s magnum opus, are staged. But rasikas who thronged Regional Theatre on all the days could watch the four-day play in full and familiarise themselves with rarely-presented characters and anecdotes. Staging of preliminaries such as keli, purappad, thodayam and melappadam on different days made the event a holistic one.

Kalamandalam Krishnakumar’s portrayal of Nala on the first day was commendable. Kalanilayam Gopinath donned the role of Hamsam. Perhaps, more appealing was the performance of Kalamandalam Shanmughadas as Nala in the latter part, which is rarely presented. His abhinaya demonstrated the character’s agony and ecstasy as he arrives for the Swayamvaram. 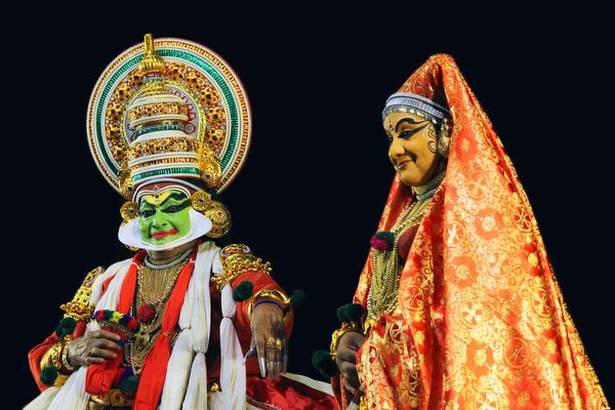 Kalamandalam Gopi as Nalan and Margi Vijayakumar as Damayanthi in Nalacharitham Day II at ‘Natyanaishadham’ Kathakali Festival in Thrissur. Photo courtesy of Thehindu.com

In the first half of the second day, Kalamandalam Gopi (Nala) and Margi Vijayakumar (Damayanthi) captivated the audience with their characters. Gopi has become synonymous with the character of Nala. Though the feet movements of the octogenarian actor appeared to have mellowed during the kalasams, the subtle movements of his body and articulate mudras spoke for his incomparable artistry. Kottakkal Devadas’ Kali was noted for propriety as he completed the role in less than 40 minutes.

The originality of Kalamandalam Sreekumar’s Nala is worth mentioning. Sadanam Sadanandan portrayed Damayanthi and Kalamandalam Soman’s hunter did not overdo his role. True, the dialogues by other characters in the latter part of the day’s play provided a touch of theatre. Sarthavahakan, donned by young actor Kalamandalam Arun Raju, was noteworthy.

The third day witnessed Kalamandalam Vaikom Prasanth’s Nala wandering in the forests, haunted by thoughts of his predicament. Rarely seen on the stages in this area, Prasanth’s performance could be described as precise. Kalamandalam Subramanian once again proved that innovation is his strength and this was evident in the depiction of Bahukan.

Peesappilly Rajeevan effectively interpreted the strength and humor of the character of Sudevan. Kalamandalam Praveen’s Rituparnan marked the opening of the fourth day. Though not presented generally, one could realize the inevitability of the character for the sake of continuity of the story. Kalamandalam Chambakkara Vijayakumar’s Damayanthi and Kalamandalam Mayyanad Rajeevan’s Nala were outstanding. Veteran actor Sadanam Krishnankutty portrayed Bahukan in the right proportion with his creativity.

What made the staging of Nalacharitham a singular event was the analytical study of the play presented by experts on each day.

Duryodhanavadham included Karnasapatham. But one wonders how it could be clubbed with Nalacharitam as the title of the festival, ‘Natyanaishadham’, was relevant only to the story of Nala.

This article was originally posted at Thehindu.com and has been reposted with permission. To read the original article, click here.