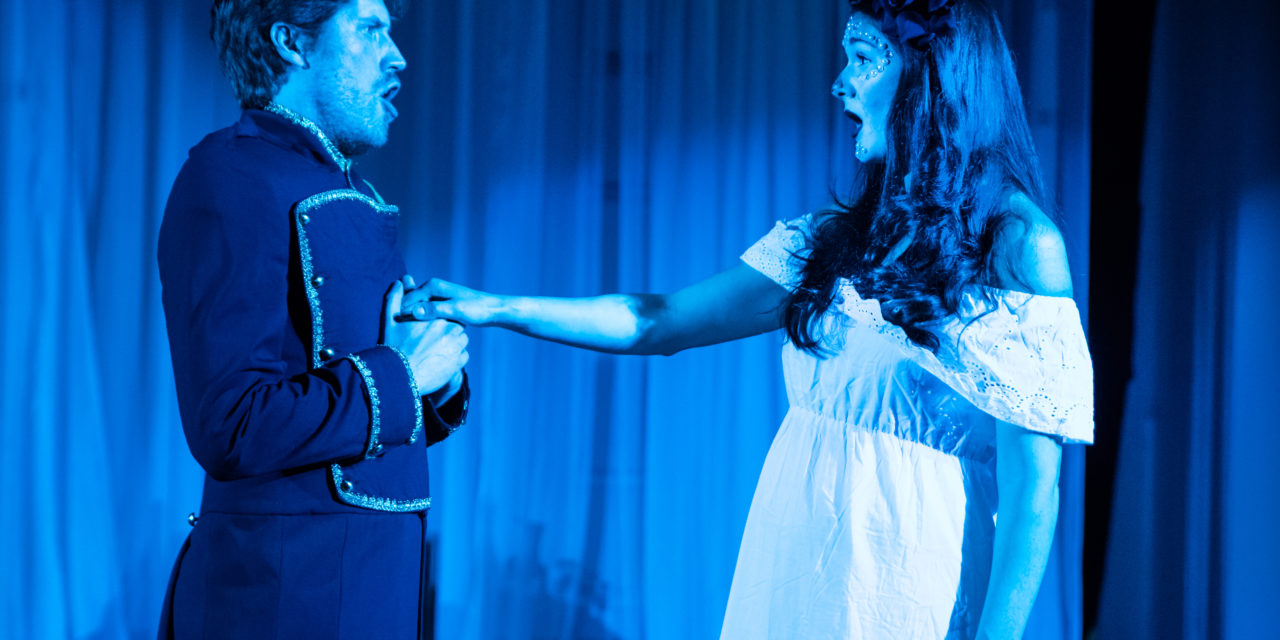 The Cambridge Chamber Ensemble debuted their reimagined production of Pauline Viardot-Garcia’s hidden gem Cendrillon at Warehouse XI in Union Square Friday night to a full house. In only its second season, the Cambridge Chamber Ensemble is committed to presenting underperformed works that deserve attention. Pauline Viardot-Garcia’s chamber operetta was an excellent choice. Delivering on this promise to celebrate little-known artists, only the composer’s bio was included in the program. A brilliant female composer, Viardot-Garcia premiered Cendrillon at the age of 83 and her work is only now being rediscovered after over a century. The salon opera with a cast of seven and piano orchestration was well matched for an intimate space and a small ensemble. While showcasing enormous vocal talent, the performers were a touch misguided by well-intentioned but altogether insensitive direction.

Director Alexandra Dietrich’s vision exchanges early 20th century France for newly independent Mexico during the celebration of el Día de Los Muertos. This concept and the English translation from the original French are aligned with the Ensemble’s mission of inclusion and outreach. However, the follow-through left something to be desired. With white actors playing the leads and the only two Latino actors playing servant roles, the casting was problematic for this particular reimaging of an age-old tale. With a history lesson from executive director Martha Birnbaum in lieu of program notes, the viewer was left on their own to decipher the purpose of appropriating this cultural holiday for this retelling.

Viardot-Garcia’s rendition of this classic story is a lighthearted one, with a kooky fairy godmother, ditzy stepsisters, and bumbling servants. The fairy tale unfolds as the viewer expects: Cendrillon (Kathryn McKellar) meets Prince Charming (Jeremy Ayres Fisher) dressed as a beggar and receives an invitation to the ball at his palace but is unable to attend without the help of her fairy Godmother (Gyuyeon Shim.) A trick with a missing glass slipper and the search for its owner rounds off this familiar love story. Marketing Cendrillon as a “savvy señorita,” it was disappointing to see a message of feminine inferiority without the love of a royal in this reimagining.  In this sense, this production promised more than it delivered. 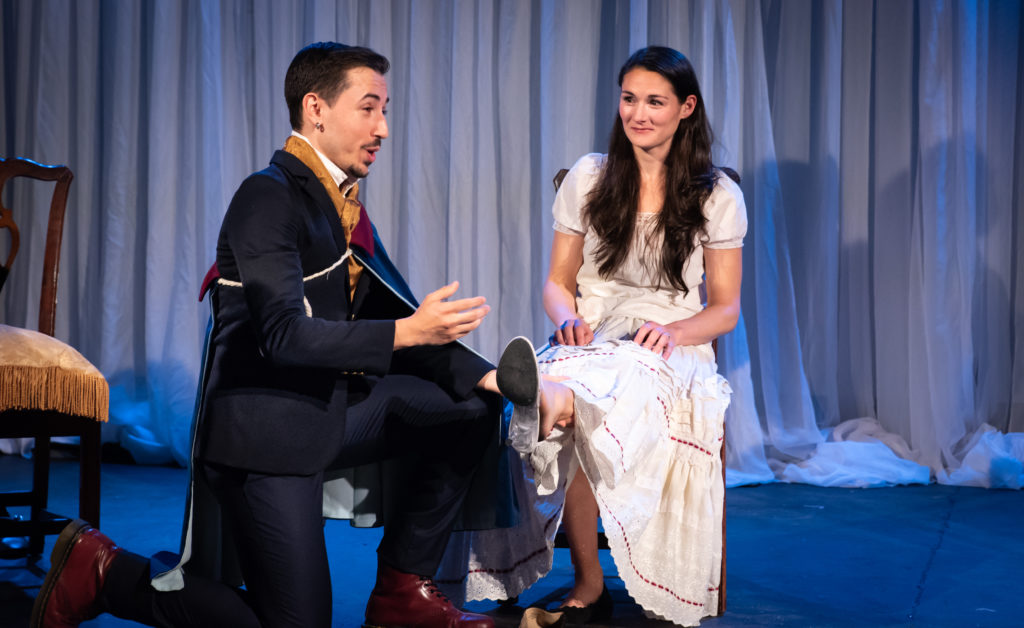 The inclusion of the hysterically overconfident valet, Comte Barigoule played with decadent indulgence by Fran Daniel Laucerica, is what rescues this story. Switching places with the prince for the night, Laucerica had fun with the character and elevated the performances of his costars. Tackling runs in a clear tenor, Laucerica also engaged in entertaining physical comedy with Brian Gonzalez, the Prince’s footman. He leaned into the character effectively, garnering the first applause of the night at the top of Act II.

No Cinderella story would be complete without the evil stepsisters, and Stephanie Hollenberg and Jaime Hartzell brought vivacity and humor to their roles as Maguelonne and Armelinde, respectively. Though Hartzell was sometimes lost in the trio, their voices and performances were a delight. Junhan Choi lent his prodigious baritone to the role of the Baron de Pictordu, the rich timbre of his voice blended perfectly with musical agility, a good counter to at times awkward line delivery. While often speaking Spanish, English, and French all in one breath, the lyrics were often lost in the reverberant space and did not always sit well in the middle and lower registers of the performers.

Kathryn McKellar approached the iconic titular character with timidity yet a certain sweetness, her solo arias filling the space with a soaring tessitura but completely overpowered when with the stepsisters and in duet with Fisher’s booming tenor. Fisher’s Prince Charming was a caricature in the first act and an odd match to McKellar’s more sincere Cendrillon. When he completely changes his characterization in the second and third acts to a lovesick wanderer, there appears to be some incongruity between the lovers and the rest of the cast, who maintained slightly tongue-in-cheek performances to uncertain chuckles from the audience. 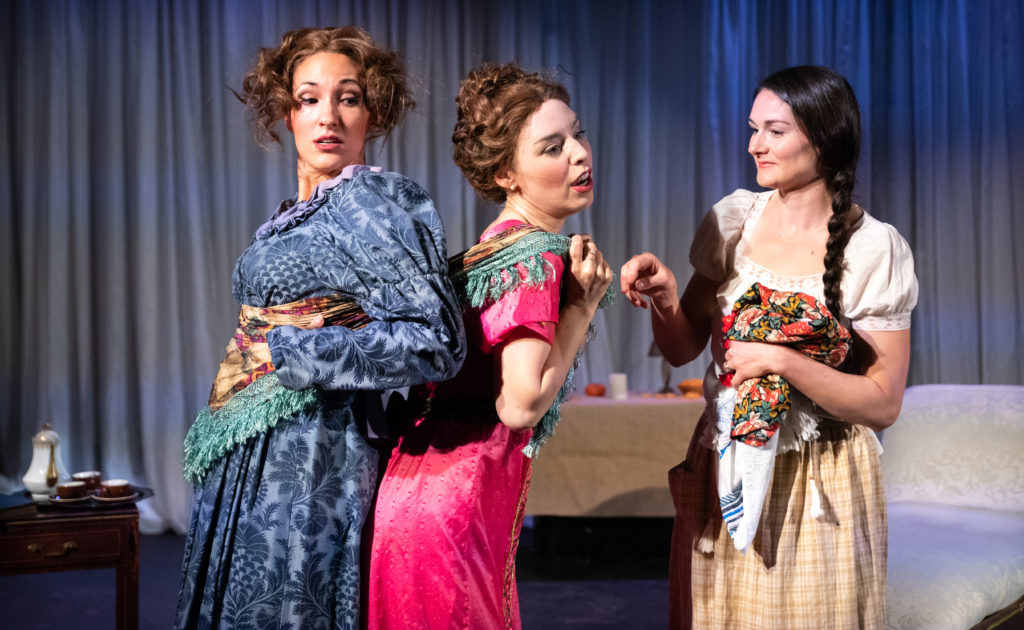 The costumes were more reminiscent of Seville rather than Mexico and apart from what could have been a small ofrenda, the production design did little to transport us to this place and time.  A puzzling projection of a golden sparkling light appeared on the white chiffon backdrop during the transformation before the ball and was underutilized in portraying something magical without illustrious technical effects. The lighting was otherwise effective as dusk set at the ball and the single spot announcing the arrival of the fairy godmother as she appeared in the back corner of the space. Gyuyeon Shim was the shining star of the production, her remarkably clear soprano cutting beautifully in the chorus pieces and the control of her upper register perfect for La Fée’s difficult arias. With her face painted with the calavera form, she is meant to be understood as Cendrillon’s dead mother, though Shim favors bubbly youth over maternal grace. The mask was also appropriated by Cendrillon as part of her ball ensemble and was no less problematic and incoherent.

The Cambridge Chamber Ensemble’s production of Cendrillon has a cast of talented young musicians who require more attentive acting direction. While certainly conceived with the best of intentions, those intentions go sour when not executed with the most socially conscious vision. Though not done with quite enough sensitivity, Cambridge Chamber Ensemble should be applauded for recognizing Viardot-Garcia’s work and striving to make opera more accessible to wider audiences.