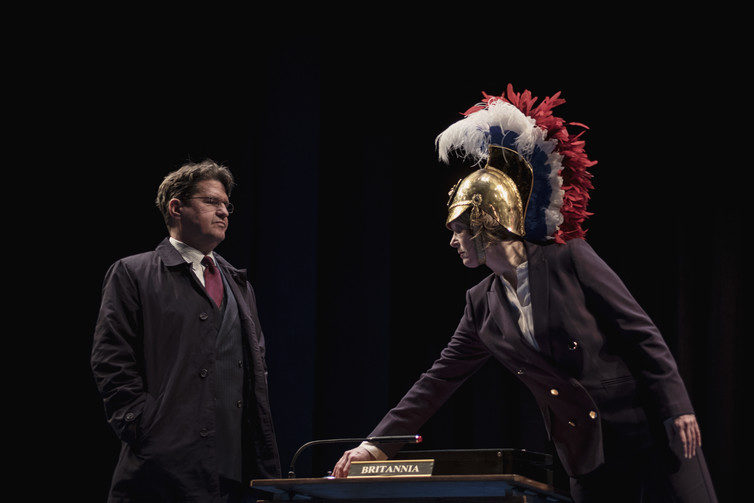 "The play, set on the night of last year’s Brexit referendum, articulates the national mood of the times through its cast of Brechtian characters" Photo Credit: Sarah Lee

Much has been written over recent months about the apparent bubble in which we are all now living, a kind of transparent hamster ball that encircles us and only serves to substantiate, endorse and inwardly broadcast a set of assumptions and prejudices that we already possess thanks to the quotidian role of social media. The left talks largely to the left and the right to the right, each endorsing their respective views with data sets and human narratives that operate at polar ends of a retweet/Facebook like/clickbait culture that both hot houses and self-perpetuates its primary concerns.

This idea has been used to explain both the Brexit phenomenon and the rise of President Trump’s version of Republicanism in the US. The feelings of “real working people” (a much-invoked moniker for a portion of the electorate that a party is seeking to bring to the ballot box) have somehow got lost in the maelstrom of an alienating political discourse that cites elitism as the problem but is itself borne out of an elite, albeit a financial rather than intellectual one.

I was reminded of the bubble syndrome while sitting at the National Theatre taking in Carol Ann Duffy’s new verbatim drama My Country, which is embarking on a national tour after a month run in London. The play, set on the night of last year’s Brexit referendum, articulates the national mood of the times through its cast of Brechtian characters who speak on behalf of their particular region or in some cases (such as the character Caledonian) for a whole nation.

Duffy and director Rufus Norris offer us a balanced set of views siphoned down from 70-plus interviews that were conducted up and down the country. But the show ultimately provides no greater sense of comprehending the national psyche than watching an episode of Question Time or listening to a radio talk show phone in. It doesn’t quite break out of any bubble. Verbatim theatre – where people’s words are transplanted to the stage in a documentary style format – can provide a powerful means of articulating contemporary concerns. Robin Soans’ Talking To Terrorists (2005), for example, was a prescient tour de force that offered real insights into the mediating role of constructive dialogue. And performances of The Colour of Justice (1999), based on the Macpherson inquiry into the police investigation of the murder of Stephen Lawrence, similarly provided a unique, proximal experience for audiences to engage in a legal, social and political process that articulated the prejudices encountered by an entire community.

Norris, artistic director of the National Theatre, should be congratulated for his attempt to capture the voices of the nation at what was a key pivotal moment in its history last year. But My Country somehow lacks the vitality of previous verbatim pieces. Interspersed speeches from politicians such as Nigel Farage and Boris Johnson feel clunkily dropped in and unnecessarily presented as embodied caricatures.

London Road (2011), Norris’s previous encounter with verbatim theatre – the unlikely coupling of musical theatre with the 2006 Ipswich serial killings – was a far more successful enterprise, managing to break new ground in terms of both form and content. Interestingly, the highlights of My Country are located in its musical set pieces, where his directorial flair and experience are most in evidence. Here, the play moves more sharply into a popular mode that melds easy accessibility with an effective experience. This comes far closer to catching the national zeitgeist than many of the interviews themselves.

In response to our bubble reality, many involved in the arts are questioning the role and function of their practices as their own hamster balls have come sharply into focus. For Norris, part of the answer seems to be verbatim theatre: representing the voices of the public on stage.

Scrutinizing the output of a national theatre at a time of rising nationalism is certainly a worthwhile activity. Guardian theatre critic Michael Billington recently took Norris to task for almost entirely rejecting the classic repertoire in his desire to promote new work. This severance with the past is dangerous, he argues: “We also see all around us the danger of living in a perpetual present.”

In a similar vein, one might also be tempted to read playwright David Hare’s attack on the apparent influx of European directing styles on British theatre as part of a broader move of the theatrical establishment to shore up a sense of nationalism through the active promotion of a kind of cultural homogeneity. Does theatre, as one of our biggest cultural assets, deserve to be bordered and sheltered from foreign influences and distractions?

Ironically perhaps, My Country attempts to deliver the kind of state-of-the-nation play that Hare continues to hanker for. But the nation is not fixed and static. It is a dynamic entity that is currently deeply divided. While Duffy’s play is less concerned with exposing the friction engendered by these divisions, she does facilitate a multitude of voices that speak to a united moment that was anything but unifying.

The facilitation, however, feels ultimately flimsy and lacking in either radical intention or emotional insight. For a National Theatre that is seeking to probe the current nation’s psychological state of the mind, there needs to be more. And so two questions for the National remain unanswered. What might an appropriate theatrical response to our times be? And how can we make such a response relevant for all?

This article was originally posted on http://www.theconversation.com. Reposted with permission. Read the original here.