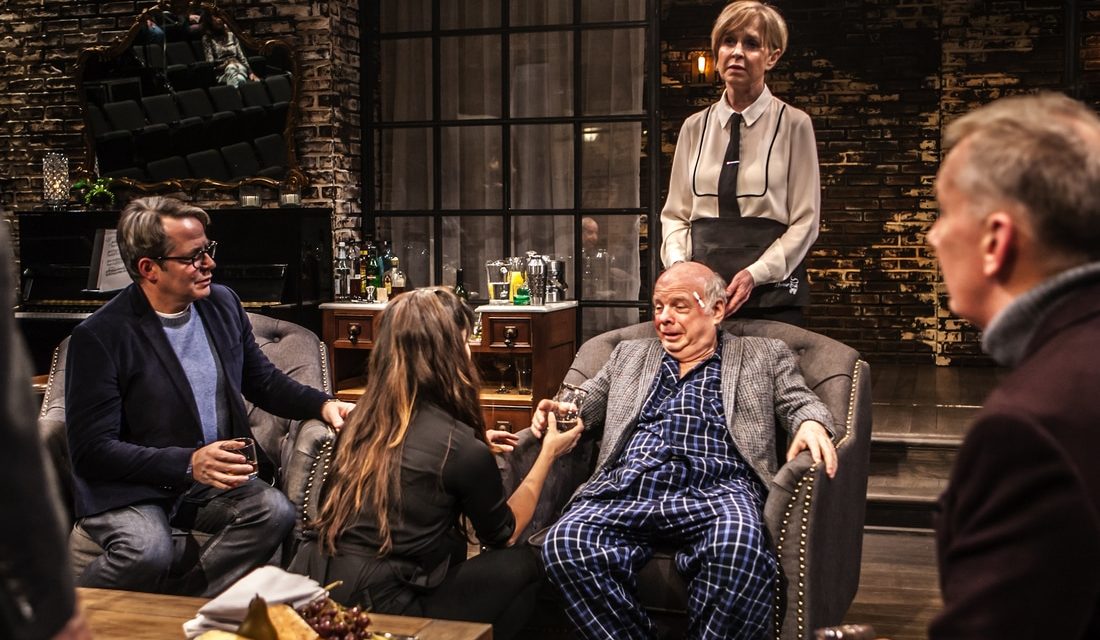 As goes the theater, so goes civilization. In Wallace Shawn’s Evening at the Talk House the demise of this communal art form is imagined as symptom or cause (or both) of a decadent society’s descent into atomization and barbarism.

Talk House takes place in the once-tony private club of the play’s title, a favorite haunt of theater folk back when that endangered species roamed free. A group of them have reunited to commemorate the ten year anniversary of a production they worked on together, a highlight in many of their lives. The fortunes of those assembled have risen and fallen unevenly in the ensuing years, but they quickly settle back into familiar habits, trading showbiz snark and memories of the good old days. There is some perfunctory talk about politics, and while certain irregular details, such as the fact that elections are now held every few months though one of the same two candidates always wins, may cause us to prick up our ears, they are not treated as cause for alarm.

Portents of darker developments emerge when the conversation turns to how these erstwhile artists have been scraping together a living now that the theater no longer keeps them in Scotch and hors d’oeuvres. The playwright Robert (Matthew Broderick) and leading man Tom (Larry Pine) have found a measure of success working in television, while the composer Ted (John Epperson) and costume designer Annette (Claudia Shear) eventually admit that they have had to take on some freelance work doing “targeting” for the government to supplement their more meager incomes.

“Targeting,” Annette insists repeatedly, is “a very simple mechanical process,” that happens to involve identifying individuals destined for elimination under the state “murder program.” While everyone is aware of the existence of this program, those whose financial circumstances have insulated them from its practical operations are rather shocked to discover that their friends are involved in such things. Annette defends her work and the regular paycheck it guarantees. “I study lists of people and decide who has to be killed,” she explains. “Like half the people I know,” Ted adds. The murder program might be distasteful, and is for that reason handled secretly, but it is a necessary evil. Annette likens “dropping some bombs onto some people” to politely excusing oneself from a meal and “dropping some waste into a toilet.” It isn’t the done thing to raise such topics in mixed company, but no one denies that they are a part of life.

That this all remains fairly abstract for most people is of course what makes it possible for the program to exist, but the specter solidifies when formerly beloved actor Dick (Wallace Shawn) unexpectedly intrudes on their little party sporting a badly bruised face. He has been beaten by his “friends,” a warning issued for expressing unspecified objectionable opinions, and the gossip he has to contribute has to do with mutual acquaintances who have recently dropped dead at dinner, their drinks poisoned by friends in another offshoot of the murder program. Before the Evening at the Talk House is out, another life will be claimed in this manner.

How have things reached this point? Where is the resistance? Tom, who hobnobs with the most powerful politicians in the country describes them all as very “nice.” The other guests are only concerned with their own comfort and safety, and of course television ratings. When Jane (Annapurna Sriram), a young waitress, shares that she spent time in Nigeria doing some of the murder program’s actual murdering, it is remarked that Robert’s show isn’t at all successful in Nigeria, and the conversation turns to regional tastes in frothy prime time offerings. In private, Jane tearfully confesses to Robert that after her experiences abroad all she can think about is wanting to die. He leeringly reminds her that they once had a sexual relationship in an attempt to cheer her up that only reinforces her desperate sense of loneliness.

In an introductory soliloquy Robert owns that he does not really miss the theater, which after all is nothing more than “a small group of humans staring at another small group of humans.” This reductive but not entirely inaccurate definition sums up much of what is challenging about the theater, what makes it both vital and easily dismissed. It is most often a small-scale operation with a tiny reach compared with film and television. It asks for the sort of sustained and intense attention that makes intimacy possible. It insists on singularity—that of a character trapped in a particular set of circumstances, a director’s idiosyncratic way with time and space, or a performer whose heart was pounding a little harder on Friday than on Saturday. It also insists on community, however provisional. We make plays in groups, gather to watch them in groups. Deep knowledge of the other traverses the proscenium and the psychic space between collaborators. Annette says that she divides her life in two—life before the group’s last play together when her world was shaped by the relationships she cultivated as a theater artist, and life after. Now she sews alone in her apartment doing piecework for wealthy clients. And targeting.

Shawn is not so starry-eyed as to believe that the theater can save us from the increasing social isolation and economic precarity that in Talk House engenders a bourgeoning underclass of contract killers. On the contrary, he is perhaps the most cynical American playwright working today, and also perhaps the most important. He specializes in splattering the tastefully-appointed habitats of the haute bourgeois with blood, making rudely visible the violence undergirding the broad-mindedness, compassion, and refinement cherished by the likes of us east coast liberal elites. Shawn suggests that we are directly responsible for the human waste and wasted human lives we produce when we value a certain lifestyle more than the people who must be exploited in order to sustain it, when we treat those faceless people living in filth and fear as disposable. Through our habits of consumption, we have produced them as surely as we have produced the waste that gets discreetly dropped into the toilet. “The life I live is irredeemably corrupt,” Shawn writes in The Fever, his most trenchant critique of capitalism, ”it has no justification.” We are all guilty. 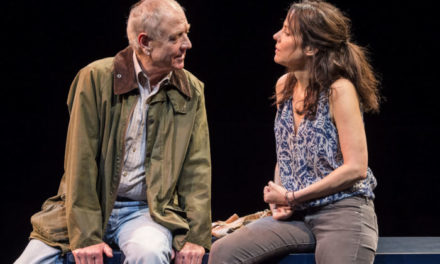