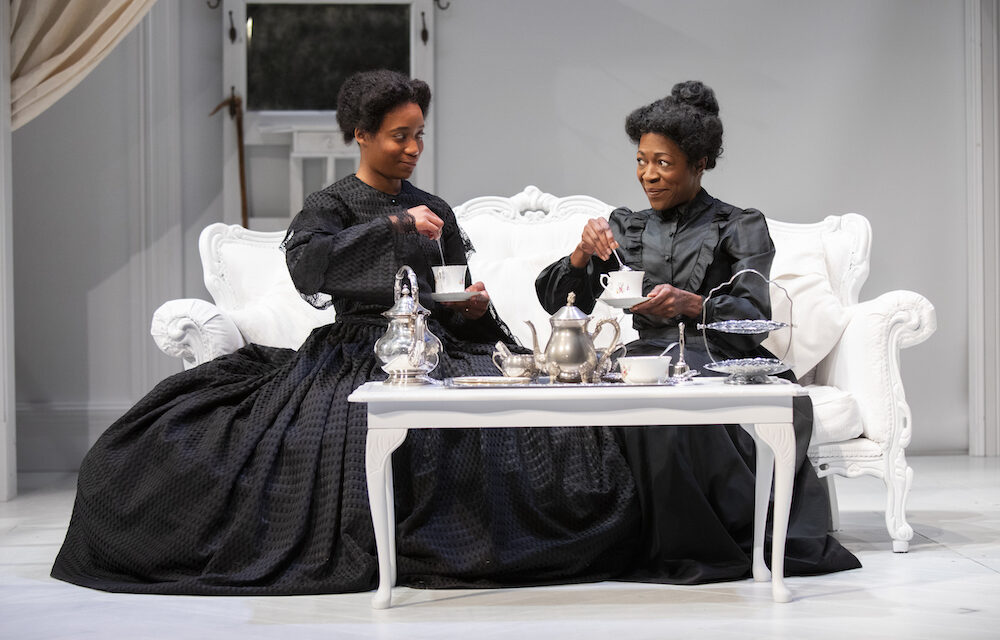 Queen Victoria is a strong symbol of the old British Empire. For some 200 years, up to the 1950s, the country’s colonial history dominated the national mindset, and arguably we still live in its shadow: after all, the Brexit idea of making Britain “great again” owes more than a little to imperial nostalgia. Bruntwood Prize-winning playwright Janice Okoh tackles this mythical symbolism in her latest play, marketed as “an outrageous play about imperialism, cross-racial adoption, cultural appropriation—and tea”. It certainly features one of the most powerful and complex discussions of race on the current British stage.

It begins with a scene that gently subverts audience expectations. Two Victorian women, dressed in crinolines and corseted, are taking tea in a well-furnished room. But they are played by black actors. One is the 19-year-old Sarah, mistress of the house, and the other is Aggie, an older servant. Sarah is teaching Aggie the genteel art of pouring tea, serving cake and sandwiches, and making polite small talk. Aggie is doing her best, but not very well. It’s a comic scene, with its posh accents and naivety, laughing as much at our ideas of class and race, as about the conventions of Victorian society. Is this an example of colorblind casting? Is this a white Victorian family being played by black actors?

The answer is no. Gradually, it emerges that this is an episode from the life of Sarah Forbes Bonetta, a West African Yoruba princess, whose parents were killed in the war and who ended up as a slave at the age of five in the court of King Ghezo in about 1848. Her original name was Omoba Aina, and she was then freed by Captain Frederick Forbes of the Royal Navy, and finally presented to Queen Victoria, who became her godmother. In Okoh’s play we see her, and her husband James, an African philanthropist, in Brighton in 1862, preparing to return to Nigeria in order to help develop the colony’s education and economy.

By focusing on this largely forgotten episode of black history, Okoh explores the idea that the “gift” can have several meanings: Sarah is given to Queen Victoria as a kind of present from one of her subjects, yet the insights she develops are also a gift to the wider society. By contrast, Harriet Waller—a white Victorian philanthropist who visits Sarah—is openly racist in her attitudes to “the natives”. Likewise, the neighbors bully the couple with threats. Sarah and James bear this aggression with dignity, and we might be fooled into thinking that our own enlightened era is free of such prejudice. Just as we might start to think in this way, Okoh subverts our expectations yet again.

Her second scene is set in present-day Cheshire. Another black couple, also called Sarah and James (she businesswoman; he university professor), have just moved in and they are visited by their white neighbors, Harriet and Ben, who bring a gift of muffins. While James talks about a historical letter he has seen, which relates to the life of Sarah Forbes Bonetta and her relationship to Princess Alice, Harriet and Ben blunder into making racist comments about the fact that their hosts have adopted a child who is not black. Their middle-class anxiety is both hilarious and excruciating: Harriet wants to appear liberal but is actually patronizing; Ben wants to be frank but is really reactionary.

This one of the most complex and powerful scenes of racial antagonism I have ever seen. Okoh follows it with a shorter final episode that is a fantasy world in which she brings Sarah Forbes Bonetta together with modern-day Sarah in a tea-time meeting with Queen Victoria. Although the playwright can’t quite resolve all the tensions of the previous two episodes, she imagines a strongly symbolic moment in which the black women confront the white Empress. Racism pervades society, now as in the past, but it is both possible and necessary to stand up to it. Even if that is easier in fantasy than in reality.

Okoh’s play has a wonderfully subversive attitude: instead of taking the easy way of just retelling Sarah Forbes Bonetta’s life story, she uses a three-scene structure that relates it to contemporary experience. By doing so, she shows how some Africans in the past and some black Britons today have internalized white culture to the point where they feel completely English, yet they are still viewed as outsiders by white Britons. Notions of national identity are exemplified by the tea-drinking, the cakes, and by the social awkwardness of the white characters. Okoh shows how black people might forget about racial issues as much as they want, but then some white person will always remind them.

In the final episode, modern-day Sarah tells her historical predecessor how racism “starts in schools”, continues at work, and that “you can’t put your finger on one thing because it’s everywhere”. She contests the myth of black inferiority and passionately advocates for change: “Let us have our history, not with Victoria as our savior but you”, Aina. It’s a great moment of psychological and imaginative resistance. In the same scene, the white Empress calls Aina-Sarah “Sally”, a reminder that the denial of black identity begins with the act of naming. And with cultural appropriation: the most excruciating moment of the previous present-day scene is when today’s Harriet attempts “dance like a black woman”.

Such embarrassing and emotionally strong moments are a reminder of how Okoh has rewritten some classic plays about race: her attitude to Harriet and Ben is a British version of Bruce Norris’s Clybourne Park and her theatrical vision of Victorian colonialism surely owes something to Caryl Churchill’s Cloud Nine. There is also a distant echo of Edward Bond’s Early Morning, a surreal play that fantasizes a lesbian relationship for Queen Victoria. But she brings to these influences her very own vigorous and energetic dialogue, as well as a deep understanding of the emotional force of rewriting history from a female perspective. The result is brilliant.

The Gift is directed by Dawn Walton and is the fourth national tour from Revolution Mix, an Eclipse Theatre project dedicated to publicizing new Black British stories. Like one of the previous plays, Black Men Walking, the production values are high. Simon Kenny’s stage design provides, in the first and last scenes especially, a vivid contrast between the dazzling white background and furnishings, and the black and dark crinolines of the characters. The whole cast is excellent, as each actor plays two characters, one from the past and one in the present. Only Shannon Hayes, as Sarah Bonetta, has one role and she inhabits it with enormous grace and warmth.

As Aggie and Sarah, Donna Berlin offers two contrasting sides of womanhood, the comically inept and the coolly perceptive, combining images of weakness and strength in equal measure. Dave Fishley’s two Jameses are both attractively well-poised and, by acute contrast, Joanna Brookes’s Waller and Queen Victoria are excellent studies in casual racism and white privilege. Rebecca Charles and Richard Teverson are especially precise as the Cheshire couple whose polite exterior barely conceals their inner prejudices. Good acting is itself a gift and serves a great playtext, which will surely soon be a contemporary classic.

The Gift is at Theatre Royal Stratford East until February 15.