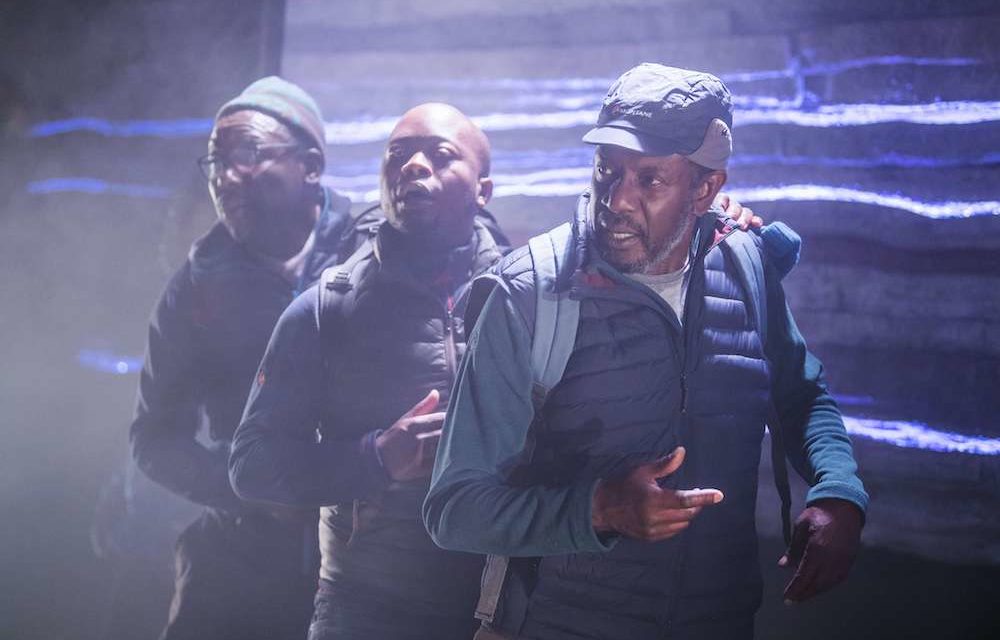 In the same week that Arinzé Kene’s Misty, a play that passionately questions the clichés of stories about black Britons (you know, gun crime, knife crime, and domestic abuse), Black Men Walking opens at the Royal Court. Having already had a successful outing in Manchester, and toured the nation, this play about a black men’s walking group is a triumphant vindication of Kene’s point that most of the stories of black Britons have nothing to do with gangs or drugs. They are about ordinary folk doing ordinary things—like going for walks. And talking about themselves. And about what home really means for them.

The first of Eclipse Theatre’s Revolution Mix program, Black Men Walking is by rapper, beatboxer and theatre-maker Testament, and is a neat mix of ritual chant, monologue, dialogue and poetic history. On the first Saturday of every month, this Yorkshire group goes walking on the moors, out in the Peak District. On this particular day in March, there are only three of them: Thomas, a Yorkshire senior with a dangerously mystical, almost suicidal, desire to be part of the ancient landscape; Matthew, a posh doctor who has broken the rules by bringing his mobile phone with him, and texts his needy white wife throughout the walk; and fortysomething Ghanaian Richard, who has a nerdish hobby interest in Star Trek.

After a ritual introduction which rings with the chant of “We walk; we walk; we walk; we walk for freedom,” the trio set off, with their weatherproof jackets, thick socks, and sturdy boots. They chat about their families and their lives. The banter is harmless and quite gentle. But there is also a political slant to their thinking. From the start, they are assertive: “Though we are written into the landscape you don’t see us. We walked England before the English.” Referring to the presence of black folk in the armies of the Roman Empire, which colonized England in the first four centuries AD, Thomas points out that they walked these lands before the Anglo-Saxons even set foot in these islands. To be black is to be part of ancient Britain.

The men also recap more recent history: the West Indian and African postwar diasporas; the racism on the football terraces in the 1970s; the culture of rap and hip-hop. But, as the weather turns more threatening, a thick fog begins to play havoc with their sense of direction and their confidence gets another blow as they bump into 19-year-old Ayeesha, a Sheffield-born rapper who—with her stories of everyday racism—provides a welcome dose of realism and skepticism. Her jokes about “black on black walking—genius” and “black Last Of The Summer Wine” are a healthy, and funny, antidote to the more mystical musings of the guys.

But although Ayeesha introduces a note of reality, especially with her monologues about unpleasant incidents in fast-food shops and department stores, the final part of this 80-minute show has an inspiring zoom of almost delirious writing, with the text taking off and the characters suddenly in danger as the weather changes. Testament’s writing is controlled and the effect is fabulously exhilarating—as the images pile up you could easily be forgiven for believing that our history can be tapped into by every one of us. Just don’t be surprised if Ayeesha might have to put you right.

Of course, being black is important to these people. For one thing, other people, white people, keep reminding them of the color of their skin. And, on the other hand, they are interested, as we all are, in where their families—and more distant ancestors—come from and what they have done. But Testament’s point is that color is not the only thing that defines these individuals, nor any other individual. I think this is exactly right. Also, by making Thomas so central to their expedition, he is implicitly arguing that this walking group is doing what Jamaican poet Louise Bennett called “colonization in reverse.” By exploring their links to that traditional symbol of Englishness, the landscape, they are asserting their right to be part of it, of its history, and of its future.

Simon Kenny’s set is a grassy strip with a clouded glass panel and a background that suggests the geological layers of rock, a visual image of the generations that have walked the land before our time. Eclipse Theatre supremo Dawn Walton directs sensitively and brings out well the show’s appealing mixture of spoken word, ritual reiteration, and snatches of song. With beguiling performances by Tyrone Huggins (Thomas), Trevor Laird (Matthew), Tonderai Munyevu (Richard), as well as the storming Dorcas Sebuyange (Ayeesha), this is a hugely enjoyable show which embraces its audience in a warm clinch, while zapping your brain with thought-provoking ideas. It’s not one of the best black plays of the year: it’s simply one of this year’s best plays.

Black Men Walking is at the Royal Court until April 7.

This article originally appeared in Aleks Sierz on March 22, 2018, and has been reposted with permission.