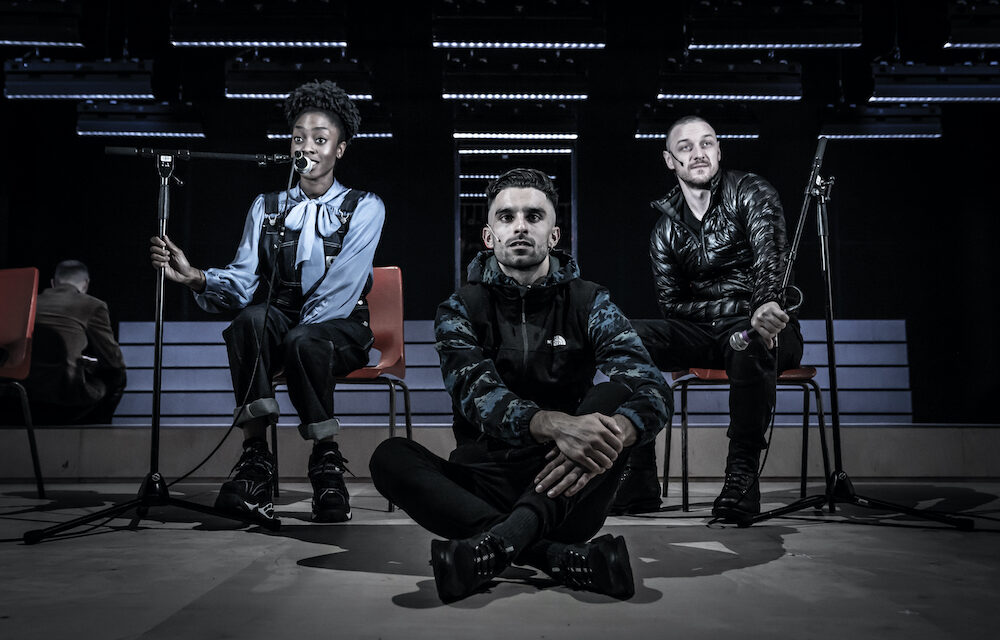 Actor James McAvoy is much in demand: in the BBC’s His Dark Materials he is busy saving a parallel world, while in the poetic universe of Edmond Rostand’s Cyrano de Bergerac he is tasked with soothing more than one aching heart. Opening at the Playhouse Theatre, in a brilliant new version by master penman Martin Crimp, this classic tale is directed by Jamie Lloyd, whose company’s revival of Harold Pinter’s Betrayal — the one starring Tom Hiddleston — has this year wowed both West End and Broadway. This time, McAvoy comes up with a breathtaking career-best performance, and the entire evening is a dazzling triumph.

Set in 1640, the story is familiar from films such as Fred Schepisi’s Roxanne, which starred Steve Martin, and Jean-Paul Rappeneau’s Cyrano de Bergerac, featuring Gérard Depardieu. Cyrano, the soldier-poet, falls in love with his cousin Roxane but is too shy to approach her because he has a huge nose and it makes him feel ugly and undesirable. When, however, she confides in him that she loves Christian, a young new recruit, a fascinating triangle develops. Christian is handsome, but not very good with words so Cyrano writes his love letters to Roxane, and coaches him in the verbal finesse of seduction. When war looms, Roxane asks Cyrano to look after the inexperienced Christian. But will he?

Here, as in the 1897 French original, this trio is not only threatened by the hazards of warfare, but by other noblemen. One especially. The powerful and arrogant Comte de Guiche, who leads the army, is also enamored of Roxane and he competes for her attention. In the cruel atmosphere of Cardinal Richelieu’s France, with its absolutist power, codes of honor and duels, the course of true love can rarely run smooth. In Crimp’s marvelously faithful and sublimely written adaptation, the verses of Rostand’s original are brilliantly reminted. Using a rich texture of rhyming schemes, with passages ranging from urban rap to poetic arias, he blends high and low culture with his own satirical viewpoint.

Laughs come thick and fast in the bold opening, in which Cyrano interrupts a stage play — in this case, a hilariously muddled rewrite of Hamlet — and fights a duel. As the first scenes speed by, we arrive at the classic moment when an unseen Cyrano provides the words for Christian to tell Roxane of his feelings, and she thinks her handsome lover is a poetic genius as well as a good-looking guy. At this point, Crimp’s bravura text takes flight in a wonderfully warm passage of love talk. As the relationship between the three of them grows, the playwright underlines the fact that, although she is unaware of it, Roxane loves two different men at the same time, while Cyrano and Christian are also imagined as two sides of the same human being. In an age when the acceptance of gender fluidity is almost banal, Crimp explores a much deeper sense of the duality of love.

The playwright is greatly helped by Jamie Lloyd’s modern-dress production, which is a triumph from start to finish. Using a bare white cube of an empty set, designed by Soutra Gilmour, with mics, microphone stands, and cables as the main props, along with a slogan painted on the backdrop, Lloyd focuses everything on the actors. McAvoy, who is on stage for most of the nearly three hours of running time, is revelatory. His acting is always believable: muscular, intense and modulated. Since Lloyd has not bothered with the exaggerated proboscis usual in revivals of this play, the physically attractive McAvoy — his voice beguiling in its Scottish lilt — is free to suggest that his character’s ugliness might be just psychological. Likewise, Eben Figueiredo’s Christian looks really cool but is not just a pretty face. Attraction, this version argues, is all in the mind.

Along with a large and heartwarmingly inclusive cast, this Cyrano is distinguished not only by McAvoy’s rip-roaring performance but also by an acting style that is both detached and contemporary. Instead of the usual bland naturalism, Lloyd often positions his actors to face the audience, talking to us rather than to each other. So, for example, the famous balcony scene dispenses with a balcony, and Anita-Joy Uwajeh’s luminous Roxane hears Cyrano’s words through the mouth of Christian while the characters move along a line of orange plastic chairs, alternately facing us and facing away. Scenes such as this are thrillingly theatrical, with the staging perfectly matching the virtuosity of the writing.

Lloyd also manages perfectly the difficult transition from the comic and satiric brightness of the opening episodes, with their rap music and dance moves, to the much darker second half as war and tragedy dominate the action. Death is beautifully handled — especially in a gorgeous poem about love’s eternal sleep recited by cake shop owner Leila — with the awareness that the fading of the light leads ineluctably to never-ending darkness; at the same time, the emotional temperature rises considerably and there was, on the press night, an intense silence during an unexpected same-sex kiss. Rivals in love, who have become enemies in desire, finally discover that they are the same person.

Although the principal three actors — McAvoy, Figueiredo, and Uwajeh — tell the story to perfection, they are well supported by the rest of the cast. I really liked Tom Edden’s sinister De Guiche and Michelle Austin’s forceful Leila, and, in the big set pieces (especially the military expedition with its convincingly brawny soldiers), the whole ensemble really rock. Nothing is missing in the well-earned tragic ending, which is emotionally true and quietly devastating. You leave the theatre enriched by the superb wit of the writing, the energy, and sincerity of the performances and the supreme theatrical imagination that has put all this together. I dare you to miss it.

Cyrano de Bergerac is at the Playhouse Theatre until 29 February 2020.

This article was originally posted at Alex Sierz and has been reposted with permission. To read the original article, click here.