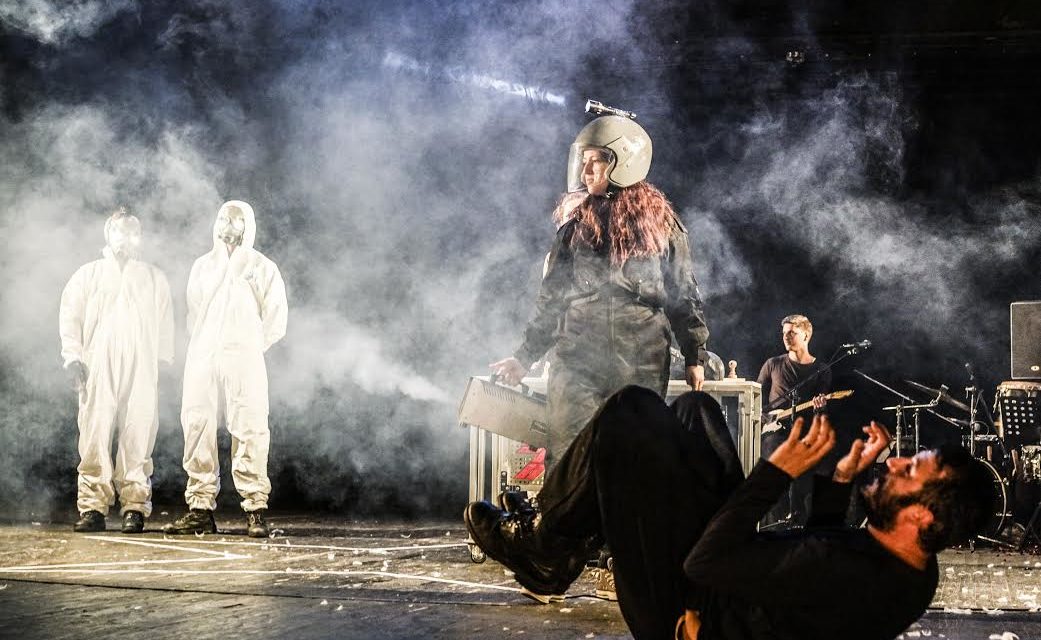 “A Play with Four Actors and Some Pigs and Some Cows and Some Horses and a Prime Minister and a Milka Cow and Some Local and International Inspectors,” directed by Blerta Neziraj and written by “A Kosovar Cynic,” is a playfully absurd, crude, and incredibly clever portrayal of Kosovo’s political scene.

Neziraj’s play, starring Shengyl Ismaili, Adrian Morina, Ernest Malazogu, and Shpetim Selmani, is a hypercurrent and hilarious depiction of events:  After Brexit, the United Kingdom’s dismaying exit from the EU, the Union is left with an empty space that must be quickly filled to avoid total collapse.

The new Balkan state of Kosovo is set to grab hold of this opportunity. But there is one problem: if Kosovo does not fulfill the EU accession requirements — contained in a document titled ‘3,000 Easy Regulations on the Way to Europe’ — quickly enough, its spot will be taken by Serbia instead. The document contains broad commandments (which are never revealed to the audience) and nitty-gritty requirements on agriculture and food production standards.

The play focuses on four actors who switch between roles of local Kosovo butchers, international and local Kosovo government inspectors, and farm animals. 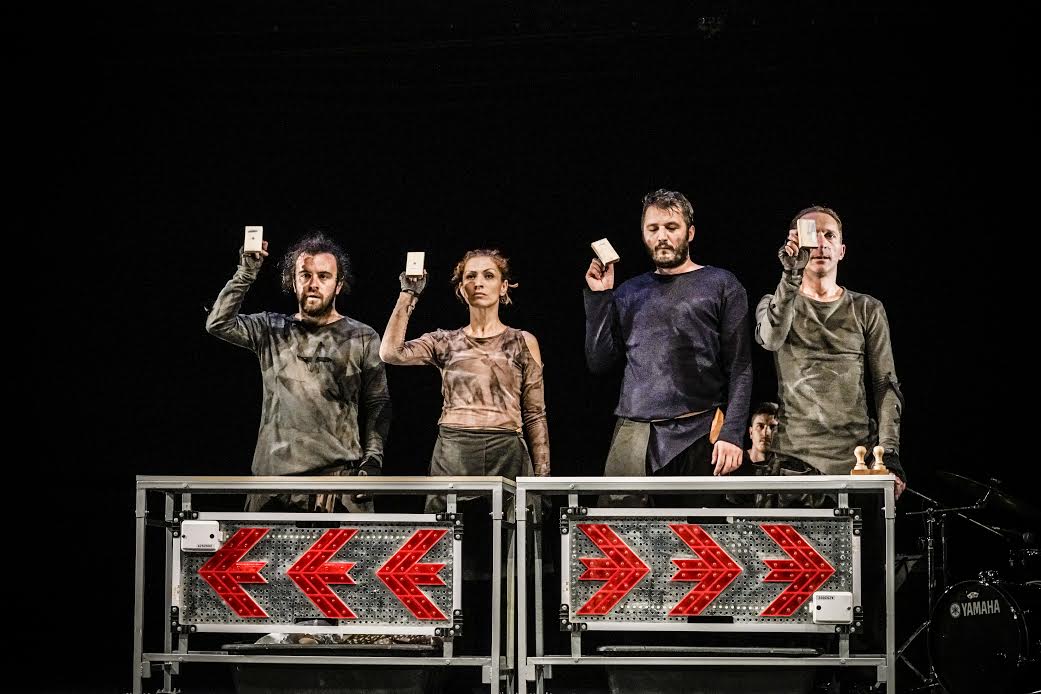 The bare-bones set and costumes allow the witty dialogue to shine. This is a classic post-dramatic theater in which no one is spared. Racy portrayals of Kosovo President Hashim Thaci, Prime Minister Isa Mustafa, members of the main opposition party Vetevendosje, international bureaucrats, and others are intended for an audience familiar with the Kosovo context. The play laughs at itself as well, with scattered jokes about performance art and postmodernism.

Ismaili and Morina, who play a married couple that owns the butcher shop serving meat from the Tony Blair Slaughterhouse, are the stars of the show. The plot centers around their journey reading through the cumbersome EU requirements and trekking through the bureaucratic process of acquiring the proper stamp to prove their meat’s quality control.

Ismaili, a housewife who is both an animal rights activist and an assistant for her husband’s butcher shop, is the only female actress on stage. The writers plays with this. Gender equality (“We fulfill the EU requirement because we slaughter even more female animals than male!”) is the main component of its political commentary.

At random points, the setting becomes an Orwellian portrayal of society as farm animals advocate for more humane slaughter practices. “Illyrian” cows dream of more freedom of movement in open pastures and attempt to present themselves as “civilized Europeans.”  In a nod to the rising Islamophobia in Western Europe, pigs brag that pork consumption is a requirement for EU accession. The butchers accept this, saying that to eat pork is a sacrifice for the Kosovar nation, and thus an act of sacrifice for Europe.

The character of the Swiss chocolate Milka cow from Locarno provides a hilarious riff on Western perceptions of Kosovo. When a Kosovar cow cries out in despair, a Swiss chocolate cow approaches her. She told him about her poor living conditions in the newly capitalist Kosovo and about her upcoming slaughter, and in turn, he becomes visibly distraught with his new knowledge about the plight of Kosovar cows.

The playful portrayal of Kosovo-Serbia relations is actually really well done. The EU-facilitated Brussels dialogue is re-imagined as a boxing match between Kosovo and Serbia, with the winner taking the coveted EU spot. Spoiler alert: Serbia wins.

The fast and deranged pacing holds attention and still gets the points across. The play makes a make a mockery out of Kosovo politics and serves as a profound commentary on political corruption, European bureaucracy and hypocrisy, and internet activism.

If the audience’s reaction to the premier at the Kosovo National Theater on Monday night is any indication, Neziraj’s work delights. Laughter filled the theater throughout the entire show, which ended with a lengthy standing ovation.

The play is accompanied by English subtitles. Tonight, the play will have its Albanian premiere in Tirana. Keep an eye on Qendra Multimedia’s website or Facebook  for an upcoming showing in Ferizaj in October and more Prishtina showings in November.

This article was originally published on PrishtinaInsight. Read the original article.