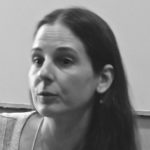 KATALIN TRENCSÉNYI is a dramaturg, researcher, and theatre-maker. Her areas of specialization are: contemporary theatre and performance, new drama development, dance dramaturgy, collaborative processes, and European director’s theatre. As a London-based freelance dramaturg, Katalin has worked with the National Theatre, the Royal Court Theatre, Deafinitely Theatre, Corali Dance Company, and Company of Angels, among others. As a theatre-maker, Katalin has worked and taught internationally: in Belgium (DANSPUNT – Out of the Toolbox Festival), Canada (Playwrights’ Workshop Montréal), Poland (Festival of New Dramaturgies), Russia (Diaghilev Festival), and the US (LMDA dance dramaturgy workshop at Gibney Dance). Katalin is co-founder of the Dramaturgs’ Network (d’n), has worked on its various committees, and from 2010 to 2012 served as its President. Currently, she is working as a member of the d’n Advisory Board. Katalin is the author of Dramaturgy In The Making. A User’s Guide For Theatre Practitioners (Bloomsbury Methuen Drama, 2015), editor of Bandoneon: Working With Pina Bausch (Oberon Books, 2016), and co-editor with Bernadette Cochrane of New Dramaturgy: International Perspectives On Theory And Practice (Bloomsbury Methuen Drama, 2014). As a visiting lecturer Katalin has taught at the University of Kent, the Guildford School of Acting (University of Guildford), Kingston University, Falmouth University, and the Royal Central School of Speech and Drama. Currently, she is working as an associate lecturer at the Royal Academy of Dramatic Art (RADA).

This post is dedicated to theatre-makers everywhere in the world [1]. In his book, Epidemics and...

As a response to the damage the Covid-19 pandemic has caused in the theatre world, the Dramaturgs’...

This article is part of the Dramaturgs’ Network’s Invisible Diaries series, and has...

This article is part of the Dramaturgs’ Network’s Invisible Diaries series, and has...

Lucy Guerin is one of the most innovative, postmodern choreographers on the contemporary dance...

The Sydney Theatre Company’s 2013 landmark staging of The Secret River to the United Kingdom was...

It was long overdue for a British audience to be given the opportunity to see another work by the...

Artificial Things [i] (directed by Sophie Fiennes) is a re-imagination of a contemporary dance...

When talking about translation, statistics show an alarming picture. The United Kingdom has the...

Mark Bly is an American dramaturg, editor, and lecturer. He was the chair of the Playwriting...