Angels (And Demons) Of History In EgoPo’s “Lydie Breeze” Trilogy 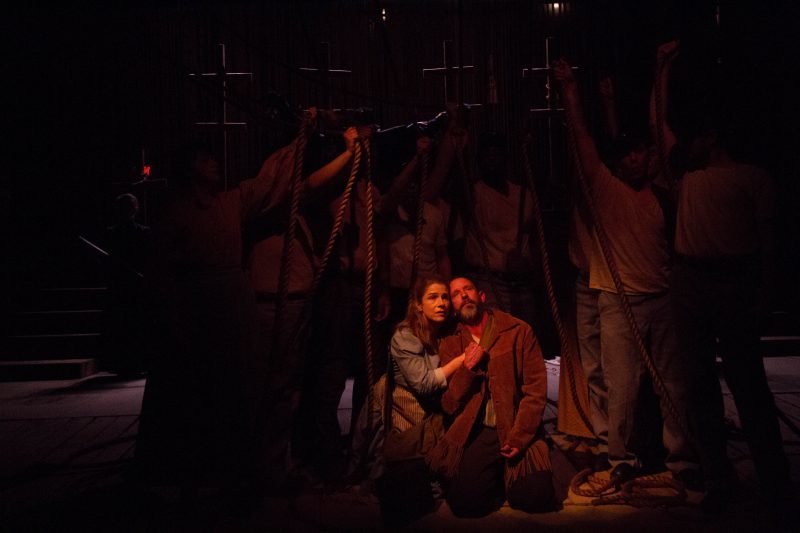 Jessica Rizzo sees the 10-hour, marathon performance of EgoPo Theater’s Lydie Breeze trilogy and says it’s worth spending the time with John Guare’s flawed Civil War-era characters, whose tragedies, loves, jealousies, and losses are humanly relatable. The sets get a shout out as bringing the action to life, as does the atmospheric music. and Guare’s vision, rooted in the past, seems oddly relevant today. The three play marathon is a monumental accomplishment, says Rizzo. The last performance is Sunday, May 6, 2018.

Philadelphia’s EgoPo Classic Theater has given John Guare’s sprawling Lydie Breeze trilogy an excellent first production as a single, marathon theatrical experience. Clocking in at ten and a half hours (with ample breaks), the trilogy spans over thirty years, following a group of friends from the waning days of the American Civil War to the brink of the new “American Century.” Like her country, Lydie Breeze’s titular heroine is both indomitable and deeply flawed; she destroys as much as she inspires, but the loyalty she commands is fierce. Director Lane Savadove masterfully balances the epic with the intimate in this sweeping story of American aspiration and self-fashioning.

In Cold Harbor, the first play of the trilogy, Lydie (Melanie Julian) is serving as a nurse for the Union Army. We meet her at the front, where she collects valuables from soldiers and pins them under her petticoat for safekeeping during battle. We learn that this daughter of a Nantucket whaler was born on her father’s ship and christened a “Cannibal Princess” by natives of the first land she saw. Fittingly then, she has grown into an insatiably bold young woman. When her nursing contingent runs out of supplies, she sets out unauthorized with Joshua (Charlie DelMarcelle), an aspiring intellectual she has just met, to trade her infantrymen’s gold trinkets for quinine and morphine. While navigating the military bureaucracy, she goes to bed with a second man, the sensualist Dan (David Girard), and earns the devotion of a third, the sweet, credulous Amos (Ed Swidey).

Cold Harbor is named for the bloody battle that brings these four together. Once the end is in sight, having made it through hell alive, Lydie convinces her comrades to return with her to Nantucket, where they will found a utopian community. Set designer Markéta Fantová is exceedingly resourceful in transforming the Christ Church Neighborhood House from a battlefield strewn with the dead and dying into a ship, an idyllic beach, a prison, and many more locations as the production requires. She integrates the space’s existing exposed brick with handsome, weathered wood, rope, and sand to launch us through time and space. Most every time we return from an intermission, the seating arrangement has been reconfigured, allowing us to experience the performers from a variety of distances and vantage points. Music Director Jay Ansill has, with Cynthia Hopkins, composed appealing original music to supplement classic nineteenth-century anthems such as Battle Hymn Of The Republic, which remains powerful enough to move even the most godless of pacifists in the audience.

Aipotu, the Utopian community, which destroys rather than uplifts

The second play, Aipotu is named for Lydie’s dreamed-of island community. Though the word is “Utopia” spelled backwards, the merry band of dreamers is considerably less merry now that their dream has become an imperfect reality. Money is scarce. Lydie is raising a child with Joshua, while yearning for Dan, who spends much of his time on the mainland working as a train conductor. Amos, meanwhile, is stuck attending to domestic duties and growing frustrated. Joshua has spent the past seven years at work on his Prolegomena to Duty, a philosophical tome that is humiliatingly rejected by the publisher for being overly indebted to “dusty” European influences. His editor exhorts him to “write like an American.” This is a blow to everyone’s spirits; Amos even reveals that he is thinking of abandoning Aipotu to attend Harvard Law School, where he has surreptitiously applied and been accepted. He just needs to scrape together the tuition. When Dan returns with a pile of money he has taken off a dead passenger, it seems that all their troubles are over, and revelry ensues. Swidey’s hilarious, drunkenly exultant “I’m going to Harvard!” monologue might be the best thing in the whole trilogy.

Amos does go to Harvard, where he quickly metamorphoses into a three-piece suit with a gold pocket watch. In his absence, Joshua kills Dan in a jealous rage. Act Two of Aipotu takes place in the prison cell where Amos, now considering a political career and sensitive to scandal, has brought Lydie to dissuade Joshua from publishing his memoir of commune life. She is a shadow of her former self, dressed somberly in borrowed finery, her once bell-like voice now a morose, husky monotone. Lydie’s children were taken from her after she was discovered attempting to suffocate one with a pillow while she slept, and she has been exiled from her beloved Nantucket. The pursuit of utopia has, in one way or another, destroyed them all.

In Madaket Road, the trilogy concludes in a rather noxious stew of Ibsen (Ghosts) and O’Neill (Mourning Becomes Electra). Suddenly everyone has syphilis. Suggestions of incest, pedophilia, and hereditary madness are all around us. To Lydie, in particular, Guare attributes deeds so dark that it becomes difficult to track and believe her transformation. Now dead by her own hand, she is present in Madaket Road only as a ghost. Lydie’s fragile young daughter is so plagued by the memory of finding her mother hanging from a noose that she herself is driven to the verge of suicide. What, one might be forgiven for wondering, have these characters done to deserve this? Dared to dream? Abandoned the cause of racial justice? We see no black characters after Cold Harbor except as members of the onstage band. Unfortunately, the plot becomes so macabre as to distract from Guare’s more interesting observations about history, those who make it, and those who are unmade by it.

“A vast similitude interlocks all”

But Savadove and his intrepid cast buoy Lydie Breeze through these depths, ultimately leaving us with a sense of wonder. As Walt Whitman wrote, and as Guare’s characters are fond of quoting, “A vast similitude interlocks all.” Anyone who has ever marveled at the many accidents of fate that add up to determine our coordinates in the great span of eternity will feel a kinship with these people. And bringing all three plays together to be experienced in a single day allows us to appreciate the metaphysical interplay between boundlessness and cruel limit that the trilogy seeks to convey. Lydie Breeze is a monumental accomplishment, and it is a great pleasure and education to spend a day feeling ourselves carried along in the flux of time with these uncommon souls.

This article originally appeared on The Art Blog on May 4, 2018, and has been reposted with permission.