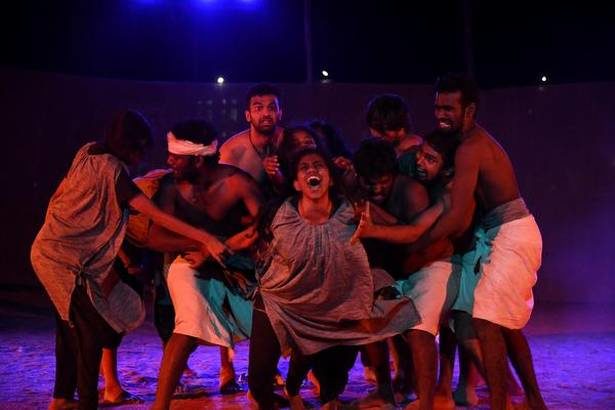 S. Murugabhoopathy’s Miruga Vidhushagam is a comment on civil society that stands mute spectators to fellow brethren struggling for life in war-ravaged countries

S. Murugabhoopathy stands out from his fellow theatre exponents with his distinct presentation. In Miruga Vidhushagam he once again uses the tribal imagery and sounds to create that eerie feeling.

Presented by Manalmagudi Theatre Land and staged in association with the Arul Anandar College, the play talks about how people in war-ravaged towns suffer not only physically but also mentally. “Vidhushagam means clown. A clown is a person who can travel from past to present and vice versa. I thought how it would be to look life of war-stricken people from the point of view of a clown. Moreover, nobody cares about animals during wartime. I have used the clown to see the world through animals’ eyes,” he says. 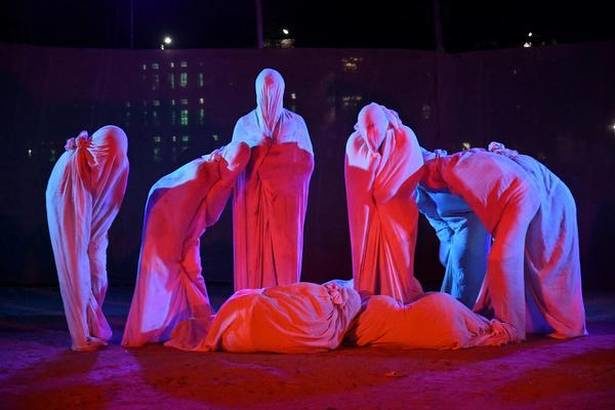 The play is thoroughly an experimental piece with the folk music and impassioned tunes. In a way, the ensemble synthesizes all the elements to demonstrate how theatre can be a vehicle of protest. The characters do not have an identity and represent the human community. The property is effectively used as they become a part of the play. For instance, the bamboo basket resembles a shell, tortoise, and a prison. The play is so forceful it hits hard as the characters fling themselves around and land with a thud to drive home their point.

“When war strikes a place, it wipes out life. The whole biodiversity is gone. I deliberately chose this presentation so that people hate war and love peace,” says Murugaboopathy. The play is a direct attack on the civil society which is so self-centered and oblivious to the happenings around. The costumes and property sport earthy color in tune with the sufferings of people and those who feel neglected and isolated by the society.

The movements are perfectly choreographed so as to give a mythical quality to the performance. No one is allowed to raise voice for the welfare of the people in this civil society and is well depicted when people shut the mouth of the character who tries to break free from the clutches of the society.

Murugaboopathy uses a variety of instruments like didgeridoos and drums to enhance the emotions arising out of pain and suffering. The ringing of Tibetan bowls and the actors’ frustrated cries call for attention.

In a way, Murugaboopathy’s plays are poetic as they give plenty of scopes for the audience to introspect with less use of words and more of sound and action.

This article originally appeared in The Hindu on January 19, 2018, and has been republished with permission.