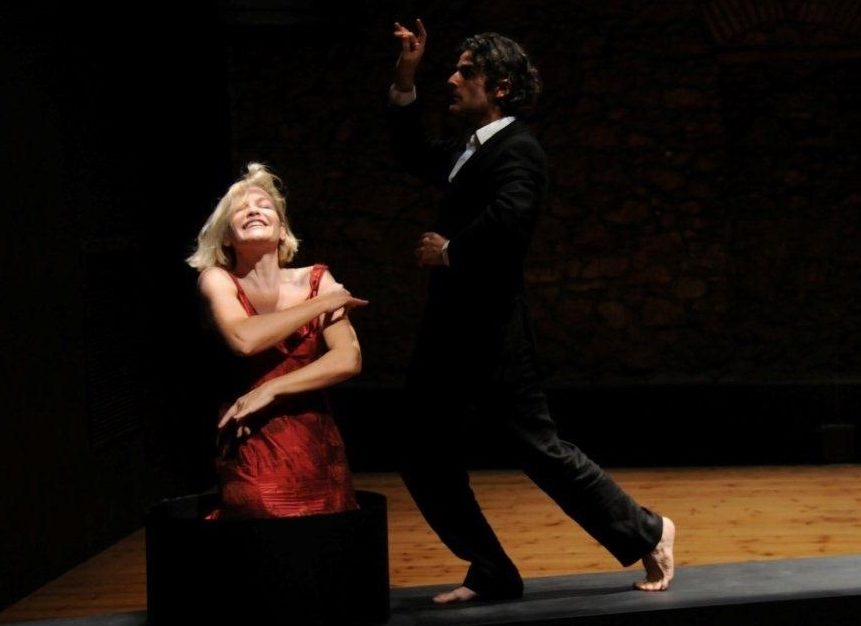 “I was Hamlet. I stood on the coast and spoke with the surf BLABLA at my back the ruins of Europe” wrote, Heiner Müller in his Hamletmachine. Thirty- seven years later, his old student and one of the most brilliant Greek directors, Theodoros Terzopoulos,  presents Amor to his audience by saying “At the bottom of Europe I sell everything,”  alluding to Marx’s oft-quoted statement that all great world-historic events appear the first time as tragedy, and the second tas farce.

Amor, a scenic composition based on a text written by Thanasis Alevras, playing in November as part of the Wroclaw Theatre Olympics on loan from Attis Theatre in Athens, was an avant-garde production  at its best, following the method of Theodoros Terzopoulos. 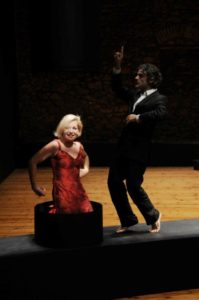 The performance is set in a dreary noman’s land where anything human (emotions, memories, dreams, body parts) can be sampled, priced, and purchased. A man (Antonis Miriagkos) and a woman (Aglaia Pappa) are facing but not looking each other. He is on the right, in a business suit, compulsively uttering nothing but figures, calculations, statistics. She is on the left, in a red dress, talking in financial jargon. This kind of vocabulary indicates the transactional relationship between them; he wants to buy, to win, to expand. She wants to be sampled, stocked, and sold. Their love affair is transcribed in trade terms.

Apart from the two protagonists, Amor also includes a third one; the stage set. A moving  surrealist-cubistic image, the scenery comprises an iron tube (on the left of the stage) with a spot of blinding light descending from the ceiling and illuminating the woman whose body is still and trapped inside the other half of the tube. During the performance, this tube creates a dismal atmosphere: it carries the threat of a future confinement, of a definitive end. On the right, a long, narrow, black ring allows the man to walk from right to left, towards and away from the woman. On the right side of the stage, there is an iron ladder.

Aglaia Pappa’s acting combined the dehumanization of the woman-object with the awakening of the primary human desire in  her brief dance. She presents internal speed in immobility, like a spinning top. Antonis Miriagkos transcribes experiences, subconscious traumas, desires, and fears into mechanical movements and gestures with acting accuracy. The pulse of his speech penetrates his body at every single moment. The two actors complement each other and manage to build a relationship of interdependence. The woman is almost motionless; she only moves for a few seconds vertically to the ring in order to reveal the rest of her body and begin her dancing. The man, on the other hand, is in constant motion, walking from the right to the left side of the ring. She will be eventually trapped inside the tube, materializing the phrase “No way out” that she had repeated many times earlier, while the man ends up on the top of the ladder screaming “Amor!”

Based on an admittedly unoriginal text, Theodoros Terzopoulos throws light on a prevalent way of life which  looks for a fake, materialistic bliss in avoidance of pain and death. Human tragedy has become a farce. However, the finale leaves some room for hope. Amor, the very title of the play, allows for some optimism, as the word itself- the expression of the primitive human  desire is  a promise of their encounter.  Amor functions, Badiou suggests, as the passage of the One of solipsism to the infinite multiplicity of the world and the nocturnal fissure of the gray darkness of being.