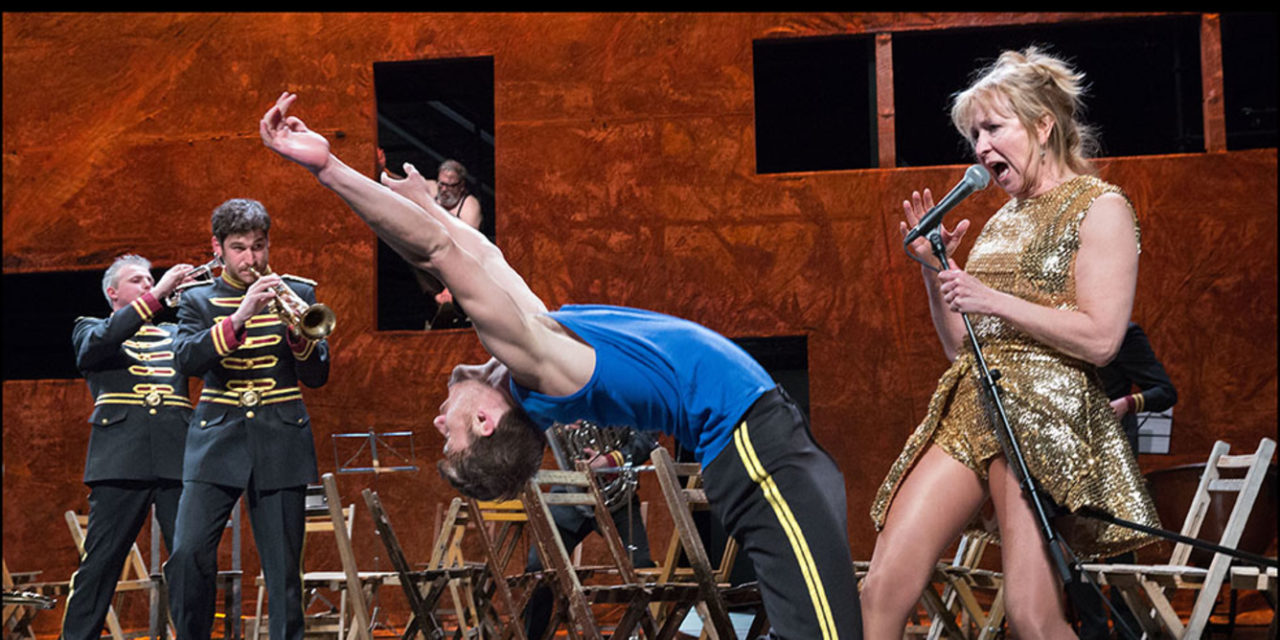 The show tells the story of Wim Opbrouck, a trombone player forced to play cymbals instead, as he copes with late-stage throat cancer. In the opening sequence, the audience is invited into the world of the cymbal player: the anticipation, the angst, and the boredom.

In fact, the cymbals themselves become a delightful folly for humor, happiness, and freedom as the ensemble rehearsal gets underway.

The setting of En Avant is the brass band rehearsal room; wooden chairs, folding metal music stands, and a backline of percussion. The set is enhanced by a high backdrop in which large rectangular holes are cut, providing the setting for solos, observations, and activity throughout the show.

What unfolds in this space is part theatre, part dance, but mostly music. The theatre is centered around Opbrouck as he comes to terms with his demotion and two marionette dancers who provide a commentary on his life, and on their own relationship to him. They always speak into microphones, placed high above the band, forcing the marching girls to stand on chairs to vent their frustrations.

Indeed, the show is full of these absurdist moments: the two women become a giant elongated marching girl through the use of the backdrop, and an unexpected sex scene unfolds between an amorous trombonist and a marching girl while a soloist gargles nearby, accompanied by the music of Strauss. A French horn mouthpiece solo provides music for an improbable duet between our ageing cymbal player and an effortless dancer.

Slapstick humor abounds – “I am a man from Brussels, six foot tall and full of muscles” or “What kind of music do kangaroos listen to? Hip-Hop, Hip-Hop” – alongside more poignant moments.

The band marched a somber Verdi March, perhaps the death march of the cymbal player, insistently circling slowly around the stage, before retreating backstage, still audible, and opening up a whole new sonic space of the beyond.

The traveling group collaborates with a local band in each city in which it performs, swelling the band to over 40 musicians, dressed in matching marching band jackets.

Opbrouck interviews the Excelsior Band after their show-stopping number, finding out what they do for a living – and we discover the band is, in fact, full of a cross-section of our community: an engineer, a sales rep, a funeral director, a teacher.

Dance is totally subdued in the first half of this show, only to be unleashed at the opening of the second part, in a well-earned transformation of the house band from controlled and refined to free spirits. Musically, it slips from classical to jazz to folk and cabaret, seamlessly mixing these worlds.

There’s sometimes so much happening simultaneously in this show that it’s hard to follow a dominant thread, with eyes darting around the set to avoid missing anything, and the multi-lingual delivery (all European languages) adding to the layers of confusion and alienation felt in this piece.

By contrast, the musical performances themselves were focused and sublime. The opening full-band rendition of Elgar’s Nimrod (Enigma Variations) made the trip to the theatre totally worthwhile. With perfect ensemble balance, tuning, and musical phrasing, this performance was the highlight of the entire show.

Ballet C de la B have explored live music many times before, using the natural approach of the musicians, and their innate gestural language as a central theme. This work was no different, except that the Excelsior Band stole the show.

Given the collaborative nature of this work, it would have been great to credit each and every member of Excelsior Band in the program. It would also be nice to have the musical repertoire listed in the program – essential to the unfolding of the drama.

The show itself errs toward self-indulgence, yet somehow the uniformed brass band keeps music at the center. The histrionics of the cast can be set aside to reveal the true heroes of the performance.

En Avant, Marche! is showing at the Queensland Performing Arts Centre until September 7.