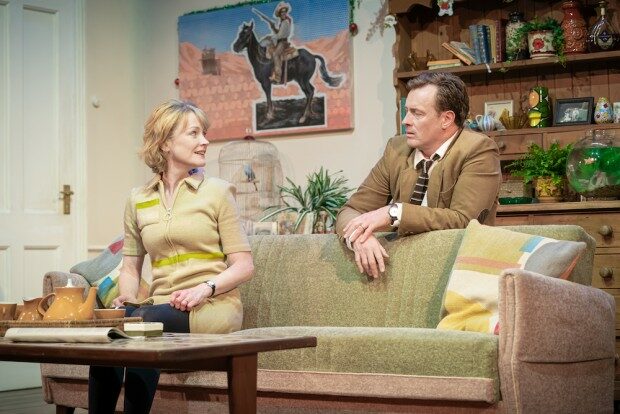 Claire Skinner and Toby Stephens in "A Day in the Death of Joe Egg". Photo credit Marc Brenner.

Playwright Peter Nichols died aged 92 last month, just before the opening of this starry West End revival of his most celebrated masterpiece. A Day in the Death of Joe Egg (1967) is based on his own family experience of bringing up his disabled daughter in the 1960s, and it has the reputation of being one of the most ground-breaking plays of its generation. This revival stars Toby Stephens and Claire Skinner as the parents, Patricia Hodge as the mother-in-law, and Storme Toolis, who has cerebral palsy and is familiar from New Tricks, playing the daughter Joe. As a campaigner for the rights of disabled actors to play disabled roles, her casting is one indication of how current sensibilities have changed for the better. But is the play any good?

The play is famous not only for its willingness to tackle painful subject matter, but also for its comic tone. It is, after all, a comedy about a couple caring for a severely disabled 15-year-old girl. Teacher Bri (Stephens) and Sheila (Skinner), the parents, make copious use of black humour to cope with the stress of looking after Joe (Toolis). So the play starts off with Bri coming home early from his job as a school teacher, in the hope of having sex with his wife while their daughter is out. With direct address to the audience, and some jokes that are still edgy in their deliberate bad taste — Joe is called a “wegetable” and “spastic” — the first half is like a vaudeville routine which has had a shot of the Monty Pythons as well as Waiting for Godot.

In the second half, the piece into more of a bleakly satirical sitcom, as two of the couple’s friends, Freddie, a charity-conscious socialist businessman, and his wife Pam, arrive. Freddie is full of advice about how to care for the disadvantaged while Pam, who can barely bear to look at Joe Egg, thinks she should be put out of her misery and tells the audience that the child should be “put to sleep”. That’s 1960s leftism for you. Then Bri’s mother Grace (Hodge) arrives on stage, while Bri and Sheila continue to bicker and cope as the carers of a profoundly disabled little girl. What happens next stretches the boundaries of the permissible and, if it wasn’t for the comic devices, would be almost unbearable to watch. Yes, it’s that tough.

Nichols was a brilliant playwright: here he uses a whole array of theatrical and meta-theatrical devices — from vaudeville routines to direct address to the audience — to tell the story and give us insights into each character’s psyche. For a start, Bri elbows his way centre stage, beginning as a manic teacher in a rowdy classroom and then persists in grabbing attention as the selfish overgrown boy that he really is. It’s a star role and Stephens embraces it with evident joy and a delightful palette of facial grimaces, physical comedy and vocal flutes. He is well matched by Skinner as Sheila, calmer, more sensible, more grounded, but clearly a woman coping not only with two children (including her husband), but also with her own guilt.

The issues raised by the play remain vivid: how do we treat disabled children, how much of a strain does a needy child put on its parents, and how do adults cope with emotional strain? The differences between male and female reactions to family matters are beautifully outlined in way that has not dated, although nowadays maybe the women would have jobs outside the home. Anyway, there’s a wild hilarity about the way that Bri and Sheila act out scenes from their child’s early life, and examine who they think is to blame for her disability. Nichols is careful to give the child a distinct personality, even if indirectly, and Toolis is hearteningly expressive in her portrayal.

Likewise, Hodge plays Grace as a comic cameo and the play climaxes nicely in a series of farcical jokes about the blackest of events. Simon Evans’s terrific production is designed by Peter McKintosh and presents a pretty perfect balance between tragic desperation and uneasy laughter. As well as compelling performances by Stephens and Skinner, Clarence Smith and Lucy Eaton breathe hilarious life into Freddie and Pam. The use of “Dear Mr Fantasy” by Traffic on the soundtrack not only lets us time travel to the late 1960s, but also highlights this brilliant production’s lightness of touch. Great, great stuff!

A Day in the Death of Joe Egg is at Trafalgar Studios until 30 November.