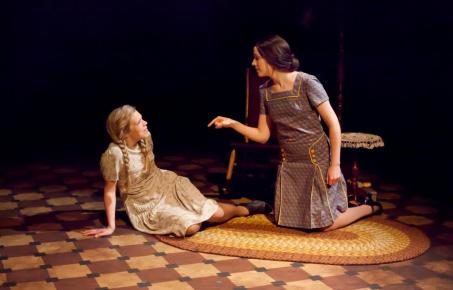 Hannah Moscovitch’s play What A Young Wife Ought To Know, which is based on a compilation of letters women sent to famous birth control advocate Dr. Marie Stopes in the 1920s, tackles an uncomfortably difficult theme. It is particularly hard to watch nowadays when crimes, attempted against women, are coming to light every day.

The subject matter of Moscovitch’s play, which is so deeply sad and disturbing, does not allow the spectator to relax for one minute from the overwhelming horror. Nevertheless, the playwright, with the director, technical crew, and actors, create an intimate, haunting story and infuse it with so much warmth and humor that it seduces its audience in spite of the uncomfortable truths it speaks. The result is an overwhelming empathy and understanding for the characters and a play that stays with you long after you’ve left the theatre and dried your eyes.

The story centres around Sophie, a young wife and mother, who addresses the audience directly, sharing the grim details of her life–from crippling poverty, the abuse she suffers at the hands of her sister and mother to her lack of sexual education–as well as her strength and passion for life and love her husband, the handsomest stable boy Johnny. The script doesn’t shy away from showing the suffering, anxiety, and drudgery women endured, from constant pregnancy and self-induced, often fatal, abortions to an inability to feed their children due to poverty and the precarious working conditions of the time. Sophie’s often harsh older sister, desperate not to get trapped in a marriage and with the help of her younger sister, terminates her own pregnancy, with disastrous results. These events haunt Sophie, especially towards the end when the hardship of the young woman’s life starts to take a toll on her existence. 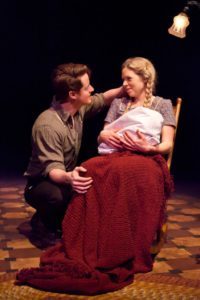 The relationships in What A Young Wife Ought To Know are the key to a strong portrayal of the play’s message and they come across as achingly sincere and nuanced under Christian Barry’s direction. There is so much good will, romance, and passion between Sophie, a sometimes overly breathy but otherwise mesmerizing Liisa Repo-Martell and Johnny, a charming David Patrick Flemming, that it’s easy to root for them with all your heart. Yes, they are naive and stubborn and yes, Johnny’s inability to truly understand the suffering of his wife, much as he loves her, is frustrating, but both Repo-Martell and Flemming play their characters with such honesty, giving them context rarely seen in stories, that it’s easy to understand and feel along with them. Their portrayal of the strain poverty, degradation, and lack of birth control puts on a relationship is so heartbreaking that is can incite the hardest hearts to revolution.

Andrew Cull’s simple set design and Leigh Ann Vardy’s lighting round out the excellent production and create an eery, atmosphere for these events. Vardy does a wonderful job of creating dimension and a sense of time and place on stage, while Cull’s set, spartan in design, adds to the feeling of intimacy.

Much has been accomplished in the last 100 years when it comes to women’s access to birth control and safe abortions. Yet, Canada is still one of the only countries with publicly funded health care that doesn’t provide some contraceptive coverage for women. 61% of women in Canada have had an unintended pregnancy, a fact I’m sure is closely linked to difficulties such as the cost of birth control and easy access to the process. Politicians in the United States, have been lobbying for decades for the restriction of birth control and abortions. What A Young Wife Ought To Know gives us a scary look at the realities of sex without birth control and the strain placed on women and their relationships without it. The message of the performance stays with us because of the quality of the production, but also because it reminds us that the fight is far from over. It’s a play well-worth your time and will linger with you long after you have left your seat.

This article originally appeared in Capital Critics’ Circle on January 20, 2018, and has been reposted with permission. 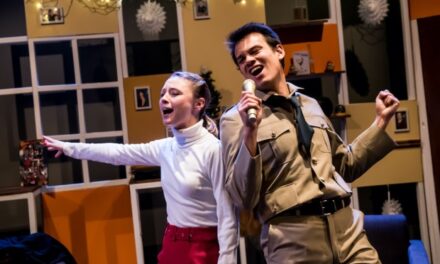