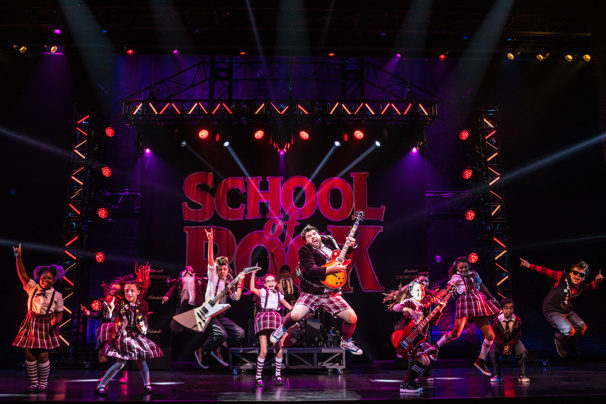 The company of "School Of Rock." Photo by Matthew Murphy.

The great pity is that this high-energy rock musical is largely unintelligible. From flashing lights and the smoke of dry ice to booming sound, all the accouterments of a rock concert are in place, but only rarely are the song lyrics or even the dialogue distinguishable.

The storyline—in part a rock version of Meredith Willson’s The Music Man—focuses on Dewey, a wannabe rocker, who cons his way into a temporary teaching job at an upper-crust private school. His gift to his musically talented class is to prepare them to compete in the Battle of the Bands and, in so doing, to gain the confidence to step out of their rigid, sheltered world.

Based on the 2003 movie, the 2015 musical School Of Rock, with book by Julian Fellowes (Downton Abbey), lyrics by Glenn Slater and music by Andrew Lloyd Webber, tracks the progress of Dewey from being kicked out of a band, threatened with eviction for non-payment of rent and into the substitute teaching job for which he is totally unqualified. But, in line with other tales of teachers with a passion for learning, he is able to inspire the students. 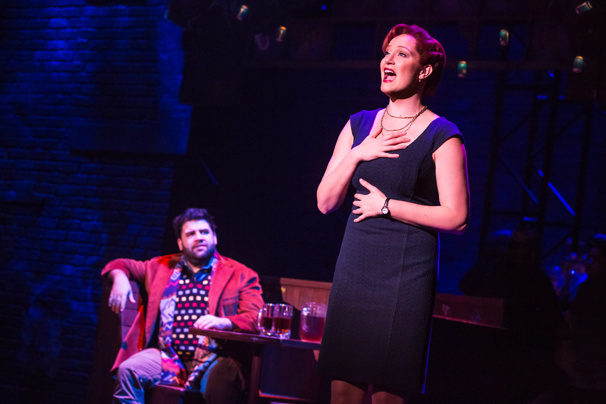 As soon as the dozen talented young performers appear—frequently taking over the stage—School Of Rock, directed by Laurence Connor, with efficient fluid sets from Anna Louizos, jumps into life. Standouts are drummer Cameron Trueblood, soloist Grier Burke, and the super lively Leanne Parks.

Also noteworthy is Lexie Dorsett Sharp as the strait-laced school principal set to melt. She is one of the few cast members who brings vocal clarity to her role throughout. As the slobbish Dewey, Rob Colletti exhibits considerable warmth and wisely keeps the kids front and center whenever he can.

Musically unmemorable except for the Stick It To The Man theme song—a slightly surprising tone to be set by a hereditary lord and a British life peer—and the message conveyed by If Only You Would Listen, School Of Rock is primarily a fun showcase of the kids’ musical and instrumental punch, complete with a strong finale intent on raising the roof.

The Broadway Across Canada production of School Of Rock continues at the National Arts Centre to September 30.

This article was originally published on the Capital Critics’ Circle on September 26, 2018, and has been reposted with permission. 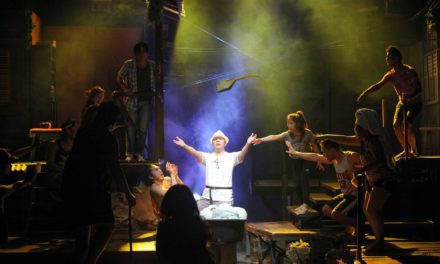 Showcasing Filipino Pride in “Rak of Aegis” The Musical