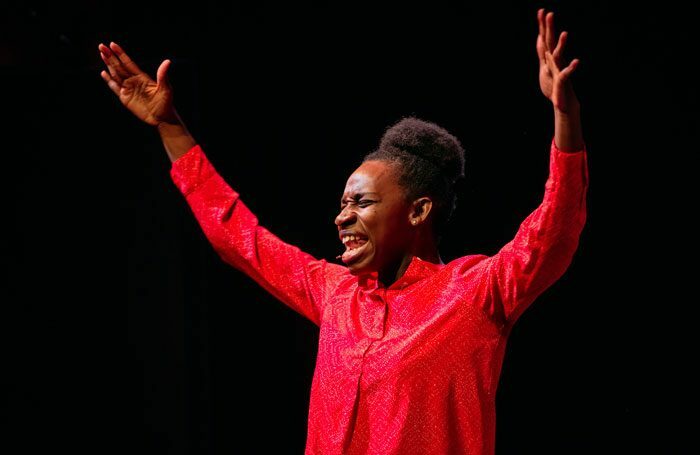 After graduating from City College of New York in the 1960s, Assata Shakur joined the Black Panther Party. In 2014, after enrolling at Washington University in St Louis weeks after unarmed teenager Michael Brown was killed by a white police officer in the same city, Ambrosia starts going to Black Lives Matter rallies. Moved by injustice decades apart, the two Black women are subjected to systemic racism and violence in their pursuit of freedom. Apphia Campbell performs them both, embodying their passion and anger through storytelling and song, in this lightning-strike of a show.

With minimal set and props, all attention is on Campbell – who does more than just hold it. She demands it. Her voice dances through blues and spirituals that punctuate the rich, emotional landscape of her characters who are fighting for change. Youthful optimism, naive confusion and justified rage are a few of a spectrum of feelings that fill the space – there is real range here, not just the singular note of anger that, whilst justified, can render characters two-dimensional. She flips between characters with clarity and unwavering intention, showing the craft and skill of an experienced artist. She is immensely watchable, sculpting each character with a concise vocal signature and energy, and a physicality just as exact.

Though the show unquestionably depicts racial inequality at the level of state judicial and law enforcement systems, it is also a lesson in African-American history. I had never heard of Assata Shakur, who is one of America’s most-wanted criminals and living in exile in Cuba after escaping prison in 1979. There isn’t much about the Black Panther party in particular as this is a show about lived experience, but it’s a pointed reminder to question the history we know and seek out erased and silenced minorities.

This is a little show that roars with generations of unheard Black voices, past and present, who have been oppressed by white supremacy in America. The nuanced characters show the genuine humanity behind media reports of riots, shootings and crime, and calls those in power to act on dismantling systems of oppression.

This article was posted at https://theplaysthethinguk.com by Laura Kressly on the 13th of June 2019. Read the original article.