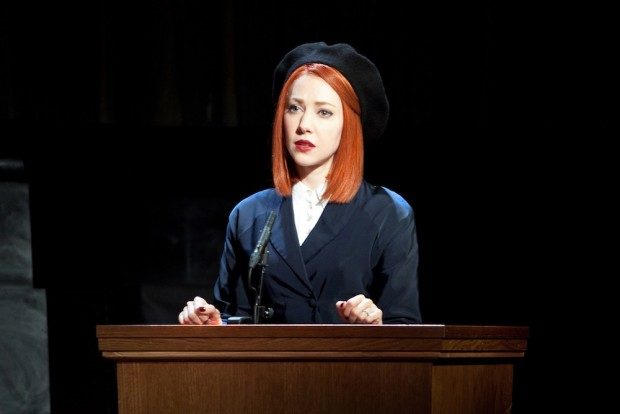 Catherine Steadman in "Witness For The Prosecution." Photo: Sheila Burnett

Some site-specific theatre feels like a really good fit. You could say, in this case, that it seems like poetic justice. Agatha Christie’s 1953 play, Witness For The Prosecution, used to be a rep standard, and now gets a compelling new production in the echoing surrounds of the Council Chamber at London County Hall, which is situated on the South Bank, next to Westminster Bridge, and was once the scene of Ken Livingstone’s leadership of the Greater London Council. The drama, which the Queen of Crime adapted from her own short story of the same name (originally published in 1933), centers on the trial of drifter Leonard Vole for the murder of Emily French, a wealthy older woman who has changed her will to make him her heir.

Beginning with Leonard’s nightmare of being hung by the neck until dead, the story is soon up and running. After the body of French is found murdered in her home, the police, led by Inspector Herne, think they have an open-and-shut case. After all, Leonard, a young man who is an unemployed mechanic, has recently befriended her, and he obviously needs money. There is blood on the sleeve of his jacket and his only alibi is his wife, Romaine, a German actress and migrant. But while Herne arrests Leonard, his defense team—solicitor Mayhew and barrister Sir Wilfrid Robarts—believe they can prove his innocence.

The actual court case gets rapidly underway and proceeds at a gallop, with, as is traditional, the two barristers—a scornful Myers QC leads the prosecution—crossing swords over the facts and quickly cross-examining the handful of witnesses: police detective, forensic specialist, doctor, housekeeper and, as the play’s title warns us, a star witness for the prosecution. Christie sets up the plot twists with her usual neatness and economy, gradually creating dramatic tension and helping us on the way with some nice touches of wit.

Admirers of Christie will not be surprised at the clarity and humor of some of the dialogue. When Leonard says that he can’t believe that people would tell lies in court, his lawyer says simply: “It has been known.” In this Brexit era, some aspects of the play feel freshly relevant: the whole story revolves around the idea that British justice is the best in the world, that we are a fair and tolerant nation. Yet Christie puts this national self-image through the wringer, both lauding and criticizing the system at the same time. Likewise, the idea that foreigners—especially Germans— are suspect, liable to betray us, is once again troubling. Romaine, a German refugee, comes across to the upper-middle-class Brits as inherently untrustworthy.

There’s a lot here about the British class system: public schoolboys fence with each other as judge and barristers, while the fate of working-class and more vulnerable individuals depends on them. The privileged sound as if they are at school debating chamber, while the death penalty awaits the guilty. Yet the plot shows that the idea that reasonable men are cleverer than emoting foreign women (Romaine) is questionable, and once again the emotional fuel of the play comes from Christie’s own experiences of her first husband’s disloyalty. As an account of British national prejudices, the play remains more relevant than its genre character suggests.

Lucy Bailey’s site-specific production is a delight. The octagonal Council Chamber, originally designed by architect Ralph Knott in the 1920s, was once the debating chamber of the GLC, and its vast marble columns and pompous monumentality fits well with the formality of the court proceedings. The audience sits in the councilors’ seats, complete with carved wood, leather, and little padded tables. The smell is olde worlde, and the imposing historic atmosphere adds to the story. There are some superfluous sound effects piped to seats through the speaker systems, but Bailey’s direction is efficient and effective.

Presided over by the Old Bailey figure of justice, the set is designed by William Dudley with lighting by Chris Davey. Jack McMullen’s Leonard is fresh-faced and appealingly callow, while Catherine Steadman’s Romaine suggests the steel beneath the charm. As the lawyers, Patrick Godfrey (Judge), David Yelland (Robarts), Roger Ringrose (Mayhew) and Philip Franks (Myers) deliver the courtroom fireworks. Of course, this site-specific version is a bit of a gimmick, and while one part of me yearns for the play to be allowed to speak for itself, another just relishes the novelty of this revival’s setting. So what’s the verdict? Guilty of being a good night out

Witness For The Prosecution is at London County Hall until March 11, 2018.

This post originally appeared on Aleks Sierz on October 23, 2017. 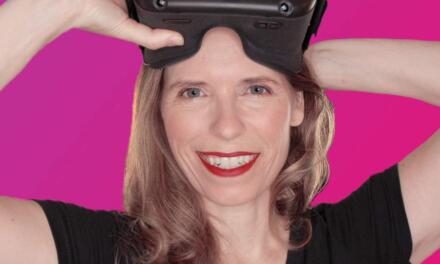