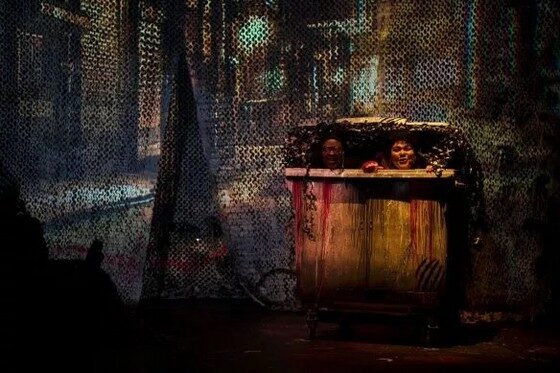 In true international award-winning Black Honey Company style, One The Bear bursts on the audience. In an apocalyptic aesthetic avalanche, its stars, the story’s titular One (Candy Bowers) and her best friend Ursula (Nancy Denis), emerge from a rubbish skip. One and Ursula are bears attempting to escape a hunter. Such is the reality of their untold herstories, which form the basis of this enigmatic work.

The abiding hyper-real aesthetic comes courtesy of video designer Optikal Bloc. The accompanying explosion of fluorescent color details down to not just performer glasses but even the eyelashes behind them. As always, music is at the heart of the production. Composer and sound designer Kim ‘Busty Beatz’ Bowers’ creation crafts a hip-hop stadium concert within the Roundhouse Theatre space that, unfortunately, initially competes with the performers delivering song lyrics.

Things soon settle beyond performance art into a story as One starts talking about her mother’s legacy. The narrative reveals the story of the two bears finding their relationship in disarray as One gains celebrity status. Reduced and seduced into the all-white commoditized, exploitive and materialistic world, she struggles to stay true to her intention to finish what her mother began and her determination to never to become a pet.

As a fairy tale for the hip-hop generation written by Candy Bowers, One The Bear represents allegorical storytelling at its most engaging. Its representation of intergenerational colonization and assimilation comes with a modern twist. The work, which has grown out of the lived experience of its feminist dreamer creators, has been devised with a teenage audience in mind. Those in the opening night crowd within this demographic certainly seemed to be engaged and empowered by its prompt to reflect critically on the impact of media saturation, culture consumption, and colonization.

The hour-long show flies by in a cyclone of color, movement, and energy. This requires physical performances from Bowers and Denis as they shake their little tails all around the stage. Bowers conveys both strength and vulnerability as the titular One and Denis’ versatility impresses without detracting from Bowers’ essential presence. Indeed, Denis is hugely entertaining, not just as best friend Ursula, but as the bear enthusiast journalist who discovers One as a star whilst undercover 21 Jump Street style. 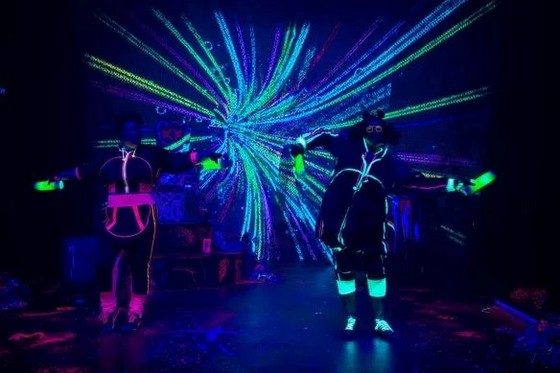 Memorably, the story is told in rhyme. The enticing rhythm this creates moves things along, but not at the expense of pace and pause, which is used to control not only the narrative but audience response to it. And the rhymes become entertainment in themselves, working even when (or maybe because) they don’t entirely work, with interactions like “this cereal tastes like latex…what do you think is going to happen next?” adding an additional layer to the show’s humor and a script that is full of funny lines.

One The Bear is an innovative work that takes its audience on a loud, proud and powerful journey in its smash of traditional notions of political theatre and show of how all theatre spaces should be for everyone. If you like to be challenged by what you see on stage, you won’t regret giving your time to this brave, different and daring work and will not only enjoy its paw-up revolution but be empowered to growl along and share its message about sisters never being defined by misters.

This article first appeared on The Blurb on October 16, 2017 and has been reposted with permission.