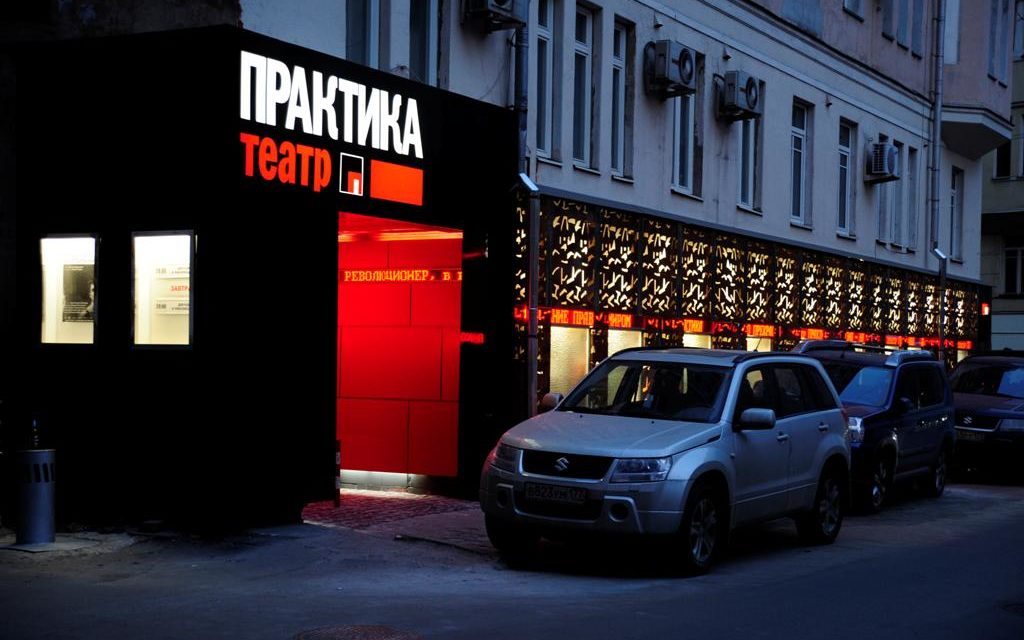 Moscow theatre Praktika is the Russia’s first contemporary State theatre which played the key role in the renovation and development of the Russian theatre scene. Mikhail Ugarov, the late artistic director of the independent Theatre.Doc, described its opening in Moscow in October 2005 as the event which shook the cultural life of the Capital. Praktika was the first State theatre to stage exclusively contemporary plays and focused on New Russian Drama, the contemporary theatre movement aiming at renovation of Russian theatrical language and themes, which before that had been relegated to small independent underground theatres. Quite literally Praktika is an underground theatre as it is located below the street level. However, being a State-sponsored theatre it represents the first attempt of the establishment to understand contemporary drama.

Praktika has a twofold mission–to give the stage to the emerging playwrights and actors, and at the same time to bring thought-provoking and innovative plays to the wider public. As now well-known playwright and director Ivan Vyrypaev said back in 2013 when he was part of Praktika, contemporary theatre is an analysis of society and, thus, has both aesthetic and social functions. It shows the spectators what contemporary art is, but at the same time helps them to understand their own self and their inner potential. Praktika was born as a “theatre of the future,” which opened for an audience that at that time did not yet exist. They aimed at the new emerging creative class, who is not attracted to the traditional theatres and seeks new ways to express their ideas. The main achievement of Praktika was bringing contemporary Russian plays to the broader public, allowing them to leave the closed niches they previously belonged to.

Praktika deconstructed the concept of the theatre as Russians know it, broke with the understanding of the theatre as a temple and made it accessible to everyone. No wonder that during the first seasons each performance was followed by the heated discussion with the audience.

As its founder Eduard Boyakov puts it, Praktika was established to foster the renewal in Russian theatre focusing on contemporaneity, staging New Russian Drama plays, introducing a new approach to directing and opening towards the less traditional kinds of theatre. Praktika contributed to the popularisation of the underground theatre movement, which became nationally and internationally accepted making it to such stages as that of Chekhov Moscow Art Theatre.

The innovations introduced by Praktika are inextricably connected to its management strategies. Unlike the majority of Russian theatres for the first 11 years of its existence, Praktika didn’t have a set troupe but relied on the participation of guest actors. While this allowed more flexibility of the acting styles and the projects, it was dependent on the changing availability of each actor and did not allow to develop a regular programme. Such system demonstrated the potential of innovating the theatre system, but could only be effective when used by several theatres at the same time, which even today, is not the case. This is why since the season 2016 season, Praktika has become the home of the studios led by Dmitry Brusnikin and Oleg Kudryashov, although continuing to have hired actors. 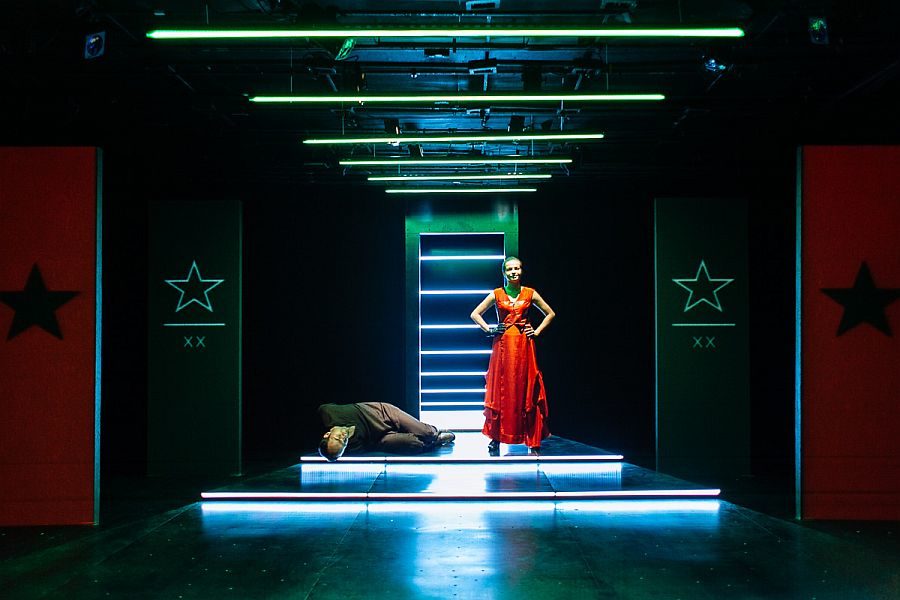 Investigation. Play by Igor Simonov. Directed by Russian Malikov. 2014. One of the most talked about plays of the theatre.

Praktika doesn’t have a fixed repertoire. It was the first to start the reconsideration of the age-old repertoire system in Russia–where plays stay on the playbills for decades–as here plays are taken out of the program as soon as they lose their urgency: what is not contemporary and is no longer relevant to everyday life is considered superfluous and not worth staging. According to Praktika’s creators everything presented on stage has to have a purpose and theatrical experimentation cannot just happen for its own sake: Praktika is very considerate of what is shown to the audience building the trust between the theatre and its spectators. The closeness of the plays to the reality and their topicality assures the viewers that production isn’t just a shallow representation of imaginary events, but an important element of daily life.

Another innovation introduced by Praktika is the hierarchy of different roles involved in the creation of a performance. Traditionally in Russian theatre, the director provides their own interpretation of the text, whereas according to the Praktika philosophy, the spectator should be able to see the play exactly as it was written. The playwright, thus, becomes the central figure equal to that of an actor who, similar to the musician in an orchestra, responds and interacts with the written text. This way, according to Vyrypaev, Praktika is capable to present reality without any filters. 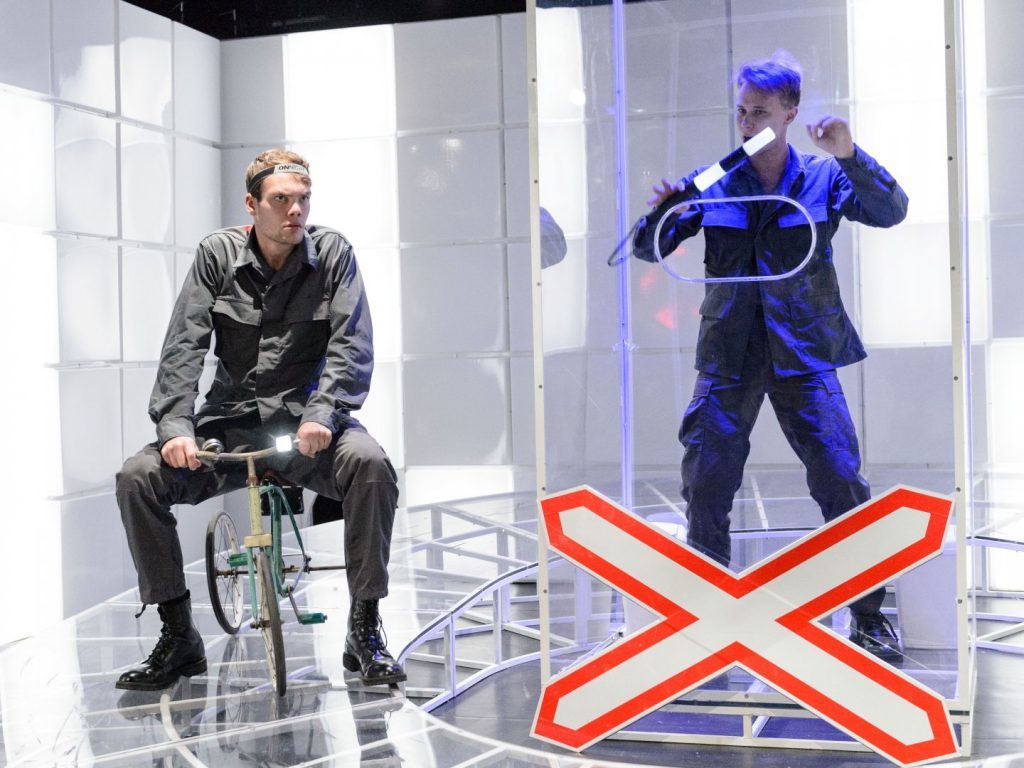 a man from the town of Podolsk Seryozha the dumb. Author: Dmitry Danilpv. Director: Marina Brusnokona. One of the latest performances in Praktika, which got sold out in a matter of days

Many things have changed since Praktika’s opening, and some renovations in Russian theatre are visible but not as widespread as expected. Praktika itself had to change some of its features: whereas at first, they staged plays commenting and often criticizing the State, today some productions get State funding and many of them adopt a much more traditional approach. Will Moscow’s most vibrant theatre be able to keep up the innovation and keep promoting the new cultural practice its name refers to? I leave to the readers to decide.

This article originally appeared in Russian Art and Culture on October 6, 2018, and has been reposted with permission. 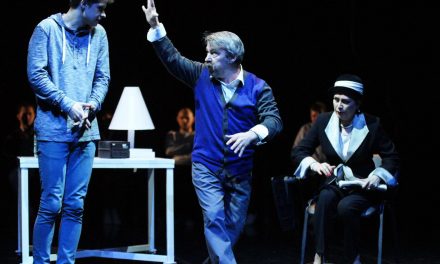