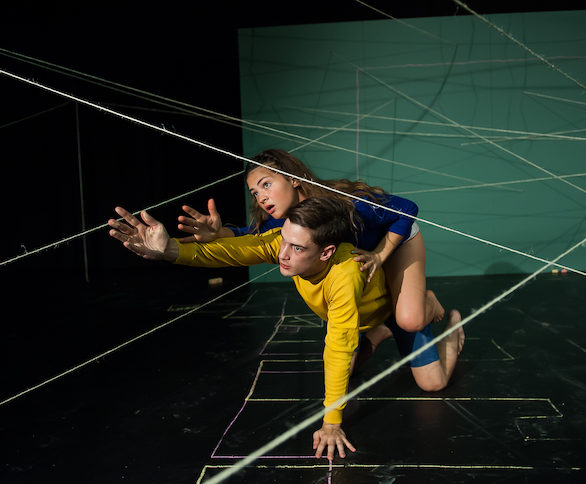 How do you stage appalling real-life events? I mean, without either being too luridly voyeuristic or too matter-of-factly journalistic? Maybe an oblique approach is the answer. This is certainly what Brussels-based BRONKS, one of Belgium’s leading theatres for young audiences, do with their current production, Us/Them, which takes an indirect look at the Beslan siege of September 2004, when a group of Chechen terrorists stormed into a school in North Ossetia, Russia, taking hundreds of children hostage. The siege lasted about three days and left some 334 people dead, including 186 children.

Us/Them is not a documentary account of this terrible event, but an exploration of how the opposition between belonging (us) and exclusion (them) is created, and of the individual way that children sometimes cope with traumatic situations. First staged at the Edinburgh Fringe Festival last year, this award-winning show now comes to the National. Created with family audiences in mind, and aimed at anyone over 12 years old, the 60-minute piece represents the point of view of two unnamed children, Girl (Gytha Parmentier) and Boy (Roman Van Houtven), who experience the siege. 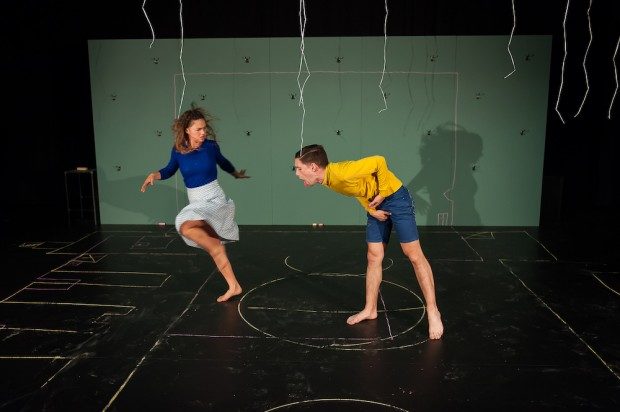 At first, I thought I wasn’t going to like this show. Normally, I don’t like characters who have general names such as Boy and Girl: it’s too vague and unspecific. But these two are highly individual, and although they don’t tell us much about their backgrounds, they give a vivid impression of what it must be like to recall a traumatic event — if you happen to be a child. So the first thing we see is them chalking out a ground plan of the school building, especially the central gym where the hostages are held, on the floor. Each of them draws a slightly different version, and they both insist that their version is the correct one.

One way of coping with trauma is to be exact in your recall, and both kids have marshaled a battery of facts about the events. They reel them off: their town has 33,646 inhabitants, three swimming pools, 21 churches, 53 mosques and five tennis courts…it’s a beautiful place. They belong there (us). By contrast, over the border in Chechnya (them), the kids only go to school until they are eight, their fathers are drug addicts and all the mothers have mustaches. When you hear this it’s both funny and upsetting: the casual prejudice of kids has been created by their upbringing, and fuels the antagonism between two communities.

Written and directed by Carly Wijs, a Dutch-born Belgium playwright, performer, and writer, Us/Them explores not only the tensions between different nations, but shows how the Boy and Girl offer slightly different accounts of what happened in the siege. The details of the mass hostage-taking are just as precise as the details of the town where they live, and Permentier and Van Houten perform this brilliant piece of theatre with a joyful playfulness that is an immediate contrast to the horror of what they are portraying. 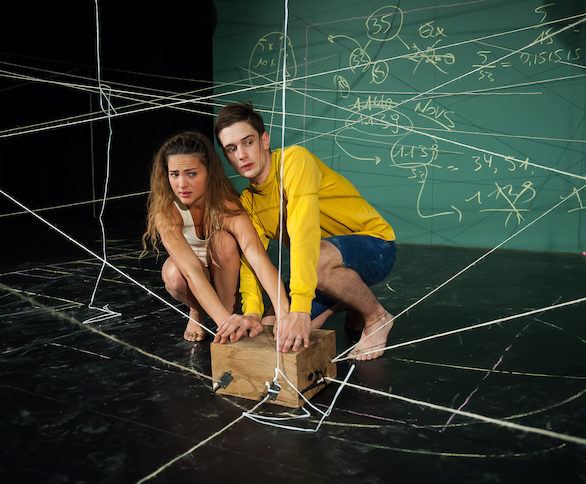 At the same time, both Boy and Girl show how we expect reality to mimic fiction: when the terrorists attack, she imagines that within half an hour the fathers of the children will leave work and ride to the rescue on tractors — just like in a Hollywood movie. Likewise, the difference between us and them feels heightened, as if this were a story from a folk tale. Later, the final end of the siege is fantasized as an episode from Mission Impossible (complete with theme music). Needless to say, at every point fantasy is undercut by reality.

Particularly striking is Girl’s story of what it feels like to be held in a crowded gym with no food and water for hours on end, as the victims begin to hallucinate and faint. Yet even here Wijs injects doses of humor, with childish jokes about breasts and piss, and with Boy proudly describing how long he can go without needing the toilet (breaking his previous record!). Although the two children are not represented literally, their worldview comes across powerfully. In order to cope they hold onto the familiar, and use their school knowledge: at one point, the Boy uses his maths lessons in long division to calculate how many hostages each terrorist has to watch.

Wijs’s production, beautifully created and designed by Thomas Vantuycom and Stef Stessel, has a bare set, with a light-green blackboard and black helium balloons. As the siege intensifies — and with all the hostages crammed into the gym — the space is filled with ropes that criss-cross the stage. This inhibits the free movement of the actors just as their captors control their actions. Both Girl and Boy are nicely contrasted: Van Houten is bigger than Permentier, while she is more agile. They sometimes contradict or correct each other, then prop each other up during their ordeal. Mostly they create a really dynamic performance that is outstanding visually, intellectually, and emotionally.

Although mainly an account of one siege, this is also a universal portrait of how social division is maintained through prejudice, and an illustration of how the media records, packages, and transmits news globally. Once again, the fiction (whether folk myth or media image) moves faster and reaches further than reality. And, on the way, makes huge profits for media corporations. While big and global media flourish by exploiting human misery, an art form as small and local as theatre can act as a critical corrective, reminding us that truth can be both powerful and entertaining. This example of European theatre at its very best has a strongly metaphorical and humanistic vision, and its tackling of a difficult subject is a triumph.