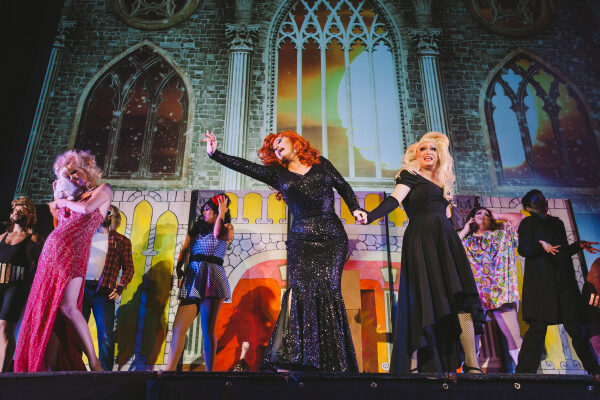 Drag auteur, Peaches Christ, has made their name as an adaptor of cult movies, directing the great and good of Ru-Paul’s Drag Race in leading roles. Drag Becomes Her stars charming long-term collaborator Jinx Monsoon and ‘terminally delightful’ Ben DeLaCreme in the Meryl Streep and Goldie Hawn Film roles. What results is a raucous hour and half-long mess of a show that is both stressful and exciting to watch.

The film is a classic, and Christ leans into the moments that the audience fans are waiting for. Monsoon’s delivery of the famous line ‘NOW a warning!’, after drinking a youth enhancing elixir, is pitch perfect. DeLaCreme is Goldie Hawn, wide eyed, simpering, and conniving. It’s high camp and its great fun. DeLaCreme also provides a whole host of parody songs that break up the action brilliantly, accompanied by sloppy dance routines that are great fun. Major Scales, in the Bruce Willis role, also deserves a mention as his performance perfectly accompanies his leading grande dames.

The supporting cast are weak though, and any scenes without the stars are pretty-hard to sit still through.. This is also not a show for anyone who hasn’t seen the movie of RuPaul’s Drag Race. The latter is referenced so heavily that it gives the show a cynical edge. These references played well with the audience, demonstrating Christ really knows how to cash in on an increasingly popular pop-culture phenomenon.

Fans around the world love the glamour and high camp of RuPaul’s Drag Race, and this show certainly delivers that, too. Christ’s brand is as sure to be a hit over here as it is on the other side of the Atlantic, playing in a pantomime-like genre that fits in with the great tradition of the British music hall.  Subtle this show is not. But, if you are familiar with the source material and stars, there is no chance you’ll have a bad time.

Drag Becomes Her tours through 1 June in Manchester and London.

This review was first posted at The Play’s the Thing UK. Reposted with permission.