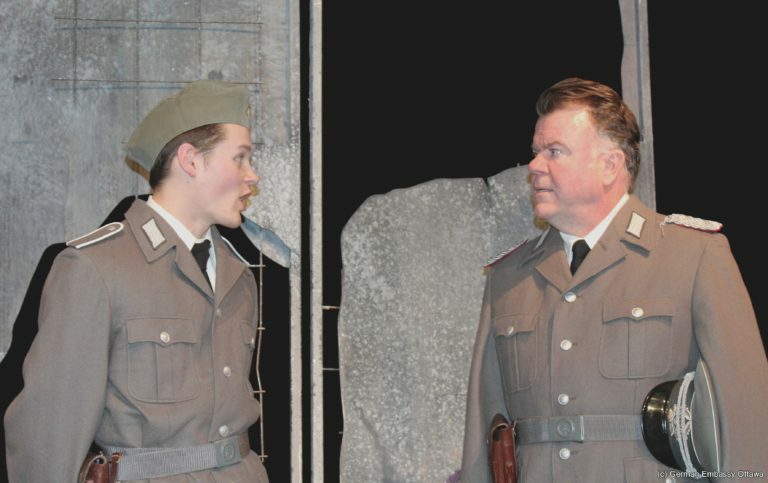 Un-Countried, written by Stéphanie Turple, and directed by Kevin Orr shows what happens when a regime collapses and the human mindset changes.  The new Lab O space in the Ottawa Art Gallery is proving to be a perfect source of stage creativity thanks to the transformative possibilities of the area. It is also an excellent site for students and writers in local experimental shows as well as classes for theatre practice at the U of Ottawa. We should see theatre blooming in this city because of these new possibilities.

Kevin Orr is back with a performance he created earlier and is now bringing to the Industry Showcase in the Lab O site where video projections, delicate sound possibilities and a highly raked audience space creates a small but perfect viewing area for his two-hander, that holds us spellbound.

Two soldiers are manning an East German Border crossing in 1989. Thomas, (John Dickey) the new recruit is nervous, inexperienced a product of the strict ideological Marxist upbringing in the schools of the DDR (Deutsche Demokratische Republik).  His comrade and official superior is the older Max (Michael Hanrahan), cynical, he has lived through multiple regimes, has limited faith in any of them and is mainly waiting to get his pension and get out.  Still, he inspires pity as someone who is not driven by ideology, hating capitalists, nor by hating Jews, but by common sense. A first-rate, moving performance.

The fact that this civil servant, when he is not on duty, is reading Hannah Arendt’s book on the study of totalitarianism, the book that the DDR says should be burnt, is telling.  The performances are impeccable and the meeting of these two in a hypothetically tense situation produces an explosive encounter which comes to a head in the first part as the East  Germans storm the wall in the first stages of its removal.

The Second part shows a radical shift in both their lives. brought about by the post-wall situation. East Germany is no longer a country. These two individuals are in a space where the mental constraints of their country are absent. Physical borders are not as strong as the mental borders that have been constructed and imposed by the regimes in power.

The play thus reveals important questions. What happens when one is brought up in a regime of unmovably strict beliefs and behaviors when suddenly all the constraints are removed?  How does one fill in the mental gaps?

The play deals with this in a very stealthy way, apparently leaving much to the choices of the director.  Orr ended his own performance by trying to impose a more ambiguous and sophisticated denouement which was not necessary because it was all clearly already laid out in the text. By tweaking his ending just a bit, he will have a taught thought-provoking play that shocks the onlooker but that turns into a tightly constructed piece of theatre.. let’s see how Orr gets out of this dilemma.

This article was originally published in the Capital Critics Circle on February 18, 2019, and has been republished with permission. 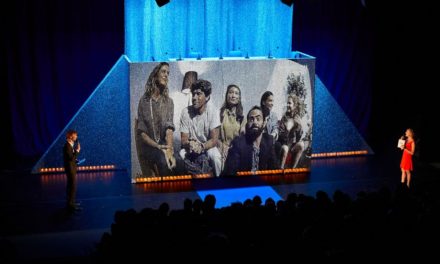